The Music and Magic of Québec City 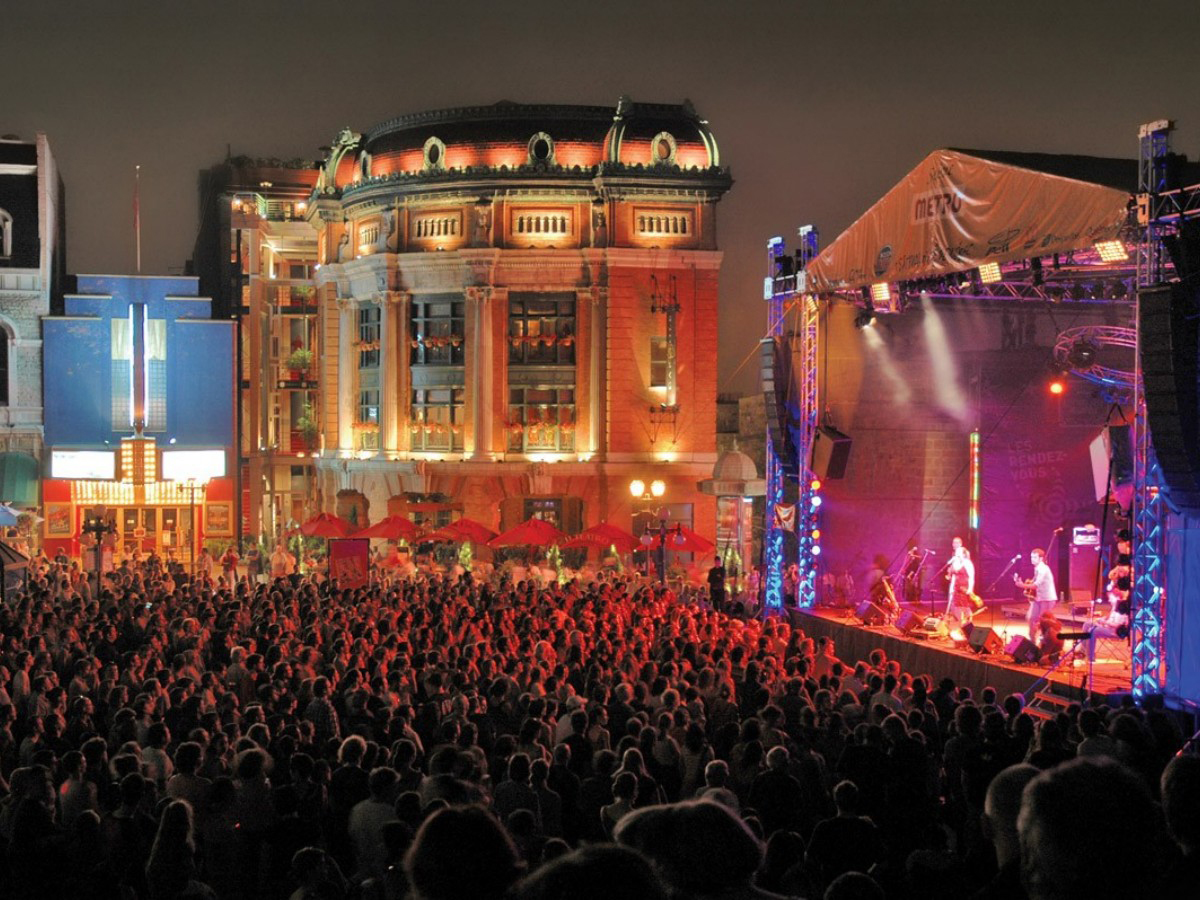 Where can you go for a musical experience that spans everything from rock ’n’ roll to jazz, electronica, pop, blues, heavy metal, and more? Québec City’s Festival D’été (the Festival of Summer). This music extravaganza draws international crowds for 11 days every July; this year it runs July 4–14. During the festival, an impressive assemblage of musical venues dots the town, and Québec City is transformed into the largest outdoor music festival in Canada.

On its own, Québec City is an enticing destination. The natural charm of the city—with its historic features and culinary flair—makes it a prime destination. Add in the event-of-the-year music festival in July, and the city becomes a sensation. “For visiting Québec City,” says native Gabriel Soucy, “July is the best time of the year.” Visitors who come during the festival can experience both the music and the magic of Québec for a multi-faceted adventure.

The Festival D’été has grown exponentially since its conception in 1968. What began as a celebration of Canadian artists has expanded to encompass styles of music from around the globe. In 2012, close to a thousand artists performed in shows scattered throughout the city. A festive ambiance permeates the town as guests mingle and visit the various indoor and outdoor venues. The festival offers tickets for specific performances, day passes, and festival passes that span the entire 11 days. Last time Soucy attended the festival, he purchased the 11-day pass for a mere $65. “It’s kind of like a passport that lets you go anywhere you want,” he shares. “It’s definitely worth it.”

Hundreds of artists perform in venues like this one in the heart of Québec City.

Festival-goers are free to wander throughout the city, catching their favorite artists and exploring new musical tastes. Massive crowds gather to see the big-name performers—artists like Aerosmith, LMFAO, Sarah McLachlan, Our Lady Peace, Bon Jovi, The Offspring, and Skrillex, all of whom headlined in 2012. This year’s lineup will include Bruno Mars, Ellie Goulding, Belle & Sebastian, and Lisa LeBlanc, to name a few.

“They do really good shows with fireworks and special effects,” says Soucy. “And at smaller venues you can find new artists you didn’t know about. That happened to me the first time I went.” Soucy attended a performance by rock band The Heavy and enjoyed the unexpected warm-up act by a DJ artist called Kid Koala. “He did a kind of jazz with turn tables,” Soucy remembers.

The festival offers a power-punch of musical excitement. And if festival-goers want to stray from the music scene for a few hours, the rest of the city is just waiting to be explored.

The festival takes place in and around Old Québec. Built 400 years ago, this city is one of the oldest settlements in North America. Entering Old Québec feels like stepping out of Canada and into a slice of old France. “The European architecture is rich here,” Soucy says. “It’s mostly from France, which is really cool.”

The area is one of the oldest European settlements on the continent. Steeped in historical significance, Québec City was declared a world heritage site by UNESCO because of its unique historical value. Old Québec is the only walled city north of Mexico. It is surrounded by the original 40-foot-tall stone wall that France erected centuries ago to protect this outpost.

The city exudes charm. Wide cobblestone streets wind between buildings crafted from sixteenth- and seventeenth-century stone. Specialized shops line the Rue St-Jean, a central plaza in the heart of Old Québec. Towering over it all, the Château Frontenac sits on a ridge overlooking the St. Lawrence River. This spectacular Victorian-style castle is now refurbished as a lavish hotel.

With its French heritage comes a tradition of fabulous food. So Old Québec is the place to go for French-style pastries and fine dining. The bistro Chez Boulay creates mouth-watering dishes using only ingredients that are found above the 49th parallel (the circle of latitude that runs roughly along Canada’s southern border). Menu items include flavors like bison, local cheeses, salmon, and wild berries.

Minutes away, the Érico Choco-Musée offers a museum’s insight into the history of chocolate. Here guests can learn how chocolate has evolved over the years and can watch artisan chefs make chocolate right before their eyes. Admission is free, but visitors may want to spend money in the museum bakery. Varieties of fresh gourmet chocolate line the walls. In the summer, the bakery offers 69 flavors of homemade ice cream.

Old Québec is also famous for a true Québecois classic: poutine (pronounced pu-teen). This rich dish is made with fresh-cut fries smothered in thick gravy and dotted with cheese curds. Poutine is such an entrenched part of the culture here that it is even served at the local McDonald’s. “Lots of people know about poutine,” Soucy says, “but not a lot of people know that Chez Ashton, the restaurant that made poutine famous, is found only in Québec City. They have the best poutine.”

Outside the city, the beauty of the countryside unfolds. Stretches of forest reach northward, and the St. Lawrence River shimmers to the east. Ferries cart visitors across the St. Lawrence to the town of Lévis (pronounced luh-vees). “It’s a 15-minute ride,” Soucy says, “and on the other side, you can get a great look at Québec City.” Back on the mainland, Montmorency Falls is an impressive stop. This 272-foot waterfall behemoth cascades for a distance equivalent to 20 stories. Visitors can admire the view on foot, by boat, or via the cable car that stretches across the falls.

Visiting Québec City during the Festival D’été is like living a choose-your-own-adventure experience. The city is a great destination spot on its own, but throw in the Festival D’été and you’re guaranteed a fantastic trip— everything from countryside and castles to cuisine and concerts. The variety and excitement of the festival and the host city work hand in hand to offer a splendor that can appeal to the palate of any traveler.