Summer 2013 Tales from the Trip 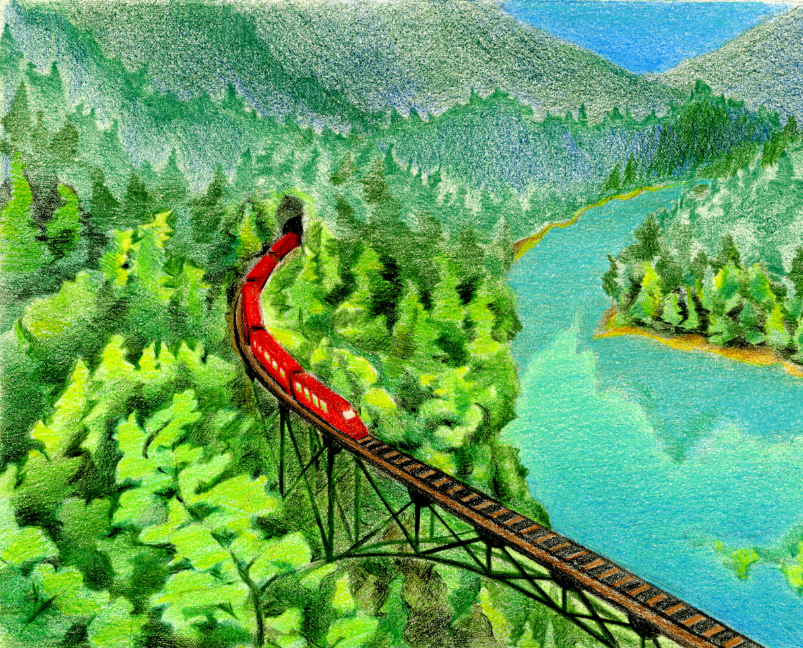 Chest heaving, legs pumping furiously, and hands aiding my lurching strides upward, I glanced to my left to see my father and siblings gliding toward me on the other escalator. No, I was determined to be victorious! I redoubled my efforts and continued battling the pull of gravity.

It was the end of a long day at the Happiest Place on Earth. Rides had been ridden, snacks eaten, screams given, and all of us were in that pleasant state of exhausted satisfaction.

Before I knew it, we were headed toward Disneyland’s vast parking garage.

Because it was closing time, there was a traffic jam of people at the ascending escalator. However, the escalator’s descending twin remained vacant, mournfully continuing its downward slide. My father turned to me.

“Bet you can’t reach the top before I can.”

What? My father was actually daring me to run up the down escalator? Dreams really do come true!

Looking back, I realize how wholly irresponsible it was of my father to ask this of me—and how completely imbecilic I was to agree. But what can I say? We were drunk on Disney air. Rational thought was not part of that equation.

So there I was, risking my life at my father’s whim. While he stood calmly and watched, I was that idiot child working 12 times harder than necessary to reach the top of the parking garage. But, gosh dang-it, I was going to win this race.

I was three-quarters of the way up when my right foot slipped, slamming my kneecap down on the edge of the step in front of me. I quickly got back to my feet and muscled through the pain, cursing the loss of altitude that brought me neck-and-neck with my competitors on the lazy side of the stairs.

It took a Herculean effort, but I made it to the top a whole three seconds before my family. Victory!

Of course, it wasn’t until I had taken a couple of steps toward our car that I realized I had rivers of blood running freely down my leg from two puncture wounds on my knee. I still carry those scars, which look for all the world like some giant purple snakebite.

The pain was obnoxious, but the triumph was worth it.

Of course, having my mother and grandfather carry me to the truck was an added bonus.

Pants for Paintings in Cuba

I’ll never forget when my friend and I traded some clothes and an old backpack for three custom-made paintings in Trinidad, Cuba.

When in another country, I personally subscribe to the rule never to buy any sort of knickknack, sit-on-the-shelf-and-collect-dust souvenirs (a lesson I learned from my mother). I was more interested in casually talking to people in the street. My friend Tallan, on the other hand, was on the prowl for some good art to bring home.

I came across a portly man whose name I can’t remember—we’ll call him Damian. He was a painter by trade and was selling his own paintings right out of his house. After we made some small talk about my trip and his paintings, he started talking about something completely unexpected: my pants. “Ay, chico, those are some nice pants. You really don’t see that kind of quality here.”

I looked down. Nothing special; just a pair of normal, everyday jeans I had picked up at Walmart for 20 bucks.

“Tell you what,” he continued, “since we’re both gordos, and those pants would fit me well, if you see any painting you like, we can talk about exchanging your pants for a painting or two.” While the notion that this heavy man could possibly fit into my jeans hurt at first, a business proposition suddenly occurred to me. I didn’t want art, but I desperately needed cash since I had already spent most of mine on irresistible Cuban cuisine. But Tallan had cash. And he wanted paintings.

The next day we returned, armed with goods to bargain with. I laid my pair of jeans and a hooded sweatshirt on the ground. Tallan laid out his bathing suit, a shirt, and his old backpack—practically everything he had brought with him on his trip.

After an hour or so, Damian waved us goodbye, content with his “new” pair of jeans, a hooded sweatshirt, a T-shirt, and a backpack. Tallan walked away with three large paintings and two small ones. And now Tallan owed me 30 dollars and one of the small paintings. All three of us had done very well that day.

Every time I look at that small painted figure of Che Guevara upon canvas that now hangs on the wall above my bed, I remember how small yet special that moment was. It might sound funny, but knowing that my pair of jeans is still in Cuba, being used by an artist as he tries to survive the struggles of his everyday existence, really makes the trip more special to me. Cuba has become a part of me, and in a way, I have become a part of it.

The train pulled into the small station nestled in the Italian Alps. From here on, only buses could make the steep terrain to Cortina d’Ampezzo, and we had an hour before boarding. We were in our last few days of a month-long camping trip through Europe, and we’d taken only one shower up to that point.

Lucky for us (and even more so for those forced to deal with us and our smell) a long, slender lake sat in the valley not far from the station. We walked down the lush hillside to the edge of the smooth teal lake. Apart from the bright blue sky, everything was warm and monochromatic green.

To keep our clothes from being wet the rest of the trip, we left them on the shore and slipped into the water. About 100 yards away stood a small island covered in trees. We swam to its shores and found a thick forest with a soft carpet of moss.

“Well, I’m going for a run!” one of us yelled. We shot through the forest, running between and around the trees. It didn’t take long to make a loop around the island and get back to the shore. That’s when we saw, back on land, a man with binoculars. We crouched down and jumped back into the water. We were startled, but we’d heard that it is not a big deal to swim without clothes in Europe, right?

As we swam back, we noticed another person on the slope where we had left our clothes. He tried to make it down the steep trail leading to our clothes but turned back to avoid slipping. More people came. As more people gathered, I became more and more nervous. “If this is okay in Europe,” I wondered, “why is itgathering such a commotion?”

Back on the shore, we quickly hopped out and put on our shorts. We had no choice; the group stood between our packs and us. We climbed the ridge and were faced by a group of five people, accompanied by a park ranger. There was a silent tension for a moment.

Then a woman in the back yelled out, “Bravo! What courage!” They were impressed by our ability to swim all the way out to the island—and had come to congratulate us. They welcomed us and wished us luck.