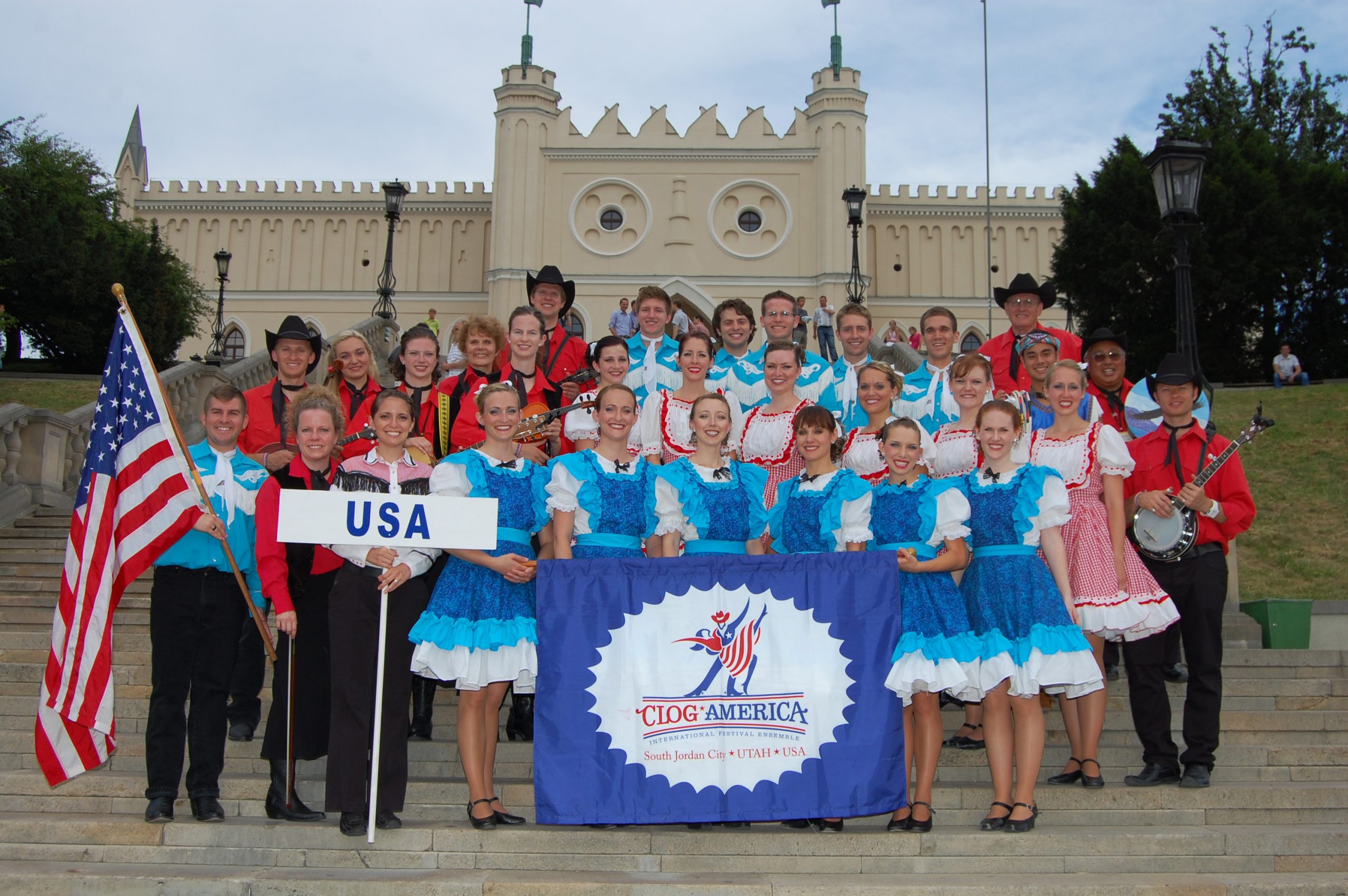 Clog America at the Royal Castle in Lublin, Poland.

Among the old, castle-like buildings of Zamość, Poland, the cloggers of the Clog America dance team buck, toe trick step, double double, and slide across the giant stage in the middle of the town square. The dancers and live musicians perspire in the summer heat as they perform to “Five Foot Two, Eyes of Blue” by Art Landry. They are in Poland to strengthen their music and dance skills, to represent the United States, and to bond with other dancers from around the globe—all through American clogging.

What exactly is American clogging? It is a footwork dance style akin to tap but with more upward movement of the legs. It has a unique sound because of its looser taps on the bottom of the shoes. Clogging originated as a social dance in the Appalachian Mountains as early as the eighteenth century and has since become modernized and popularized. Traditional clogging, the style practiced by Clog America, is performed to American Western music such as “(Ghost) Riders in the Sky” by Johnny Cash.

Although clogging is cherished by communities throughout the United States, clogging is not known to most people outside US borders. Clog America is made up of young-adult dancers and musicians who are dedicated to their craft and who want to connect with people throughout the world through music and dance. The organization’s mission is to bring clogging to other countries and to celebrate the heritage of American folklore and folkdance.

Shawnda Bishop, founder of Clog America, had a love for clogging and wants to share it with the world. She had a dance studio in West Valley, Utah, but she wanted to expand her outreach. Bishop says that Clog America allows “the youth to develop a hunger and desire for travel and to have the experiences that show we’re all the same.” In 1990, Bishop asked Bonnie Romney to be her business partner, and Clog America was born. Since its founding, the organization has danced in the 2002 World Cup Soccer Games for its Celebration Art Festival in South Korea, participated in Russia’s 60th celebration festival of the ending of World War II, and seen the world through many other adventures.

Visiting the Czech Republic and Poland

In the summer of 2012, Clog America toured the Czech Republic and Poland, performing in weeklong festivals and staying with host families or in university dorms. They first went to Brno, Czech Republic, where they held a dance social with J Ánošíek Folklore Ensemble. The Clog America and J Ánošíek musicians played songs while the dancers performed for each other. At the end of the dance social, the two groups came together for a big disco that “lasted for about four hours,” says Bishop.

Clog America then went to Lublin, Poland, where it joined in a weeklong festival filled with parades, attentive crowds, and a performance in the middle of the town square. Next, they traveled to Zamość, Poland, which is Poland’s world heritage site. There they proudly held up the American flag and were invited by one gracious Polish family to eat a three-course meal at their home. The group enjoyed a wonderful night with this family, eating on fine china, and witnessing the hospitality of the Polish community.

Not only does Clog America participate in festivals, but they also do humanitarian work. In Lublin, they went to a regional children’s hospital, where they performed in the courtyard and gave stuffed animals to the children. “We wanted to make sure every child got something,” Bishop says.

Clog America also visited a summer camp for people with special needs in Zamość. One of the Clog America musicians raised close to $400 to donate to the camp through a project called Pennies for Poland. All the kids in her high school put pennies in a jar for a week. Bishop smiles about this story and says, “We try to give back to the countries that we go to.”

For Kaitlyn Gourley, a member of Clog America who performed in the summer 2012 tour, the best part of dancing in these festivals is growing close to the people. “This summer we got to meet teams and people from more than 20 different countries,” says Gourley, “and all of a sudden, the world seemed so small.” Gourley adds, “I was amazed at how similar we all were. We all experience emotions the same way—happiness, sadness, joy, pride—and I was amazed at how close we all became in such a short amount of time.”

Kaitlyn and Eric Gourley perform a difficult lift while clogging in Zamość, Poland.

Clog America isn’t just about clogging. To Bishop, Gourley, and each of the dancers and musicians, it’s about promoting unity. Bishop says, “This organization is so important because we need [American] representation in the world besides movies, media, and politics. We are doing a little something to promote peace.”

Want to see Clog America perform? Why not make it a vacation? Clog America is going to Haiti for their summer 2013 tour to the country’s first international folkdance festival. See the group clog the night away, explore the tropical sites of Haiti, and engage in humanitarian work at the orphanages Clog America members will be attending. To learn more, visit www.wwapa.org.

“Rock Around the Clock”—Bill Haley

“Ghost Riders in the Sky”—Johnny Cash