On Eating Insects: Bugs Bite—Is it Time to Bite Back? 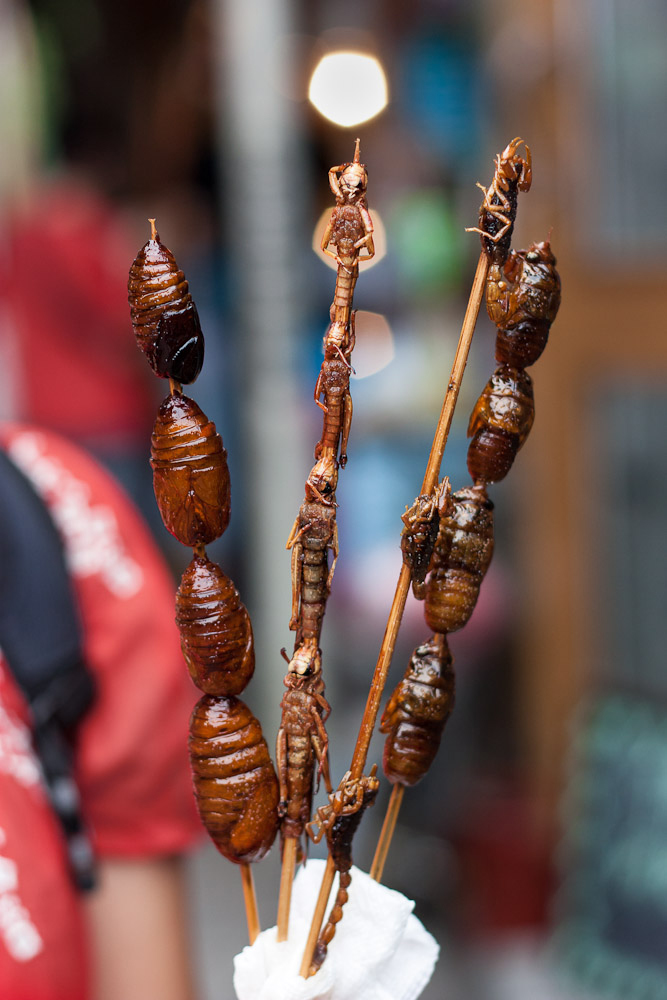 For westerners who consider an eight-ounce bloody slab of cow muscle to be mouth-wateringly delicious, a crispy fried grasshopper or mealworm should pose no problem. But let’s face it, it does. And the whole “facing it” issue may be the problem. If our food has eyes and a mouth and looks back at us, it causes a gut reaction—literally. But here are five ideas to consider about insect consumption that might help you overcome your squeamishness should you be offered something six-legged to eat during your travels.

About 80% of the world’s population regularly consumes insects, according to Florence Dunkel, an entomologist at Montana State University. Westerners are clearly in the minority. But even in the West, things are starting to change. Adventurous chefs out to please their well-traveled patrons are increasingly featuring insects on their menus, and these insect dishes have become quite a trend at high-end dining establishments. In September 2010, the Brooklyn Kitchen restaurant hosted an all-bug, four-course dinner at $85 a plate. Earlier that year, Specktakel restaurant in Haarlem, Netherlands, held two bug buffets, both of which sold out, and the restaurant always has at least one bug item on the menu.

That’s right. Americans consume an average of one pound of insect matter annually through unavoidable food contamination, not counting the 10 or so bugs we consume in our sleep each year. The average chocolate bar has eight insect parts in it, and this contamination can be as high as 60 insect parts per 100 grams of chocolate before the FDA will reject it as unfit for human consumption (https://www.fda.gov/RegulatoryInformation/Guidances/ucm056174.htm). Dr. Morton M. Teich, an allergist, says that many patients with chocolate allergies are actually reacting to cockroach contamination in the chocolate. When Dr. Teich, discusses this accidental insect consumption with his patients, he tells them that it is almost impossible to avoid insect matter in food. “You probably would have to stop eating completely,” he says. He also believes that attempts to reduce insect contamination would result in higher pesticide use, which would likely be much worse than eating a few bugs every year anyway.

Insects are nutritional powerhouses, higher in most nutrients and often lower in fat (depending on the species) than other livestock food sources. For example, according to Dunkel, a 100-gram serving of beef rib roast contains 24 grams of protein, 10 milligrams of calcium, and 3.5 milligrams of iron. An equivalent 100-gram serving of caterpillar (usata terpichore) contains 28.2 grams of protein, a whopping 355 milligrams of calcium, and 35.5 milligrams of iron. The caterpillar is the clear winner. Perhaps in the future we will encourage our children to eat their grubs along with their vegetables. (In spite of this amazing nutritional profile, if you are allergic to shellfish, you may be allergic to certain insects as well—in which case they would most certainly not be good for you. Proceed with caution!)

According to Aaron T. Dossey, a biochemist, entomologist, and founder of the biotech company All Things Bugs, “Insects hold great potential to contribute to global food security” in a way that also protects the environment. This is because there are edible species available locally practically everywhere, and they reproduce quickly. Insects also require much less space and water than livestock, have a much higher feed conversion rate, and often eat agricultural waste products that are inedible for people or for other livestock. On top of all of that, they produce fewer greenhouse gasses than cattle.

Quite a few bugs get two thumbs up in taste tests, even from westerners. Deborah Curtis, a daring actress and grandmother from Denver says, “For Halloween we make chocolate chip cookies with crickets in them. They’re delicious!” Peter Menzel, author of the book Man Eating Bugs, claims that a fire-roasted witchetty grub from Australia “tastes much like a tender cheese omelet rolled in a smoky phyllo-dough shell.” He also says that fried bamboo worms from Thailand taste “like salty crispy shrimp puffs.” You might even agree with him, but you’ll never know until you try it!

Ready for a Taste?

Many of the commonly consumed insects around the world are species of crickets, grasshoppers, ants, cicadas, and beetle grubs. Here are some especially popular insects you might encounter in your travels.

Large caterpillar of the emperor moth that can be eaten dry and crunchy or covered with a sauce after cooking.

Larva of a moth that feeds on the inner pulp of bamboo that is eaten as a snack like potato chips (fried and crispy on the outside while slightly gooey on the inside).

http://www.foodinsectsnewsletter.org/ (this site includes a 52-page report listing the majority of known edible insects from all over the world)