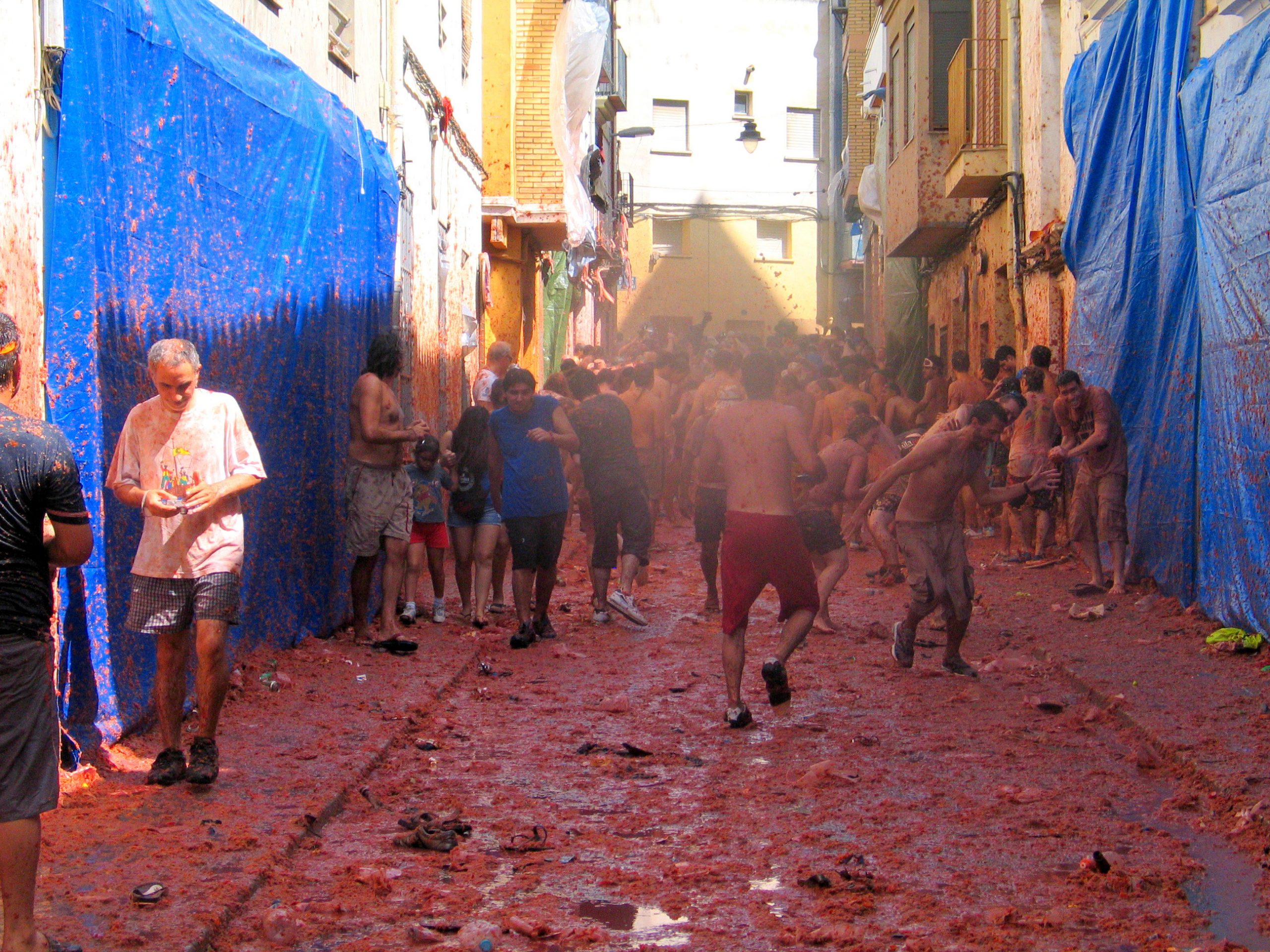 You know that stinging sensation you feel every time too much water flushes up your nose?  Imagine a complete stranger smashing handfuls of overripe tomato pulp in your face, while people swarm around you—jumping, throwing, and diving through waves of tomatoes.

You can experience this chaotic, good time for yourself at La Tomatina Festival. In the tiny village of Buñol, Spain, on the last Wednesday of each August, about 40,000 people gather to throw one hundred tons of tomatoes at each other. The festival is the world’s biggest food fight. It has only one unspoken rule: smash the tomatoes in your hands as you throw them in every direction.

The people of Spain know how to throw a party. The giant food fight is part of a weeklong festival that attracts people from all over the world. The tickets sell out each year long before August.

Even though this festival is wildly popular, no one really knows how or why it originally began. Rumor has it that the festival first began in 1945, when several rowdy boys began fighting during a parade and started throwing tomatoes at each other. Some believe the boys might have begun throwing tomatoes as a protest against local officials. Either way, the police quickly stopped that first fight and arrested the boys, but the boys planned a similar fight on the same day the very next year. The food fight soon became tradition and grew into a large festival.

Spain is famous for its culturally significant and religious festivals, but this particular festival is just for fun. La Tomatina Festival was banned for many years by the Spanish dictator Francisco Franco for its lack of religious significance. After his death in 1975, the festival was started up again, and it continues to draw more and more visitors each year.

On the actual day of the food fight, city officials and cleanup teams secure the streets of Buñol with plastic tarps and safety netting. Hoards of people commute in from their hotels in Valencia and crowd into the narrow streets of Buñol wearing white T-shirts and white shorts.

People from all around the world join in the tomatoey chaos.
Photo by Viajar24h.com

“The spectacle draws people in,” says James Davis, a tourism specialist. “There are various types of tourism, and with the growing accessibility to media, it doesn’t take a lot to make an event popular.”

Before the tomato trucks roll in, several participants compete to climb to the top of a greased pole to reach the ham tied on top. The crowd surges as throngs of men climb over one another to try to reach the ham first. Giant fire hoses soak the streets with water as soon as the ham is reached, and the massive food fight begins. People dive into the trucks full of tomatoes, and revelers begin to squish and throw the rotten and overripe fruit everywhere. Tomato pulp floods the streets, and participants swim through rivers of red as they toss smashed tomatoes at each other. People get wildly drunk and have a crazy good time.

The food fight lasts for hours. When it is finally all over, the tomatoes juice is washed from the street by the fire hoses, and the streets are clean again.

Even though you might put yourself at the risk of having overripe tomato juice burn down the back of your throat, it might be worth it to experience the chaotic fun of this unique Spanish festival.

Food Fights around the World

La Tomatina Festival has become so popular that others have recreated this giant red food fight in venues around the world.

Sutamarchán, Colombia—participants gather in a football field to throw tomatoes on June 14.

Australia—the Australian company Click4specs holds a biannual food fight in March and October, where employees can throw tomatoes at their employers.

India—multiple planned festivals were banned because the government decided that they would be a waste of food.

Video Game—Namco has even created a virtual food fight for a video game.