Bazinga! Get Your Geek on at Comic-Con 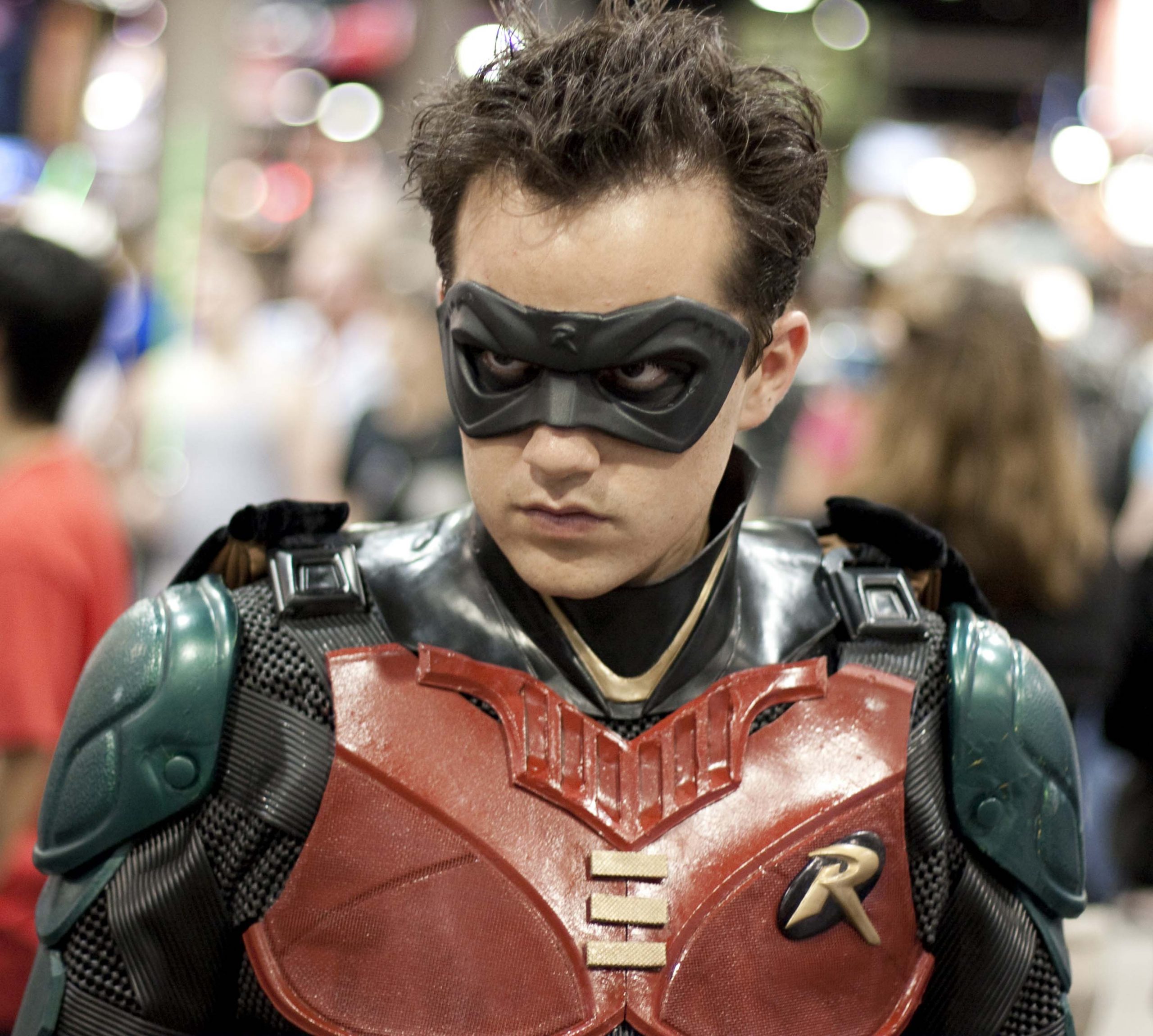 Robin waits for the Bat-Signal.

Stephanie Wilson of Portland, Oregon, was sitting on the curb at the Gaslamp Quarter—an area directly across from the San Diego Convention Center—waiting patiently to go grab dinner with some friends. Suddenly, a swarm of zombies emerged from around the corner. “At this point, it didn’t even matter that my friends were late because, well, zombies!” says Wilson.

Zombies and other creatures in costumes are common at San Diego Comic Convention. This international convention, known colloquially as Comic-Con, runs for four days each July. This year it will run from July 18–21. What started 40 years ago as a gathering in the basement of a hotel has grown into an event that draws more than 150,000 people to the San Diego Convention Center each of the four days. Though created to showcase comic books and science fiction/fantasy films and television, the convention has now grown to include video games, collectibles, anime, and other kinds of pop culture.

The Comic-Con event uses two levels of the large San Diego Convention Center. After purchasing a $150 badge—the price for a four-day pass—Comic-Con attendees are free to explore. The first level of the event is an open floor filled with booths. The space is so large that companies like AMC and Marvel buy up huge areas of the floor to create full-scale television and movie sets as their booths. One year, Marvel recreated Thor’s Golden Throne; another time, AMC built one of the houses from its zombie series, The Walking Dead.

The second floor of the event is used for forums, which anyone can attend if they are willing to wait in line several hours beforehand. These forums include panels of famous movie and television casts, such as the actors from Supernatural, Twilight, and The Big Bang Theory.

To be involved with Comic-Con, studios, networks, and publishers send proposals explaining their potential event exhibits. Comic-Con then decides which exhibits would interest attendees most and would showcase diversity.

He might not have his cart, but Mario and his mustache make their way around the convention.

The beauty of Comic-Con is that it is different each time. “It varies every year,” says Barbara Staigerwald of Baltimore, Maryland, “but you’ll still find Robert Downey Jr., Stan Lee, and casts of shows like Dexter and Arrow, plus tons of amazing comic book-related artists.” Staigerwald is the editor-in-chief of www.whennerdsattack.com, a website that novice Comic-Con attendees can use for tips, news, hotel reviews, etc. “There are screenings, Q&A panels, costume contests, and more,” Staigerwald says. “There really is something for everyone.”

One of the most iconic aspects of this event is the tradition of wearing costumes. Every year, attendees dress up as a variety of famous characters from movies, television, or comic books. Joseph Slinker of Provo, Utah, says costumes are a major part of the novelty. “You always see tons of Storm Troopers and Princess Leias,” Slinker says. He first attended the event in 2009, coming mostly for the illustrators and artists. When he came back in 2010, Slinker’s group embraced this novelty and dressed up as Harry Potter characters. “We just robed up and got matching ties and badges,” says Slinker.

Pop in for Pop Culture

While costumes are a continual feature of Comic-Con, many other aspects change as Comic-Con assimilates more types of pop culture. For example, in 2011, Stephanie Wilson went specifically for the TV shows Doctor Who and Supernatural. Similarly, Staigerwald attended Comic-Con in 2010 because of the appearance of the TV show Dexter.

Staigerwald believes this new wave of pop-culture fans has positive effects. “There are some people out there that don’t like the influx of ‘new blood,’” says Staigerwald, “but why hate? That young girl who shows up because of The Big Bang Theory might end up finding a comic book to love.” Slinker agrees: “If you want to be a hipster about it, then be a hipster and find some unknown convention. But don’t complain about the one that is like the pinnacle of nerdom and pop culture. You can’t bag on that.”

Crowds of more than 150,000 people gather daily at the San Diego Convention Center for events and exhibits.

Geek Out to Fit In

Stephanie Wilson believes that regardless of why they come, everyone can enjoy Comic-Con. “There’s something for every geek,” she says. “There are comic books, movies, TV shows, even web-based content and books. Comic-Con is a place where we can all geek out together, even if we’re geeking out about different things.”

Whether it’s spotting Robert Downey Jr. or witnessing a swarm of zombies, Comic-Con offers camaraderie for all kinds of fans. As the zombies passed by Wilson on the curb, she enjoyed the moment. “It didn’t even matter if they were there for comics or movies or whatever,” says Wilson. “We were all having fun together.”