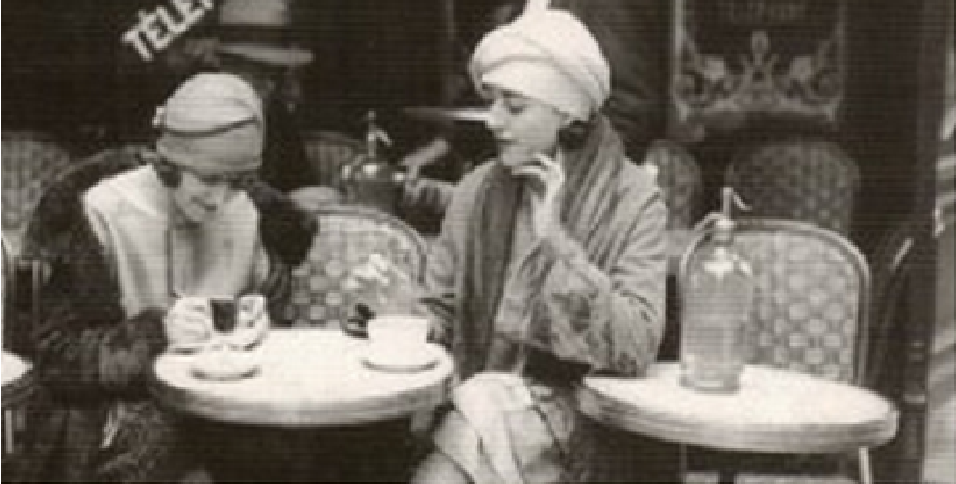 Longing for another time or place isn’t a concept singular to the twenty-first century, but we have definitely mastered it. Nostalgia is everywhere: In our music. Our movies. Our television shows. Our clothes. Our books. We seek the retro fashion of the 1960s or ’80s. TV viewers are mesmerized by award-winning dramas like Downton Abbey and its depiction of Britain’s servants and elite of the 1920s—or Mad Men’s business executives of the ’60s. We dream about the beautiful culture of Paris in the 1890s. Books take us to cities and times that are not our own. In a time when war and political conflict are common, we often yearn for the earth’s simpler “golden” ages.

Sometimes it would be nice to just shut your eyes, drift away, and appear in another place. A character in Woody Allen’s nostalgic movie Midnight in Paris came to this conclusion: “That’s what the present is. It’s a little unsatisfying because life is unsatisfying.” Maybe he was on to something. When the present leaves something to be desired, why not take a break? When you’ve run out of vacation time or you’ve barricaded yourself inside a humid, cramped apartment to wait out winter’s frigid temperatures, stop a minute, take a trip, and travel back through time.

First stop: the greatest fair in America’s history. Because what is more reminiscent of the golden era than the world’s first Ferris wheel? In the late nineteenth century, the city of Chicago was much different from the teeming metropolis of nearly 10 million people that it is today. Oprah was yet to be born, deep-dish pizza was decades away from being invented, a Lutheran Seminary stood where Wrigley Field would be built, and the nightmare that is Chicago O’Hare Airport was a problem world travelers did not yet have to tolerate.

In the 1890s, Chicago is preparing for the four-hundredth anniversary of Christopher Columbus’s landing in the New World, and thus the World’s Columbian Exposition—otherwise known as the Chicago World’s Fair—is born. Spanning three months, the fair features hundreds of newly designed buildings hosting groundbreaking electricity exhibits that could leave your arm hair standing on end, along with freshly painted carnival rides, live music, arts and crafts, and some of the first fair food. Of course, food is always a large motivator for attending fairs and festivals. Just think—tasting the original Cracker Jacks. That’s right, you won’t care if you never get back (to the twenty-first century, that is).

While wandering through the buildings, taking in new inventions, galleries, or lectures, you might run into the likes of Susan B. Anthony, Alexander Graham Bell, Thomas Edison, Fredrick Douglass, President Grover Cleveland, or thousands of other dignitaries from across the world who attended the fair.

But rubbing shoulders with the rich and famous of the turn-of-the-century would not be the highlight. Chicago itself is the fair’s main exhibit. Dubbed the White City, the architecture and lighting make 1893 Chicago a sight to behold, so much so that the alabaster city inspires Katharine Lee Bates in penning the lyrics of “America the Beautiful.”

Hubert Howe Bancroft wrote in The Book of the Fair in 1893: “It has been said that of all the marvels of the Chicago Exposition, the most marvelous is Chicago. However this may be, certain it is that the attention of the thoughtful visitor is attracted first of all to the city whose builders thus invite and entertain the world of civilization as their guest.”

As a time traveler, perhaps you are looking for a more exotic trip than a ride on a Ferris wheel, but you’d rather not sail across the world in the dregs of a 1900s boat accompanied with rats. Instead, just step out of the time machine on the shores of British colonial Hong Kong. You most likely won’t recognize it if you’re expecting to see the modern metropolis of today, full to the brim with seven million residents, a skyline of skyscrapers, and only a handful of old, historic buildings.

Though it has several million fewer inhabitants at the turn of the century and is not without political strife, don’t count this city’s earlier years out; Hong Kong is the New York City of the Far East.

The 1900s bring a tradition of trade, commerce, and culture to Hong Kong, and at the center is Victoria Harbor (named after the reigning British queen). Just a few years old, the Star Ferry Company offers a ride you must make during your time travels. In fact, you might just want to start there. Aboard the ferry, you’ll discover views of this Pearl City that aren’t possible from any other point.

But maybe boats are still not your preferred mode of transportation. Not to worry, because even in the time of British colonial Hong Kong, there is a tramway system. It’s the most tourist-friendly way to get around the city, even if the roads are yet to be fraught with traffic congestion. The tramway, recently opened in 1904, offers a first-class ride for a steal at just 10 cents a ticket.

Like foreign substances in oysters growing into pearls at the bottom of Hong Kong’s waters, the city is also morphing into a larger, more valuable colony. Hundreds of thousands of British

colonists are settling here, creating a surprisingly substantial social scene. While the Crown Colony doesn’t yet have famous celebrities like Jackie Chan or Bruce Lee, travelers can become acquainted with Victorian society at the racecourses or cricket fields while enjoying a combination of cultures in a cup of Hong Kong–style milk tea.

The City of Light

Jumping forward, we time travelers reach another golden era, this time in France (much like the France explored in Midnight in Paris, which left us itching to time travel in the first place).

It’s an era of jazz; they call it the Crazy Years. Like the music, the culture and life of Paris in the 1920s whisk you up and swing you around like beads dangling from the dress of a flapper dancing the Charleston.

Like Chicago during the World’s Fair, Paris thrives during this time as a hub for all things cultural. The City of Light has it all: Dance. Music. Literature. Art. Fashion. The men are dapper and the women carefree.

You won’t have to save up money to check out a music hall, theater, or operetta. Catch La Haut by Yves Mirande and Gustave Quinson or a less racy musical number at the infamous Folies Bergère. Motion pictures cost as little as 27 cents. Don’t forget to brush up on your French before you go, but if your vocabulary is less than sufficient, there’s always the option of finding a dance club playing the latest from Sidney Bechet and Louis Armstrong.

If you’re looking for a more intellectual visit to Paris, see if you can pop in and soak up some knowledge at the Sorbonne, which is famous for attracting scholars from across the world, including many American writers. (In the twenty-first century, the Sorbonne no longer functions as a singular university, but is more like a conglomerate of research institutions.)

Craving more creative inspiration? You can never go wrong with meandering through the Montparnasse area, where clubs and
cafés line the streets. Not too far from the Sorbonne is the renowned Café de la Rotonde; although it still exists in modern days, its golden days were the ’20s. When you stop to have a drink, you might encounter famous artists like Picasso, Diego Rivera, or Modigliani. At the very least, you are sure to encounter some of their works that cover the walls of the café. If you’re lucky, some creativity might rub off on you too.

No trip to Paris is complete without indulging in fashion, regardless of whether you’re a man or a woman. That said, the 1920s is a time most twenty-first century women would be comfortable with. Suffocating corsets are out, and new (and a tad rebellious) trends are in: heels, makeup, perfume, short haircuts, and dresses that show off your gorgeous gams. In 1924, Coco Chanel is designing costumes for Ballet Russe and orchestrating the commercial debut of Chanel

No. 5. Chanel’s perfume isn’t the only fashion classic created in the ’20s. Modern men visiting Paris can tip their straw boater hats off to the ’20s for altering suits for the coming century. Wide-legged pants are a marked difference from the decade’s previously short, straight trousers and military jackets.

Whether you’re looking for a distraction from the twenty-first century or wishing on your birthday candles for a few decades past, put your handy time machine to use and step away for a second from the humdrum of your daily schedule. Forget the naysayers with their dream-crushing insistence on sticking to current “reality” and discounting the extraordinary. Where will your cultural globetrotting take you next? Dream big—and then time travel to any city whose past reaches out to you. And expand your life decade by decade.