Pave Your Own Pilgrimage 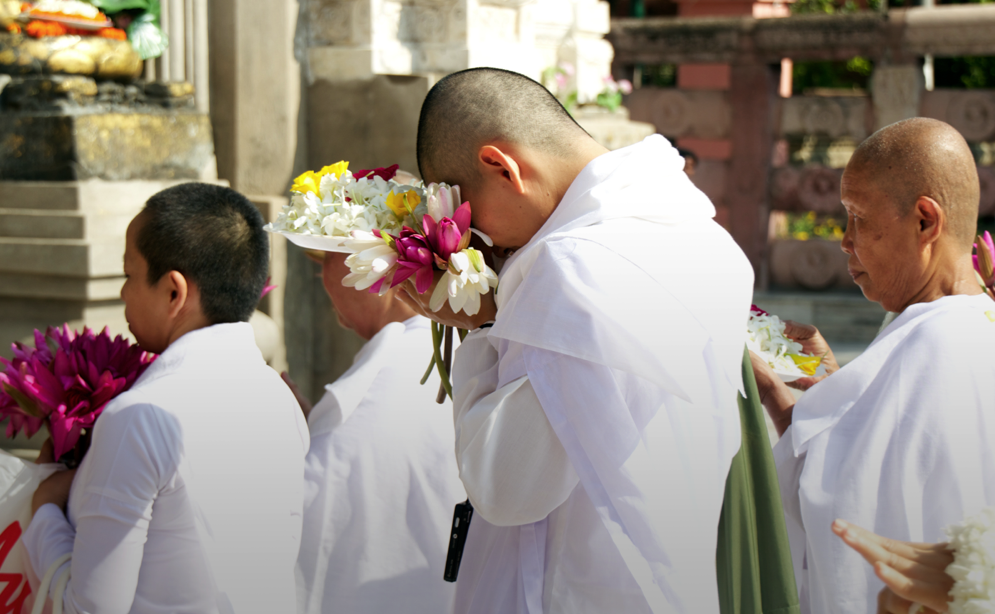 Heidi Reyes knew her trip would be an exciting new experience, but she could never have guessed the lasting effect it would have on her life.

After visiting the main sites of Buddha’s life, Reyes found that she learned so much more about this religion and culture by actually walking the same paths as Buddha.  Because of this experience she has continued to learn by taking an online course in Buddhism.

“It helped that I could hear teachings in the places that were important in the life of the Buddha,” Reyes said. “Each of these places has its own feel. As we went to each place, I found myself imagining what it must have been like in the day of the Buddha.” Reyes said although there were several other tourists, the sites were still filled with a sense of tranquility. “It was definitely worth it to go and see these sites,” Reyes said. “The memories are indelible.”

It doesn’t matter which religion or culture you belong to; by visiting places that are a part of your normal life or outside of it, you have the opportunity to gain a world of understanding. Buddhism, Christianity, and Islam are only three of many different religions that offer an intriguing history. Read ahead to see some of the major historical locations that these three religions have to offer.

“If you speak or act with a calm, bright heart, then happiness follows you, like a shadow that never leaves.”

Siddhartha Gautama was born around 563 BC as an Indian prince who renounced his wealth and family in order to become an ascetic. Siddhartha recognized that Enlightenment wouldn’t come from indulgence, but through study and meditation. During this process, he became Buddha. Most of his teachings focus on how to understand oneself, cope with daily problems, and end suffering.

Whether you are searching for greater moral significance or are interested in the history and beauty of this religion, you can find both by traveling to the four holy sites of Buddhism: the Buddha’s birthplace, the site where he attained Enlightenment, where he first preached, and where he achieved parinirvana—the final nirvana that is given to those who have been awakened.

This is the birthplace of Buddha Gautama and was his home for 29 years. Come walk the same path that young Siddhartha took every day. His actual birthplace has been identified and is commemorated with the Asokan pillar, where a plaque marks the location as Buddha’s birthplace. Travelers journey to this city to chant and meditate from sunrise until sunset.

This is the location where Buddha Gautama is believed to have received Enlightenment, making Bodh Gaya the most important of the four holy sites. According to tradition, Buddha Gautama was traveling when he came upon the Bodhi tree. He sat under the shade of the broad tree, meditating for three days and three nights, before finally reaching Enlightenment. Following his Enlightenment, Buddha spent seven weeks meditating on what happened and then began to preach. Next to the legendary sacred fig tree is the beautiful Mahabodhi Temple, Bodh Gaya’s main monastery.

After attaining Enlightenment, Buddha traveled on to Sarnath. Along the way he met five ascetics and taught them what would become his first sermon. The Dhamek Stupa, built in 249 BC, stands as a monument in Sarnath to commemorate the special events that took place there.

Colorful temples and monasteries have been built in Sarnath, representing numerous Buddhist countries such as Thailand, Japan, China, Sri Lanka, and Myanmar, each one built in the style of the country it represents. These buildings give you a miraculous portrayal of sacred buildings built among the city’s ancient ruins.

This holy site commemorates where Buddha Gautama is thought to have attained parinirvana, merging with Brahman. After his death, Buddha’s body was taken east of the city to Makutabandhana to be cremated at the shrine of the Mallas. For seven days many assembled at the ceremony and festival that were held in his honor. Today you can walk around the large dome–shaped stupa, which is placed over a portion of Buddha’s ashes.

“Charity . . . rejoiceth not in iniquity, but rejoiceth in the truth.”

The apostle Paul, born in AD 5, was a Jew and Roman citizen of the Pharisaic tradition. According to the Bible, Paul, known as Saul before his conversion, persecuted the disciples of Jesus Christ. Yet while traveling to Damascus, Saul saw the resurrected Jesus—a sight that struck him blind. After three days his sight was restored, and the newly christened “Paul” began his extensive travels to preach that Jesus Christ was the Son of God.

Whether you have read all of Paul’s works or not, these ancient cities contain beautiful ruins and unforgettable memories. By visiting these locations, you may be amazed by what Paul and many other Christian missionaries accomplished.

Mamertine Prison and the Basilica of St. Paul, Rome

Many believe that the Mamertine Prison was where Paul was kept during one of his imprisonments. A sculpture of Paul and his fellow missionary, Peter, is on display in the prison. The lower room of the prison is said to be where Paul and Peter were tied to a column and where they converted their guards to Christianity. Rome is also home to the beautiful Basilica of St. Paul, constructed after Paul’s death and believed by many to be his burial place.

Located directly south of the Acropolis is a large marble hill, known as “Mars Hill,” where Paul is said to have given his famous speech on “the Unknown God.” Today, a bronze plaque with the Greek text of Paul’s sermon hangs at the bottom of the hill. You can walk up the steps to the top of the hill, where many great leaders have spoken.

Paul visited this ancient city while traveling on his second and third missions. It was here that Paul and Silas were said to have baptized a merchant girl, leading to their imprisonment. While imprisoned, Paul and Silas felt an earthquake that jarred the building enough to open the prison doors. The jail keeper was converted, and Paul and Silas were allowed to leave the city the next morning. According to scripture, Paul organized the first Christian community in that city and wrote two letters to the followers there. You can still see the ruins of several temples that were constructed because of Paul and other missionary influences.

During Paul’s time, the city of Ephesus was a large cosmopolitan, political, and economical meeting place. According to the Bible, Paul spent a large amount of time in this city during his second and third missions. You can sit on the stone steps of the Great Theater, where Paul is said to have preached. You can also visit ruins of the Temple of Artemis, which existed during Paul’s time. And you can walk down the street that connects the temple to the theater, charting what is thought to be a sacred procession Paul may have walked several times.

Muhammad is believed to be the messenger who delivered the final word of God—Allah. Generally, Muhammad is considered the founder of Islam, although not all Muslims share this belief. He was a restorer of faith from ancient prophets such as Adam, Moses, Jesus Christ, and others. There are several places on the earth today that have significant meaning to the followers of Muhammad.

Whether you are a part of the Muslim faith or not, visiting the holy cities of Islam can be extremely rewarding and fascinating. Experiencing these holy cities in person may bring a greater knowledge of and appreciation for Islam.

Welcome to the birthplace of Muhammad. One of the most sacred locations within the city is Jabal al–Nour, the “mountain of light,” where Muhammad is believed to have received revelation from Gabriel, leading to the revelation of the Quran. Because of these historic events, Mecca is considered the holiest city in Islam. All able Muslims are encouraged to visit this holy city at least once in their lifetime; today, many Muslims continue to make the annual pilgrimage known as the Hajj, which is held in October every year.

The second holiest city in Islam is Muhammad’s burial place. Walk where the final chapters of the Quran were revealed to Muhammad. The three oldest mosques in Islam are also found in Medina, namely Al–Masjid an–Nabawi (The Prophet’s Mosque where Muhammad is buried), Masjid Quba’ (the first mosque in Islam’s history), and Masjid al–Qiblatain (the mosque where Muhammad changed the direction of prayer from Jerusalem to Mecca).

This granite hill lies just east of Mecca and is known for being the place where Muhammad delivered his farewell sermon toward the end of his life. In Islamic tradition, this mount is where Adam and Eve—who had been separated for 200 years after being expelled from the Garden of Eden—were reunited and forgiven. Atop this hill, one can repent and be forgiven by Allah. Mount Arafat is one of the many stops for all pilgrims during the Hajj. Many remain on the hill all day and night begging Allah to forgive their sins and asking for strength for the future.

Dome of the Rock, Jerusalem

This mosque, different from all other mosques, is one of the most famous Islamic sites in Jerusalem. The Dome of the Rock is a shrine built over the sacred Foundation Stone and is where Muhammad is believed to have ascended into heaven. It was after his return that Muhammad called all people to join the Muslim religion. The outside walls of this octagon–shaped mosque are made of porcelain and contain many windows. The inside of the dome is lavishly decorated with several mosaics and Quranic inscriptions. This is the oldest Islamic monument that stands today.