Hidden in the Mist: A Maori Legend 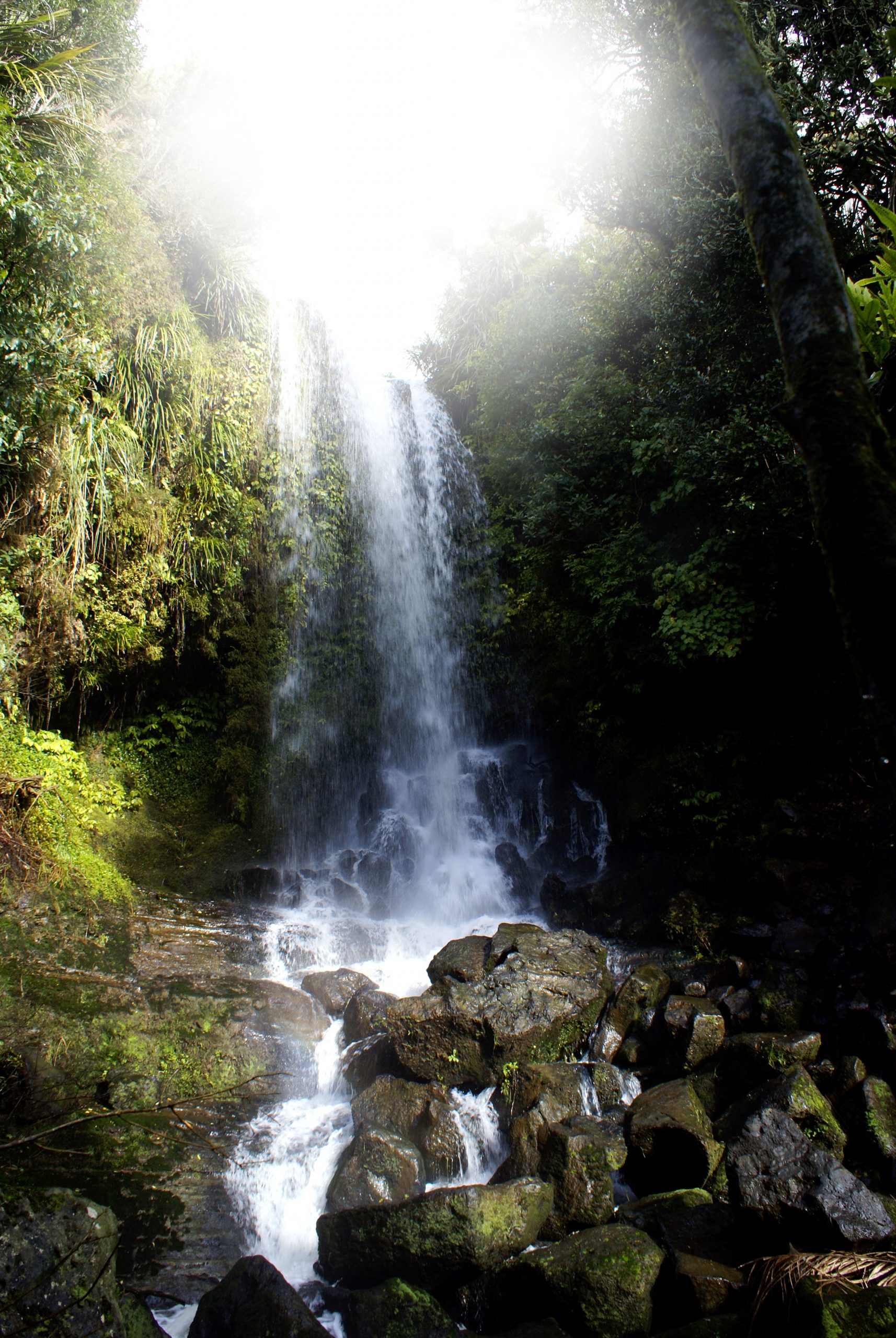 Legends dwell in just about every nook of New Zealand. One such legend tells of a dramatic way that Te Ruinga, a mighty warrior, tested his men’s bravery. To find the bravest men to fight against the tyrant Tapaue, Te Ruinga traveled to Te Wai Heke o Maoa (Maoa’s Waterfall). He dammed up the river at the top of the hill, while his warriors lay on the streambed below. When Te Ruinga released the water full force upon his soldiers, they did not flinch. Their bravery later led them to victory against Tapaue, freeing their people from his tyranny.

It has been many years since the time of Te Ruinga, but visitors still feel an almost supernatural connection-—known as mana—to the land and its history. American Anita Torres, a seven-year resident of New Zealand, felt that connection when she ventured with her daughter, Megan Andrews, on a “bushwalk” through Harker Reserve, home of the Te Wai Heke o Maoa waterfall in the city of Onewhero.

“When we stepped through the trees into the hidden land of the waterfall,” says Torres, “I felt the mana of the Māori warriors who had come to this place not only to prove their bravery but to draw strength from the power of the water and the land. It is a place outside of time, and the past seemed to be dwelling alongside the present.”

The atmosphere quieted as mother and daughter began their trek through the forest. It was as though they had stepped into Mother Nature’s private chamber. Trees rose high into the sky, diminishing the sunlight. “There was a broad path, and then suddenly we saw a little signpost inviting us to go off the trail,” says Torres. As they stepped off the wider trail, the less-traveled path became much wilder and more isolated, providing a more intimate experience and allowing them to lose themselves in the same forest that Te Ruinga’s warriors knew so well ages ago.

Torres and her daughter were greeted by the local fantails, one of the bird varieties New Zealand is known for. “As we trudged through the bush,” says Torres, “a little fantail danced along the path in front of us, encouraging us onward, chattering all the way like a cassette tape on fast forward.” The more the birds’ prattl-ing filled the air, the more the hikers delved into Nature’s territory, where trees grew close together and roots became their stepping-stones.

A powerful mist dowsed the visitors before they could even see the falls. But more astounding was the sight of the falls, cascading down 20 feet onto giant, moss-covered boulders. No barriers separated the hikers from the towering waterfall or from its roaring flow washing past.

Drawn to the power of the falls, Andrews stepped away from her mother toward the slippery rocks, determined to climb close enough to touch the water. “I was nervous that the water could drag me in and carry me away,” she says. “But when I touched it, I just felt so connected with this place.” The thrill coursed through her as she climbed back, soaking wet, to her mother.

The draw to the New Zealand wilderness is a call difficult to ignore. Just as the legend of Te Ruinga and the power of Te Wai o Maoa enticed these women to have a spiritual experience, New Zealand’s hallowed sanctuaries of time and nature still draw adventurers from around the world.