Chinatown: Beyond the Gate 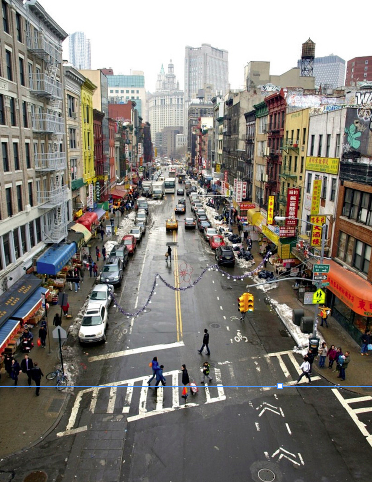 As a third-generation Chinese American, Christina Seid didn’t eat Panda Express until she was 20. “Real Chinese people don’t really eat General Tso’s chicken,” she says. There was no Panda Express where her family settled in Chinatown, New York City.
Seid grew up immersed in Chinatown and proud of it. “There are very few people who could say their grandparents grew up there,” she says. Seid’s home was in the suburbs, but she spent her days in Chinatown. Living elsewhere didn’t separate her from her roots.

When Seid’s grandparents immigrated to New York City from Guangzhou, China, in around 1920, Chinatown covered merely two blocks. It was a place for immigrants to gather for safety and solidarity. Those immigrants’ sacrifices built cultural havens for future generations, and Chinatowns worldwide followed suit, including 40 in the United States. You can discover the essence of these Chinatowns—that is, if you know how to find your way.

When a finger points to the moon, the imbecile looks at the finger

Just past the iconic Chinatown gates—a Chinatown staple—visitors are greeted by stacks of $3 T-shirts, overpriced jade trinkets, and tacky key chains. If you can get past the hoard of tourists, you may just find the proverbial moon—the true Chinatown.
There’s no secret to Chinatown except to choose your own adventure. Maybe you’ll find juicy, yellow loquats. Maybe you’ll buy some coconut cream buns. If you’re really lucky, maybe you’ll find a Chinese TV drama you didn’t realize was available in the United States.

One thing you can be sure of finding is good prices for good food. Seid says, “They pour their heart and soul into their restaurants.” You can feed eight people for $30 if you find the right restaurant. You don’t have to doubt its authenticity; businesses can’t survive solely off of tourists, and locals demand fresh food for the best price.

San Francisco’s is known for its historical ambience. The one in Yokohama, Japan, invites visitors through any of its nine gates to revel in its theme-park atmosphere. Toronto’s has almost anything you could ever want to buy, if you can find it: Maoist paraphernalia, herbal medicine, or Japanese comics. All Chinatowns have one thing in common: just by crossing the street, you feel like you’re not just in a different city, but in a different country.

When you say one thing, the clever person understands three

Chinatown may not seem immediately welcoming, as many adult residents don’t speak much English. This supposed barrier can dishearten tourists, but it shouldn’t. Culture shock is normal, but the barriers are only imaginary, especially when it comes to the language.

Residents of Chinatown are accustomed to dealing with foreign languages. Everyone used to speak Cantonese. But now many immigrants speak obscure Chinese dialects like Suzhou and Fujianese. “Basically, nobody can understand each other,” says Seid. “Cantonese and Mandarin—they’re so different already. Fujianese? It’s like if you spoke Swahili.” They’ve learned how to communicate with each other. You can too.

Consider the past and you shall know the future

Today, Chinatowns sprinkle the globe from the first ever in Manila, Philippines, to the recently renovated one in Incheon, South Korea. However, many Chinatowns have faded into the surrounding cities, leaving only about 20 of the original 40 that originated in the United States. Many second- and third-generation immigrants are eager to assimilate into their new cultures.
Chinatown is changing, Seid says. “I feel like it might be spreading out. Chinatown is not just our Chinatown.” Maybe it never was; Chinatowns are never static. You never know what you’re going to find, but one thing’s for sure: it will always be an adventure. All you have to do is reach beyond the gate.