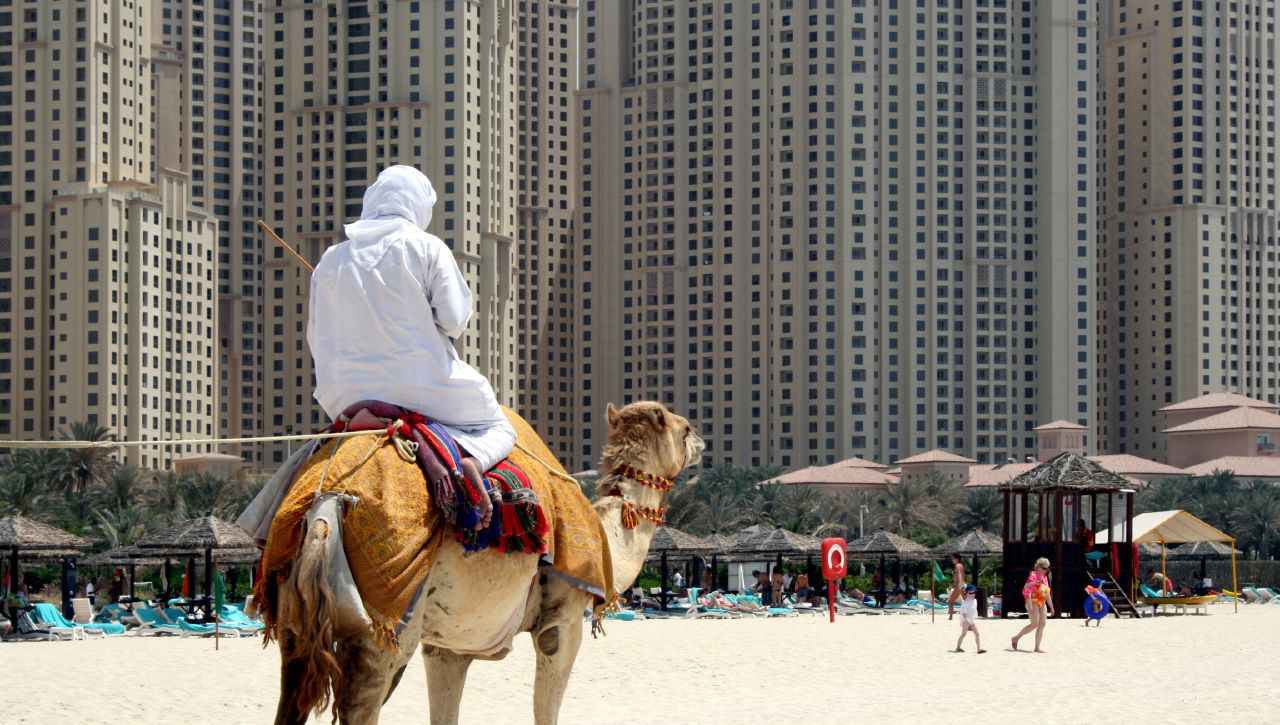 In the heart of the Middle East lies Dubai, the shining pearl of the Persian Gulf. Dubai is one of seven emirates, or political territories, that joined together to form the modern–day nation of the United Arab Emirates (UAE). The UAE is bordered by the Arabian Gulf to the north and the east, Saudi Arabia to the west, and Oman to the south.

The UAE is known as a progressive and peaceful nation, and Dubai—an emirate–turned–modern–city of three million residents—has grown to become so glamorous that it is known as “the Las Vegas of the Middle East.”

This contemporary city preserves Arabian tradition and Muslim values while embracing new technology, innovation, and cultures. Skyscrapers grace the skyline, and man–made islands and underwater hotels lie in nearby waters. Yet the city still boasts many traditional elements found not only in thousands of mosques but also in historic forts and in markets called souqs.

Because of its pivotal location between the Mediterranean Sea and the Indian Ocean, Dubai was established as a trade center on the route between Asia and Europe as early as AD 750. When oil was discovered in Dubai in 1966, the economy quickly expanded. With revenue from the newly found oil, Dubai transformed from a quiet town into a booming city—under the rule of Sheikh Mohammed bin Rashid al–Maktoum, who encouraged commerce and tourism. Since then, Dubai has continued to expand, emerging today as one of the most prosperous cities in the world.

Walking through the streets of Dubai, you’ll often find yourself among throngs of people from around the globe. Turbans, baseball caps, and hijabs (veils or scarfs worn by some Muslim women to cover their hair and neck) are everywhere. You may notice that people on the streets are of all colors and cultures: Sri Lankan, Palestinian, Canadian, Albanian. While nearly every culture and country is represented in Dubai, only 19% of residents in the UAE are of national Emirati descent.

Many people have found a comfortable lifestyle in Dubai, since companies are willing to pay employees well for uprooting themselves. Izzat Dajani, a resident of Dubai, says, “Dubai made it easy over the years for people to move here not just for work but to live and even retire.”

While you might think that this fusion of cultures would lead to conflict and culture clash, Kerri–Ann Prince, an American expatriate who has lived in Dubai for several years, thinks otherwise. “Dubai was and is still a trade center,” she says. “The city has always been very open to other cultures.”

Dajani agrees that the culmination of many nationalities has created something unique and beautiful in Dubai: “The prime objective for most who come to work and live in Dubai is economic. Most keep focused on that objective and in the process learn to work and live with other nationalities and beliefs. It builds tolerance. . . . It at least lets people listen.”

Since the culture and essence of Dubai is grounded in traditional Middle Eastern culture and Muslim conservatism, the influx of modernity has left its mark on this city. Once a sandy desert, the rising city of Dubai preserves its culture while embracing the twenty-first century.

History can be seen in Dubai because Emiratis work to preserve their ancient culture. Tradition is everywhere, with historic sites and cultural activities penetrating daily life. The Al Fahidi Fort, built in 1787, is the oldest building in Dubai. The fort houses the Dubai Museum, where visitors can learn about the history of the region, view antiques dating back to 3000 BC, and admire historic artifacts from Dubai. The fort was built to guard the surrounding area from invaders and has also been used as a ruler’s palace, a garrison, and a prison.

Souqs preserve the traditional Arabian shopping experience. Souqs are usually divided into sections of stores selling similar items. For example, spice souqs are made up of vendors in small stalls selling spices from around the world, displayed in small prism-like piles, and the gold souq will blind you with its glistening jewelry, beauty, and wealth. Souqs show a snapshot of the past and may be perfect places to catch old men in traditional thobes (long white tunics) playing chess or discussing business.

Arabians are very connected to the desert, where their nomadic Bedouin ancestors lived. Dune bashing—taking a car for a fast and bumpy ride across the sand dunes—is a popular activity for both locals and foreigners. Emiratis may take their own vehicles, while foreigners book trips with local companies who do the driving and prepare a traditional Arab meal of hummus and barbeque. Afterwards, both Arabs and foreigners sit on the ground to eat in a majilis, a patterned cloth tent that once served as shelter for the Bedouin tribes who settled the area.

While tradition and culture are respected and revered, Dubai has also explored new and exciting business ventures that embody modernity and innovation. The sudden wealth that has been found in Dubai has been invested in business as Dubai strives to create the biggest and best of everything.

Representing the height of Dubai’s modernity is Burj Khalifa, the tallest building in the world at over 2,7116.5 feet (828 meters) tall. Surrounded by downtown Dubai and the Dubai Mall, it comprises homes, offices, and the Armani Hotel. Recently featured in the latest Mission Impossible film—Mission Impossible: Ghost Protocol—the Burj Khalifa is definitely catching the world’s attention.

Dubai is also home to approximately 70 shopping centers, with the Dubai Mall being the most popular shopping destination. With more than 1,200 stores, it offers everything from Versace to Gap. Shopping isn’t the only thing happening at the mall though: an ice rink, a movie theater, an aquarium, and a small indoor theme park are all available for your entertainment. The stunning Dubai Fountain is also a main attraction, with a light, music, and water show daily.

At the edge of the ocean lies Atlantis, a new luxury resort located on a series of man–made islands in the shape of a palm tree, appropriately named “The Palm.” The Palm is the only place in the Middle East that offers the chance to swim with dolphins, snorkel with stingrays, and slide down a protected water ride that takes you through a shark tank.

The surprising fusion of traditional Arabian culture and new innovation has made Dubai an exciting and alluring destination. As cultures from all around the world coexist in peace in Dubai, so do tradition and innovation.