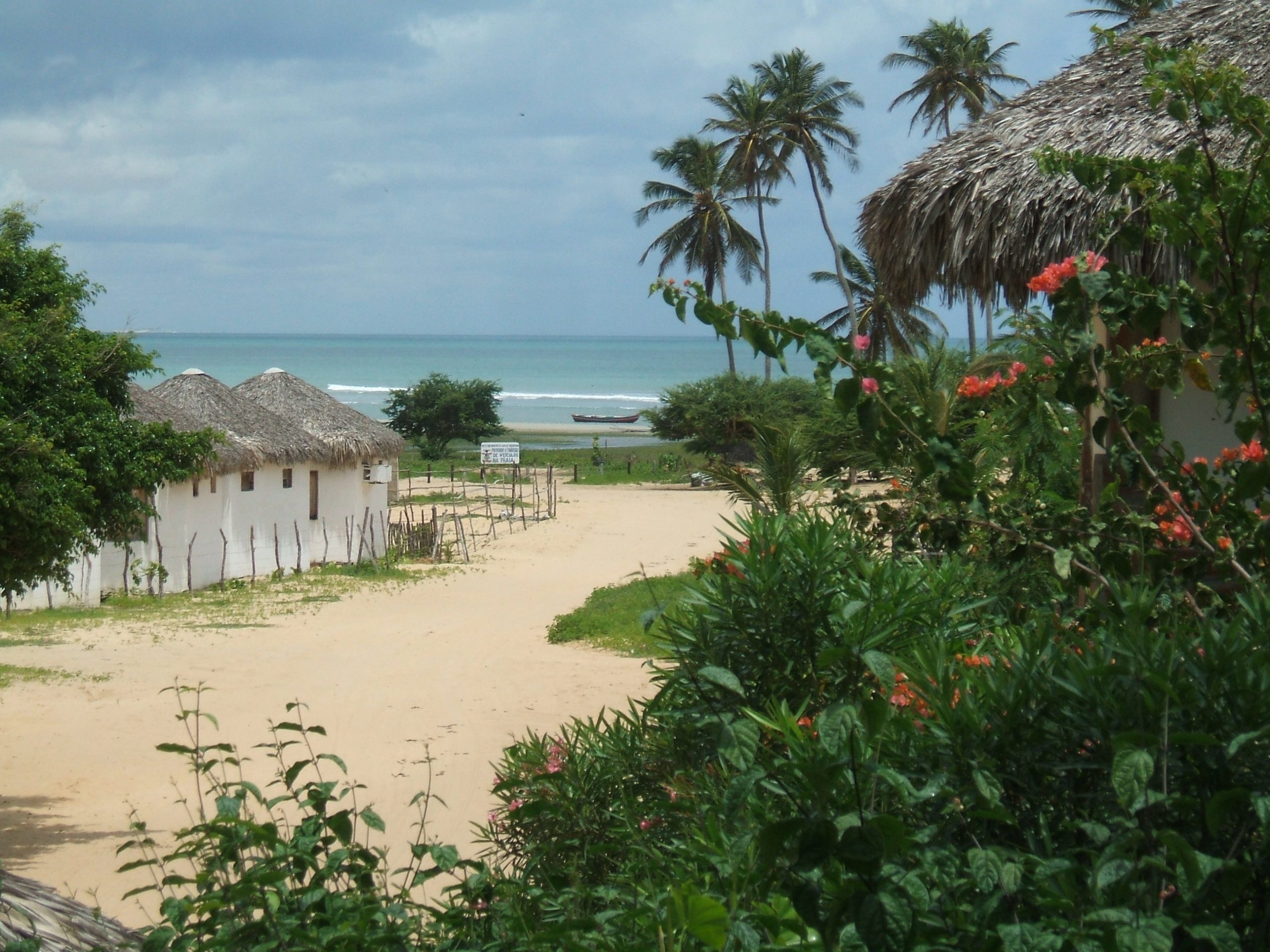 Photo by Sarah and Iain

Extending more than four thousand miles, the Brazilian coast offers flawless beaches from north to south. These endless beaches are perfect for relaxing, learning, having fun, and getting in touch with nature. Once you lose yourself on this hot, sandy trail, you’ll never want to leave it.

Relaxing in a sandy paradise

For several years, critics and magazine writers have declared Jericoacoara (picture left) the most beautiful Brazilian beach—and not without reason. Jeri, as it is sometimes called, is a fishing village with sandy streets, and it is known for its vast array of native vegetation. In addition, Jeri’s warm waters provide a great spot for wind- and kite-surfing.
Twenty years ago, the peaceful beach was relatively unknown to tourists. Today this area is part of an Environmental Protection Area (EPA), which brought the comforts of electricity while keeping the area’s seclusion intact. Daniela Sarto, who chose to spend her honeymoon in Jeri, says the relaxing beach amazes her because its natural beauty has been preserved. “I just enjoyed doing nothing,” she says about the tranquil village. “It’s hard to believe that after all the destruction we have caused on our little planet Earth, there is still a place like Jeri. This place is living proof of what nature is capable of producing.”
>> www.jericoacoara.com

Exploring castles on the coconut coast

Praia do Forte, (pictured left) or the “Fortress’s Beach,” owes its name to a castle-fortress that Garcia D’Avila built in the sixteenth century. The ruins of the castle, among the oldest in Brazil, are a perfect spot for those who want to learn more about Brazilian history and its conquistadores.
Besides featuring archaeology, this area also houses several projects and foundations that protect local biodiversity and historical sites. One of these is the Tamar Project, which aims to protect the sea turtles that nest in the shores of Praia do Forte. Paulo Bueno, who has been to Praia do Forte several times, says the Tamar Project “is considered one of the most advanced projects in the world when it comes to the preservation of sea turtles. There you can contemplate the turtles in large tanks of waters, and they amaze you by their size, colors, and variety. This is a land that still has many secrets and fascinating places to be discovered.”
Praia do Forte is surrounded by tall palm trees, which inspired the area’s nickname—“the coconut coast.”
>> www.wikitravel.org/en/Praia_do_Forte

Surfing with the whales

Praia do Rosa, which means “rosy beach,” is a hidden treasure in the state of Santa Catarina. Known for its big waves and surfing spots, this beach is perfect for those who want to visit the southern beaches and surf while avoiding the surfing crowds.
The small fishing village where the beach is located was discovered in the early ’70s by young hippies, who still live there and run the local businesses. The area has only two paved streets, and many of the beaches are accessible only by foot. Ox carts are still the main transportation service from May to June, when fishing is the key trade among natives.
What makes the beach so special are the whales that visit it from August to November to give birth. Every year, they become local celebrities by spraying up water and showing off their black tails and their adorable newborns. To avoid the destruction of these beloved creatures, the Brazilian government has created a project to protect and help its “little” friends reproduce safely in the area. The whales seem to appreciate the VIP treatment. They return each year to greet the amazed tourists.
>> www.gobrazil.about.com/od/brazilianbeachesislands/p/praiadorosa.htm

Seeing Life from a Jangada

Porto de Galinhas, which literally means “Port of Chickens,” used to serve as an illegal port for slaves, formerly referred to as “chickens.” Today, this beach of white sand has left its dark past behind to become a welcoming harbor for tourists from all over the world.

The beach’s proximity to the equator guarantees constant sunny weather and a refreshing breeze—a perfect combination for swimming and fishing. Porto de Galinhas’s white sand is always bathed by inviting, warm waves. The most famous feature of this beach is its natural pools: the coast is guarded by reefs that trap water and sea life of all kinds when the tide is low. The constantly changing sea life makes these pools ideal exploration spots for visitors.

Another highlight of this beach are the jangadas, traditional Brazilian fishing boats. Visitors can sail on these boats to explore the natural pools near the shore. According to Paula Vicentini Candia, who has spent many vacations in Porto de Galinhas, “Using a jangada to sail to the natural pools is wonderful. You can visit areas of the sea that are not too deep. You can dive and see fish swimming all around you. Everything is beautiful.”

Even though the beach attracts many visitors, the local village of Porto de Galinhas still remains small and inviting. In addition to being near the beach, the village has comfortable hotels and restaurants that feature the local cuisine. If you want a break from the beach, you can take advantage of the stores and historical buildings in the village.

Porto de Galinhas is a perfect place to experience small-town Brazil and the stunning natural beauty of Brazilian beaches.

Ipanema, one of Brazil’s most famous beaches, is in Rio de Janeiro. The city will host the Summer Olympics of 2016.

Ipanema became popular with Antonio Carlos Jobim’s song “The Girl from Ipanema” and the Brazilian rhythm of bossa nova with which he immortalized the beach. Though many years have gone by since the song was first composed, the magic of samba and Carioca poets is still present at Ipanema, one of Rio’s most popular beaches.

Because Rio de Janeiro is one of Latin America’s largest metropolises, Ipanema is surrounded by modern clubs, high-class restaurants, museums, and beautiful green hills. Ipanema is also fairly close to famous tourist spots such as the Christ the Redeemer statue, the Sugarloaf Mountain peak, and hiking trails in the native Atlantic forest.

Despite the summer heat, the water at Ipanema is always cool and refreshing. In addition to hosting several outdoor concerts throughout the year, this trendy shore also attracts athletes, who come for soccer, volleyball, and many other sports played in the warm sand. For sports aficionados, Rio de Janeiro will host the 2014 World Cup and the 2016 Olympic Games, both of which should bring much more attention to this charming city of samba.

For more, go to travel.nytimes.com.