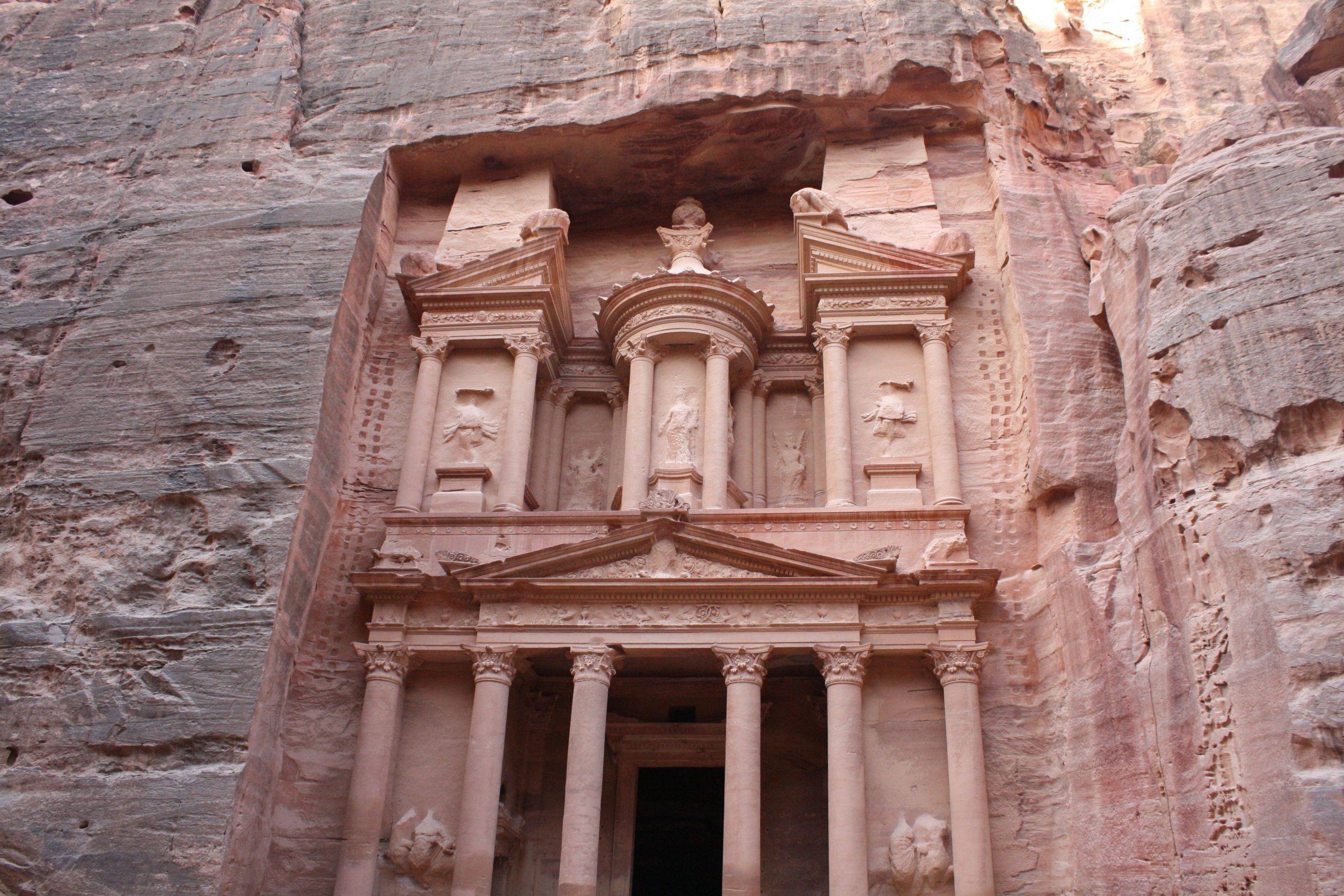 Deep in the Kingdom of Jordan lies Petra, a city whose name refers to the rock from whence it was chiseled. The Nabateans, ancient inhabitants of Jordan, carved this city from the sides of desert sandstone cliffs more than three thousand years ago—complete with water systems, waterfalls, and other beautiful and useful structures. During the rule of empires now ancient, Petra was known as a place of wealth and thriving trade.

The Treasury is the first grand site visitors will set their eyes upon as they make their way through Petra. Photo by Jordan Carroll

Although shifting world powers and trade routes led to the abandonment of Petra during the fourth century, you and other tourists today can still feel the splendor and majesty of this ancient marvel.

To enter Petra, you will first pass through a narrow gorge known as al-Siq (“The Shaft”). Steep sandstone walls tower above, periodically crowding in and narrowing the trail. Excitement builds as each twist and turn brings you closer to the ancient city. You will likely pause every so often and crane your head back to look up at the sliver of deep blue sky high above you. Luckily, the path is only about a mile long and easily traversed; before you know it, the path opens in front of you and you catch a glimpse of the first and most famous building in Petra: the Treasury.

If you’re familiar with Indiana Jones, you know exactly what the Treasury looks like, although you probably didn’t know what to call it. Countless tourists have taken advantage of the photo-op at this famous site, some of them even bringing their own Fedoras to wear. The building is open for you to climb inside, where you can admire the details of ancient handiwork—most of it is a remnant of the original carvings from over three thousand years ago.

The Treasury, famous as it may be, is merely the first building in Petra, marking the place where al-Siq opens up on the main street of Petra. While walking along this street, you will see caves and smaller private dwellings carved into the rock face alongside ancient tombs and other structures.

A Bedouin man sits in a market within Petra. Locals sell everything from jewelry to camel rides. Photo by Jordan Carroll

There are also local merchants from nearby towns who earn their livelihoods in Petra. Some are children, who eagerly approach you with boxes of rocks or small trinkets for purchase. Other merchants sit at stalls selling glass jars filled with colored sand, jewelry, and other mementos. Prices may be listed in multiple languages, but remember—you will pay considerably less if you can read Arabic.

The main road through Petra will take you toward one of the easiest and most common hikes, which leads up to a building known as the Monastery. This, like the Treasury, is one of the larger structures carved into the cliffs at Petra. For a break from walking or just for the story to tell, you can rent a donkey to carry you the 800 or 900 steps to the top, although some visitors have said that the donkey ride is more terrifying than just making the climb yourself. The path is more strenuous than al-Siq, but the view from the top overlooking the surrounding countryside is stunning. The giant Monastery is similar in detail and structure to the Treasury, and there are additional smaller caves and simpler buildings to investigate.

For the more adventurous, there are also steep climbing trails up the rock walls of Petra to sights that few others see. These trails wind up the cliff face for breathtaking views from above the Treasury. You can also find remnants of the ancient civilization that once thrived at Petra: Nabatean altars, an ancient cistern, and shards from long-broken pottery.

Even along these less-traveled paths, you will still find more of the modern locals with their merchandise, hoping to sell you some little trinket. One visitor was surprised to find an old, nearly blind woman selling jewelry at the top of a mountain.

Although the world has changed in the past three thousand years, you will discover that Petra is still a place of wonder, beauty, and thriving trade.