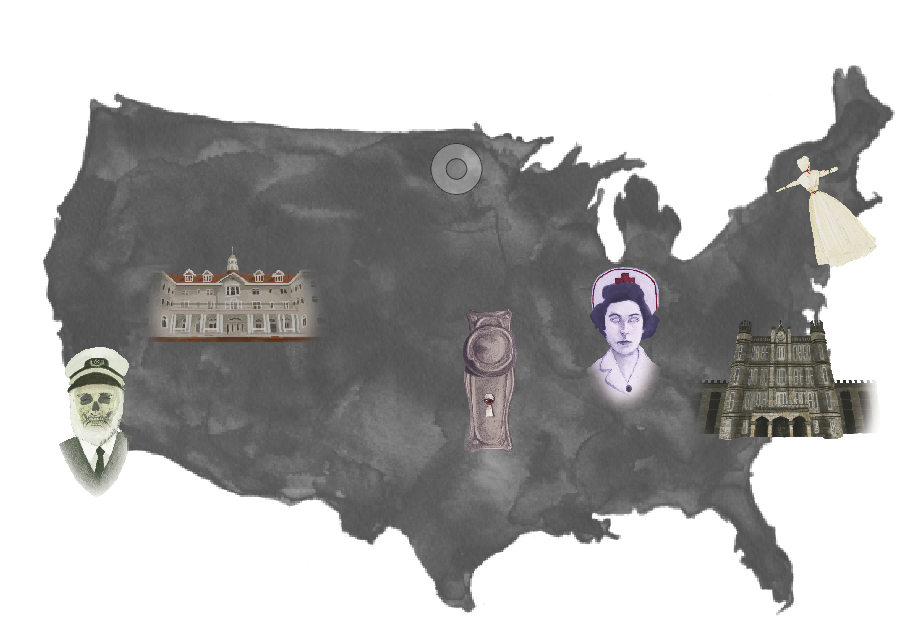 With horror movies like The Devil Inside (2012) and The Woman in Black (2012) coming out every year, Americans’ fascination with ghosts and haunting is readily apparent. Let’s face it—we’re either curious about the next life or we’re just addicted to the exhilaration of a fright attack. If you’re the kind of person who goes to all the new horror flicks hoping to jump five feet in the air, here are a few haunted spots to hit this fall. Each is known as one of the most haunted places in America.

The Queen Mary
Long Beach, California
Once a transport ship from World War II, the Queen Mary is now a restaurant, hotel, museum—and a dwelling place for a few of the dearly departed. Retired from active service at Long Beach, California, the Queen Mary is a hot spot if you’re wanting to see some ghosts. Beware, though: this is not the place to get a good night’s rest. Don’t be surprised if you are suddenly awakened in the middle of the night by a mysterious phone call with no one on the other end.
www.queenmary.com

Estes Park, Colorado
How’s this for a great vacation idea: wake up in your hotel, order room service, maybe spend your afternoon at the hotel spa, and then, later that evening, take a haunted tour of the very hotel you’re staying in. Ever since it was built in the early 1900s, the Stanley Hotel in Estes Park, Colorado, has been a favorite haunt—for the living and the dead. Whether it’s parties in the empty ballroom, piano music coming from the closed piano, or ghostly guests roaming the halls, the Stanley Hotel is sure to keep you on your toes.
www.stanleyhotel.com

Haunted Lemp Mansion
Saint Louis, Missouri
The Lemp family was among the richest families in America because of John Adam Lemp’s successful brewery company. After the mysterious death of one family member and the suicides of several others, the business failed and was auctioned off. Haunted by an illegitimate son who had been locked in the attic, as well as by other restless spirits of the Lemp family, the Lemp Mansion in St. Louis, Missouri, is a spot to check out if you’re in the mood for a good old-fashioned American haunting.
www.lempmansion.com

State Penitentiary
Moundsville, West Virginia
About five hours east of DC is a gothic-style penitentiary, first opened in 1875. It housed some of America’s worst criminals. This tour calls attention to ghost sightings and features former prisoners’ creations—such as beautiful murals and deadly weapons. You will also hear about the torture performed on prisoners and see the electric chair that was used to kill nine inmates. See if you can spot some of the ghosts of the inmates.
www.marshallcountytourism.com

Waverly Hills Sanatorium
Louisville, Kentucky
When many of the original patients entered Waverly Hills Sanatorium, they never left again. It used to be a hospital for tuberculosis patients; it’s now said to be one of the most severely haunted buildings in the southern United States. Some of the favorite ghosts are the old woman shrieking for help as she runs around in chains, the suicidal nurse walking the halls, and Mary—the little girl on the third floor.
www.therealwaverlyhills.com

Salem Ghost Tour
Salem, Massachusetts
Who among us does not equate Salem with witches? During the October Haunted Happenings of Salem, there are several tours that will take you through Salem in the dead of night (or the middle of the day) to locations reeking with paranormal activity. Not only are you promised ghost sightings on this tour, but you will also learn about the history of witchcraft in New England.
hauntedhappenings.org/tours