Bridging the Gap: Growing up As Transatlantic Citizens 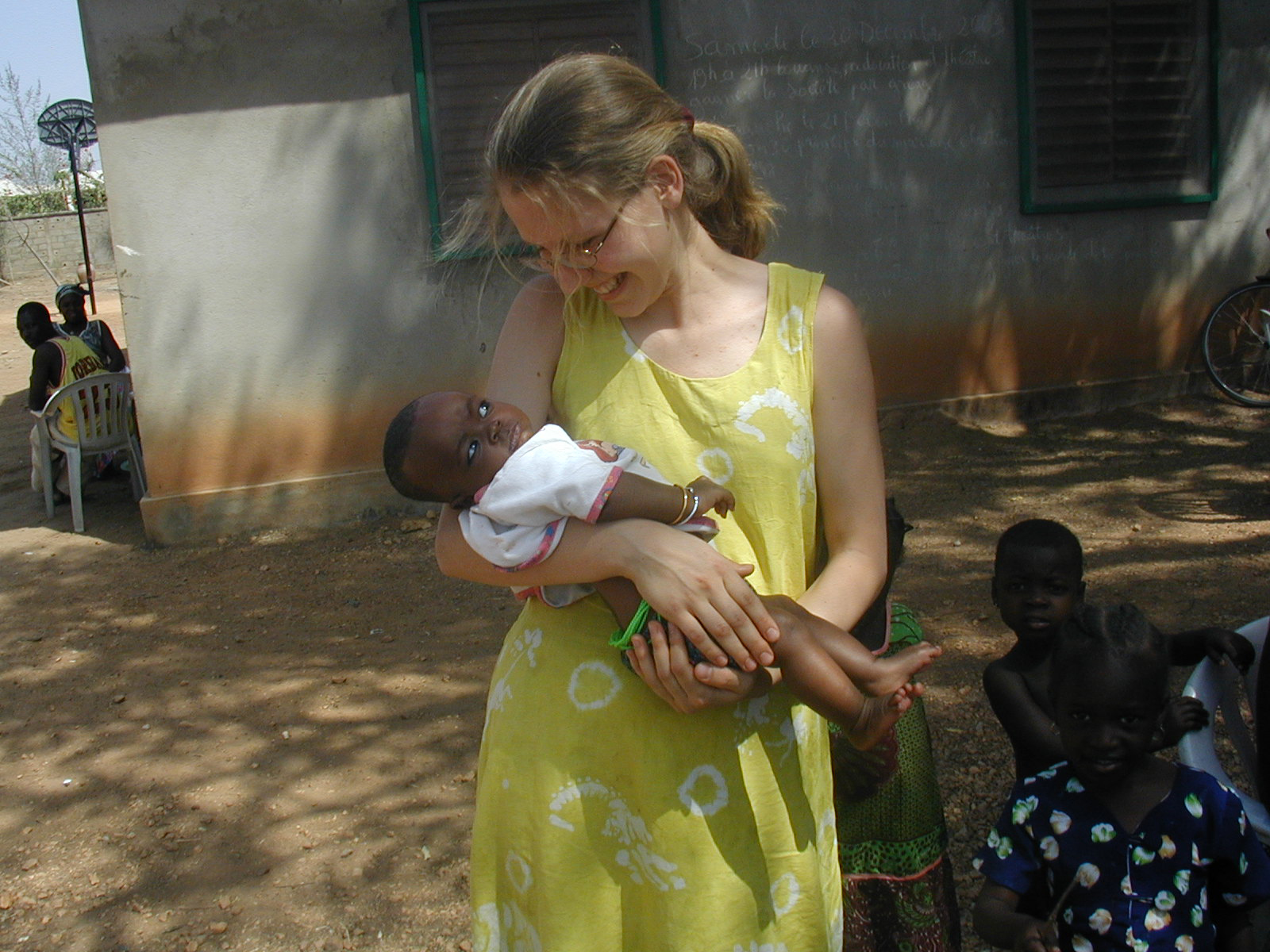 Angela Yarian holding a baby from the village (about year 2003)

Throughout most of their childhood, the Yarian sisters’ lives were divided between Togo and the United States. From 1995 to 2004, Rebekah (starting at age eight), her sister Angela (starting at age seven), their younger brother, Daniel, and their parents spent half of each year in a little country town outside of Sykesville, Maryland, and the other half of the year in Dapaong, Togo—a tiny city in a tiny country on the northwest coast of Africa.

I know what you’re thinking: is their father an ambassador . . . or in the military? Actually, their parents are part of a Christian missionary effort in Togo called the Ministry of Jesus, whose main goal is to teach people about Christianity and to train new leaders in the church.

This transatlantic experience gave the Yarians an appreciation for the sense of community that can be found across the globe—even in countries as dissimilar as Togo and the United States.

Rebekah is currently a university graduate and a fourth-grade teacher in inner-city Baltimore, Maryland. Her sister, Angela, is an artist living on the North Shore near Boston (see http://www.dogpond.org/art/postures-of-receiving-by-angela-yarian/.

Rebekah: Togo is diverse: there are different regions that are each unique. Togo is very community oriented, very family oriented. The landscape stands out to me. I love the savannah region. I love the sparse trees, landscape, and grass. There are a lot of birds. I’d go on lots of walks—hour-long walks with my monkey. Just wandering through the brush was the most peaceful experience ever.

Stowaway: I know your mom home-schooled you in Togo, but what did you do the rest of the day?

Angela: After we were done with school, we’d go see friends. It was hard to form friendships at first because of the difference in language and culture. However, the Togolese lifestyle is very communal, so once we formed friendships our friends would drop in all of the time and we would often go over to their houses to hang out. We would play games with them or help them make food. Life is lived at a slower pace there; most people walk everywhere and they spend a lot of time just hanging out, doing house work together and talking.

Rebekah: We had a lot of animals. I had a pet monkey named Yoda. And we played a lot with our neighborhood friends. They would come over and we would play town and set up a marketplace and pretend like we were in the market. We’d play cooking, we’d play families, and we’d play school. We’d have the hospital, and we’d sell candy at the hospital—those would be the pills—and I was always the school teacher.

Daniel, Angela, and I hung out a lot. We lived on the outskirts of town, and there were a lot of paths and roads. We rode our bikes a lot. It was a very good childhood. Sometimes I think, “I don’t want to have children in the US; it’s a lot more fun growing up overseas.”

Rebekah: I was too young to think it was weird. At first, I was the most resistant of the three of us to move to Togo because I didn’t want to leave my best friends in Maryland. But when we first went to Togo, I really fell in love with being there. Part of it was my monkey. I was a mess when we had to go back to the US that year; I didn’t want to leave Togo—it was my home. After a few years it became more normal, and I started to feel comfortable in both places. But the first few years, I was definitely more attached to Togo.

Stowaway: What are some of the things you liked best about living in Togo?

Angela: Togo’s people are extremely generous, welcoming, kind, and loving. The people there don’t really have a lot of money, but visitors to any village are always given a chicken. A chicken was a huge amount of wealth, and it was their way of honoring you. They’re very generous and sacrificing and loving in that way. It’s a hard life, but it’s a beautiful culture.

Rebekah: I like the culture of everybody just dropping by. You don’t ever get invited places normally; you just drop by. It’s a very hospitable culture. If somebody drops by, you have to offer them food and water. You have to hang out. Sometimes I got annoyed, but now, looking back, it’s what I miss most because we could never be alone. There was always somebody at our house. My parents got into a routine where my mom made some extra food so that if two or three extra people showed up, we could always have them stay for dinner.

Stowaway:Was there anything you didn’t like about growing up in Togo?

Angela: It bothered me that it was hard to fully integrate or know what was going on culturally because I didn’t have the freedom to just blend in. As one of the few foreign westerners in town, it was almost like being a celebrity or something; you’d walk by and everyone would wave to you but people did not always accept you as just a regular person.

Stowaway: Do you ever miss Togo?

Rebekah: I don’t know. I think I’ve always been a homebody. I like having a community to be a part of; I like being recognized. I want to put down roots. I want to travel, but I don’t want my life to be half and half again.

At the same time, the dual life is a huge part of who I am, and Togo’s always going to be home. I want to be able to go back home to Togo. I feel like a lot of third-culture kids—kids who have grown up overseas—grew up in another country and that’s it, and they never go back. To me, that would be really hard; it would be like cutting off a part of me. I want to be able to go back to my hometown.

The sense of community from the two distinct cultures has left a mark on the Yarian family. They will forever be transatlantic citizens with a unique perspective on the world.