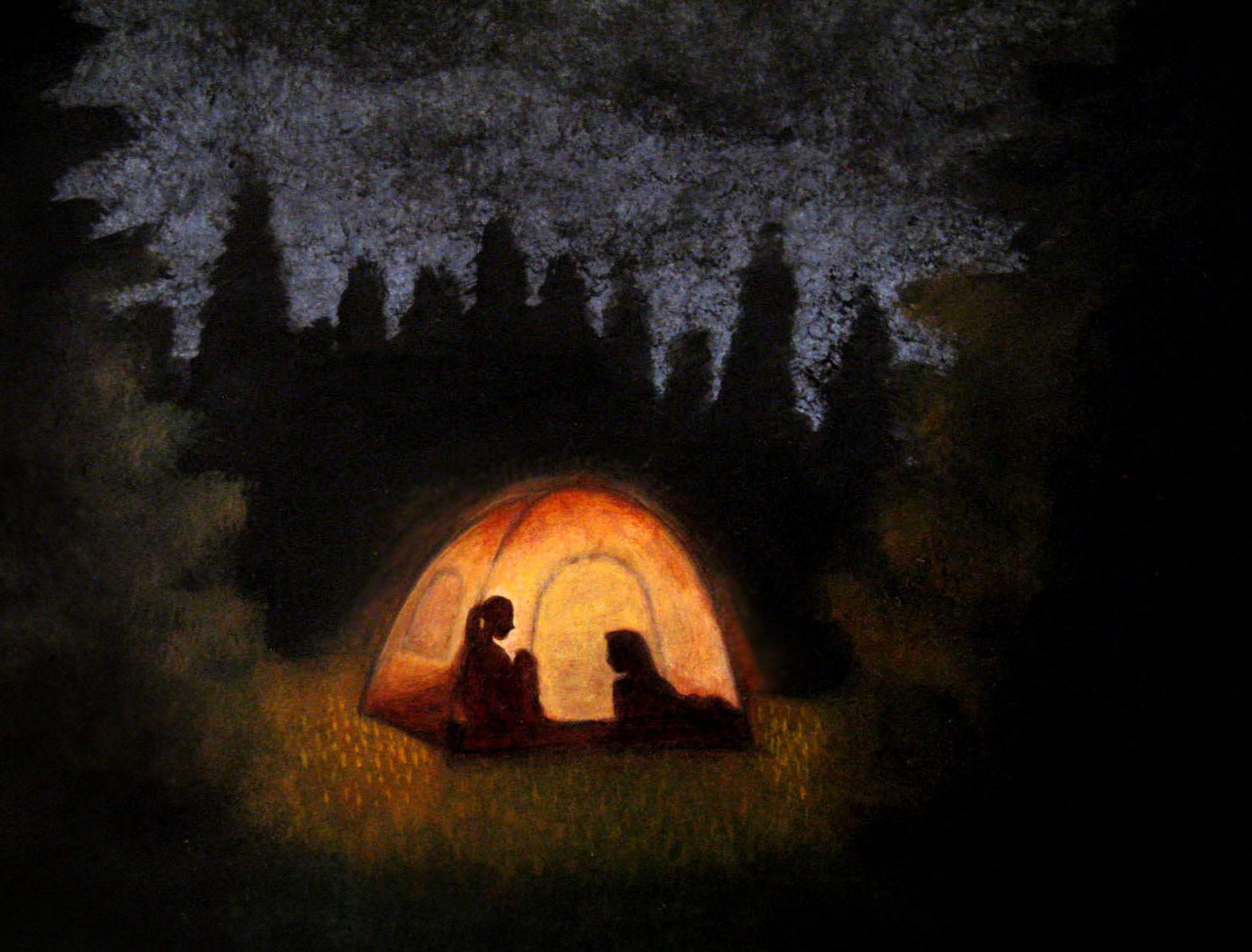 I laughed. A lot.

“This is not funny!” My mom scowled at our pole-less tent.

“Aw, come on—it is funny. I mean this would happen to us.”

This referred to our failure to bring tent poles on the second camping trip in a row. Obviously irritated, my mom spread her sleeping bag across a patch of ground that didn’t have too many rocks, resigning herself to the bag’s interior.

I was not very eager to experiment with sleeping under the stars during the New England summer, which was on the verge of a rainstorm and was full of mosquitoes. But there was no other option.

Morning came and, although the outside of my sleeping bag was covered with dew and tree sap, I had survived. We threw the sleeping bags into the car and drove to town for the day, planning to return to the same campsite that we had reserved for another night. As we drove away, I noticed that the site looked like no one had been there—and that there was no indication that we would be returning for our second night.

Certainly, that’s the way it must have looked to the park rangers. When we returned to our site that night, we found a young couple, their dog, their tent, and their table full of food.

The park ranger explained that he didn’t think anyone had shown up at that spot because we hadn’t left anything there during the day. He offered to make the couple move to another spot. But after seeing all the effort they had put into making their campsite all campsite-y, I told the accidental interlopers that we would park our car elsewhere—we didn’t have a tent anyway. As we finished moving to the new site, our new neighbor walked over with something in his hands.

“You guys said you didn’t have a tent? We have a spare.” He handed us a small tent with poles. “Thanks for giving us your spot.”

That night it rained pretty hard. As I looked up at the tent ceiling, listening to the rain pounding, I realized that this is how life is supposed to work. Sometimes you just need to park your car somewhere else. And sometimes that means you’ll be protected from the rain.

A few years ago, my husband and I went on a month-long trip to Europe. After spending a few days in Florence, we wanted to enjoy our last evening in Italy at a fancy restaurant, eating a truly great pizza. We found a nice place on a secluded street near the outskirts of the city.

Soon after we arrived, I left our table to find the restroom and was surprised to see something that looked like a camera in the upper corner of the ladies’ room. I tried not to imagine the waiters watching me from the kitchen. After I had nervously done my business, the lights in the restroom went out, and I found myself in complete darkness. Part of me was fearful, and part of me was relieved that the waiters on the other side of the camera couldn’t watch me any longer. I fumbled at the wall to find the light switch and pulled the closest thing to my hand: a long cord hanging from the ceiling.

As soon as I pulled the cord, a deafening sound broke the silence of my darkness, and I realized that I had set off an alarm throughout the entire restaurant! I could barely make out the voice of our waiter yelling in broken English from the other side of the door: “Push ze white botton! Push ze white botton!” In the darkness, fully exposed and with an alarm ringing in my ears, I hit every button in the bathroom until I finally found the one that shut off the alarm. As I made my way back to our table, everyone was staring at me with very amused looks on their faces.

A few minutes later, my husband left to use the restroom. When he returned, he whispered to me, “I used the ladies’ room just to check it out. That wasn’t a camera in the corner; it was a motion sensor. The lights are on a timer—and if they go out, you can wave your arm to turn them back on again.”

Well, anyone can do it the easy way.

A few weeks after moving to Germany, I was invited to join a bunch of other college students for a game night. Though I was pleased to be making new friends, it was taxing to listen to so much German that I couldn’t understand yet, and the game they decided to play didn’t make things any easier.

In this game, the names of famous people are written on Post-it Notes. Then everyone exchanges the notes and attaches them on their foreheads without reading the names. Each person then has to ask questions in order to discover which famous person’s name is displayed on the Post-it Note on his or her forehead.

Not only did I have trouble formulating questions in German, but I was also the last one who still hadn’t figured out my famous person. “It’s Angela Merkel!” the others said when they saw I could go no further.

Boy, did I feel dumb. Note to self: next time you move to a new country, find out who the president is.