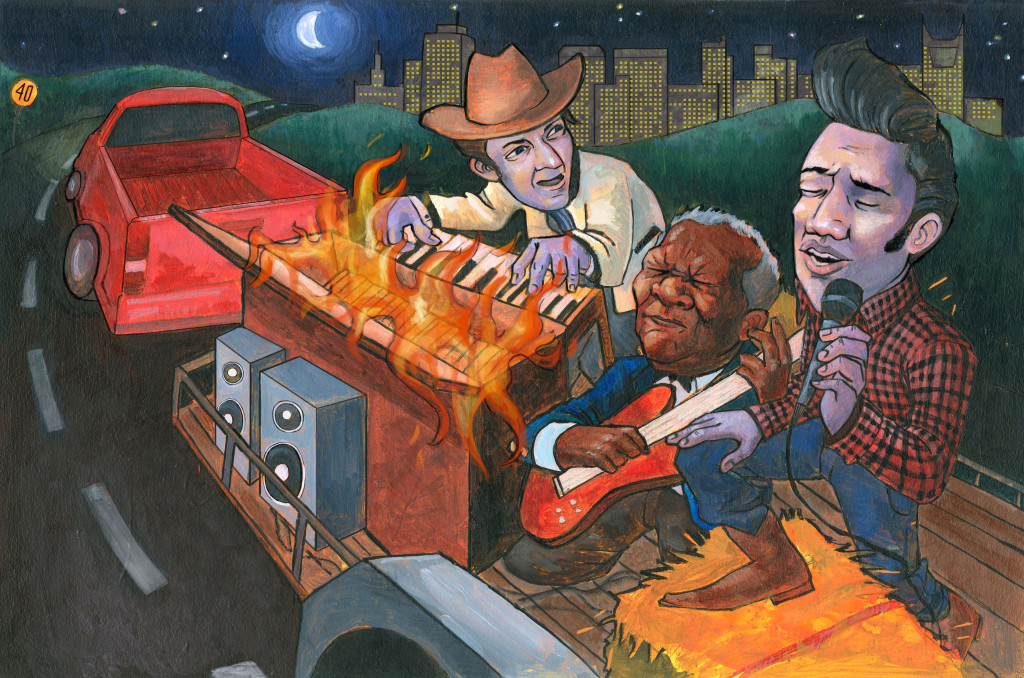 In autumn, the Tennessee hills blaze with color. Red, orange, and yellow leaves brighten the landscape. The air remains warm but is cooled by a pleasant breeze. It is an enchanting place, buzzing with creative energy. There is little wonder why this region is famous for attracting musicians.

Think about it: so many musical genres have roots in Tennessee—blues, gospel, country, and rock and roll. Between Memphis and Nashville you can find memorials celebrating B. B. King, the Reverend Al Green, Garth Brooks, Johnny Cash, Jerry Lee Lewis, and the King himself—Elvis Presley.

Locals relish their rich musical history. This pride is demonstrated by a state senate bill passed in 1999 that officially designated the region of Interstate 40 between Memphis and Nashville as the “Music Highway.” Today, there are signs along the road celebrating this title and directing travelers to musical landmarks such as murals, monuments, and museums. Just a sampling of sites includes a rich variety of destinations.

Many artists, including Jerry Lee Lewis, B. B. King, and Elvis Presley, are celebrated along the Music Highway. Illustration by Benjamin Pack

The world’s only museum of soul music, the Stax Museum contains more than two thousand relics dedicated to the pioneers of the genre. There are also interactive exhibits, films, and galleries designed to give the visitor a true taste of soul. Listen to clips of songs, examine old costumes, and marvel at the humble beginnings of this uniquely American genre.

Elvis’s mansion isn’t the only thing to see at Graceland, the home of the King of Rock & Roll, but it is the most popular attraction. Get a glimpse into the life of one of America’s musical legends as you move from one distinctively decorated room to the next. Then cross the street to view the King’s cars and planes in separate exhibits. Even if you aren’t a huge Elvis fan, no visit to Memphis is complete without a trip to Graceland.

Further east on the Music Highway, you will find a monument to the music of the early 1950s at the Rockabilly Hall of Fame. The term rockabilly was coined to represent the musical styling of artists such as Bill Haley, Elvis Presley, and Buddy Holly, all of whom mixed early rock and roll with hillbilly music. Watch films and listen to audiotapes that allow the artists to tell you their stories, and be sure to check out what shows they’ll have going on when you’re in town.

For a different experience, visit the outdoor memorial to country legend Patsy Cline. Although Cline was born in Virginia, the monument stands at the site of the plane crash that killed her, Cowboy Copas, Hawkshaw Hawkins, and their pilot, Randy Hughes. The park includes a small stone marker, as well as a board with pictures of Cline.

Of all the historical music sites in Nashville, one of the most famous is the Country Music Hall of Fame, a definite must-see for country music fans. This legendary site celebrates great country musicians from every era. Take a trip through time as you examine old costumes worn by country music’s most famous performers, stop at listening stations that play key songs in the evolution of country music, and marvel at artifacts from guitars to sports cars. You can even find studios from old radio stations and playbills from country music concerts. Be sure to check the website to see which special exhibits will be displayed when you’re in town and to purchase tickets in advance for the cheapest rates.

Before your trip to Tennessee, visit www.tnmusichighway.com.