WWOOFing: Dig for Your Dinner 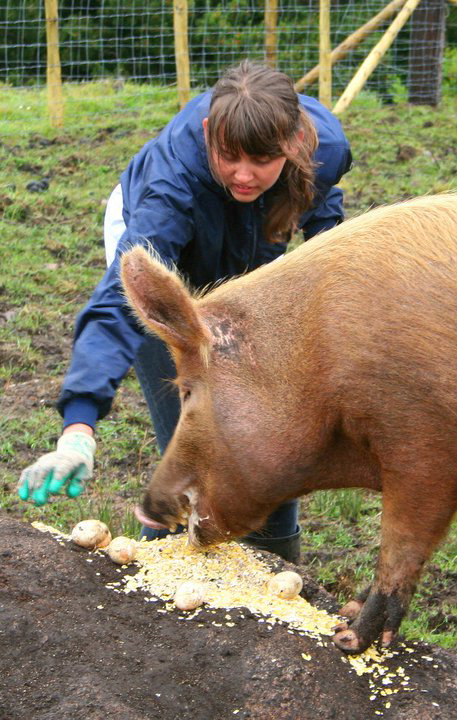 Feeding farm animals was a daily duty for Alexis Hiatt, a WWOOF volunteer in Ireland. Photo by Kristjana Green

Dirt was never on the menu for Kristjana Green and Alexis Hiatt as they planned their summer excursions. But though the dirt wasn’t completely washed out of their well-earned, self-produced meals, they didn’t seem to mind.

It’s called WWOOFing—joining a network of organic farms around the world for the summer. WWOOF, World Wide Opportunities on Organic Farms, is an organization that links people together who want to live or learn to live organic lifestyles. Green and Hiatt chose to spend two weeks in Ireland. Armed with only the basic knowledge they gleaned off the WWOOF website and Google, they went to WWOOF on an Irish organic farm.

The two girls cared for pigs (in this case, a special breed found only in Ireland), ducks, cows, goats, horses, and other traditional farm animals. Feeding and general care was on the daily schedule—a very messy schedule where pigs are concerned.

One particularly successful experience for the girls was planting the traditional Irish crops. Hiatt proudly declares that they planted a whole potato field. “It was a small potato field,” she says. “But we did it on our own.” About five rows long, the field took the two of them about three hours to finish. They teamed up and took turns, one girl breaking up the soil with a shovel and the other following, burying the potatoes.

Potatoes, like everything else they harvested, formed their future meals—and working to produce the food definitely made eating it a different experience. At the farm, Green says, “You know exactly where everything you eat came from. A couple times we’d be eating our salad and there would be a dirt clod.” It doesn’t get more natural than that.

Everything was homemade and organic—the pork, onions, tomatoes, lettuce, eggs, beef, potatoes, bread, cheese, and honey. They now realize that their diets on the farm were, by far, the healthiest they ate during any other part of their vacation.

Organic potato fields, like this one in Ireland, are planted and harvested straight to the dinner table. Photo by Kristjana Green

They not only ate healthier when WWOOFing but also learned more about the organic lifestyle that accompanies the diet. Green says that the lifestyle of the people who live organically is quite different from what they were used to. They experienced firsthand the passion of people who live organically. Their host felt strongly about eating right and even showed them documentaries about processed food. As Hiatt comments, for their host, organic farming “was his passion; he wanted to spread what he had.”

Besides learning to live organically, the girls experienced another culture in a unique and very personal way through WWOOFing. With their host, they bonded over the good, healthy dinners of potatoes, pork, and vegetables. Then in the evenings, Green and Hiatt spent time with locals by visiting the pub scene. Living a simple lifestyle, they experienced a simpler and healthier way of life that they try to continue now in their post-WWOOF lives.

best parts about the WWOOF experience is how affordable it is. There are no hostel expenses and no eating at restaurants or cafés morning, noon, and night. WWOOFers get free room and board for working on the farm. For tourists, room and board are some of the most costly parts of traveling.

Green and Hiatt began their WWOOF adventure with only basic information off Google. They both admit that, despite their lack of research, they were lucky in the experience they got. Here are a few tips they have for potential WWOOFers:

1. Know what you’re getting into before you go. Email the people you’ll be working with to know exactly how long you’ll be working each day and what they expect of you.
2. Go with someone you are close to. You’ll spend a lot of time with the people you’re with, so going with a casual acquaintance could be awkward.
3. Know about the country you’re going to. You don’t want to embarrass yourself by not knowing the history of the country when you’re talking with the locals, especially if it’s a people who are proud of their heritage.

WWOOFing is a whole different way to travel. As Green and Hiatt learned, a little dirt won’t kill you. But getting dirty in the real life of a community can give experiences, knowledge, and perspective in a way that can’t be gained from any other form of travel.