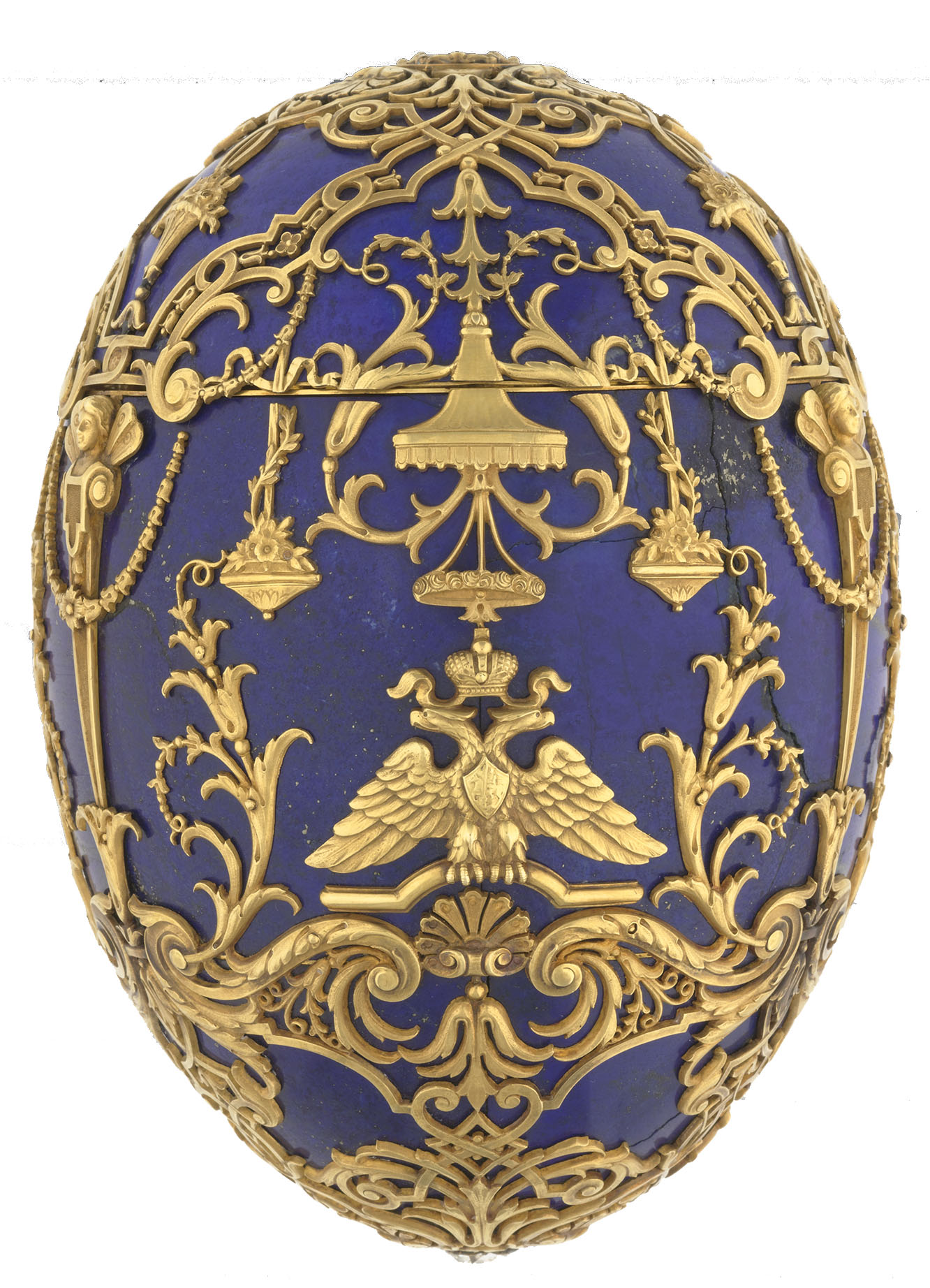 Created in 1912, the Czarevich Egg was created for Empress Alexandra Feodorovna as a tribute to her son, Alexei. Photography courtesy of Virginia Museum of Fine Arts.

On Easter morning, you are probably used to seeing a wicker basket filled with eggs—perhaps dyed chicken eggs, chocolate eggs, or colorful plastic eggs filled with a variety of candy treats. But what would you think if the eggs hadn’t been laid by a chicken or weren’t made of plastic or sugar?

What if each egg were a magnificent work of art or an exquisite piece of jewelry? What if it could be opened up to display a ruby pendant or a jewel-encrusted picture frame? These kinds of ideas are what started Peter Carl Fabergé’s 33-year career of creating Imperial Easter eggs for the czars of Russia.

Made in 1896 for Empress Alexandra Feodorovna, the Rock Crystal Egg displays paintings of various places that were important to the Empress. Photography courtesy of Virginia Museum of Fine Arts.

Fabergé was a purveyor to the Court when Czar Alexander III commissioned the first jeweled egg for his wife, Empress Maria Feodorovna, in 1885. A skilled designer, Fabergé recreated the recognizable egg shape out of precious metal and jewels.

Fabergé’s first two egg designs were dictated by certain requirements, but by 1887, he was free to use his own ideas. His designs became much more intricate and elaborate. Each egg displays different colors, patterns, designs, and jewels. “Their value lies in the genius and great craftsmanship of Fabergé,” says Dr. Géza von Habsburg, an internationally renowned expert on Fabergé’s work. “Each one was completely different from the other.”

Dr. von Habsburg’s work with Fabergé’s fabulous eggs and other jewels began more than 40 years ago, after he was asked to sell the contents of a safe owned by a deceased former French ambassador to Russia. Upon cracking open the safe, he realized it was full of Fabergé’s jeweled creations. Dr. von Habsburg explains that the eggs are extraordinary works of art. “Each egg took up to two years to make, and each reflects the genius of Fabergé in its incredibly brilliant invention and execution.”

Presented to Empress Maria in 1898, the Pelican Egg uses a folding screen to reveal eight miniatures relating to the Empress’s charity. Photography courtesy of Virginia Museum of Fine Arts.

A little-known fact about Fabergé eggs is that they also come in different sizes. Fabergé created thousands of miniature eggs for the nobility of Russia to give as gifts during Eastertide. Small enough to be worn as jewelry, each is completely unique.

Fabergé created 50 known large Imperial Easter eggs before the Russian Revolution. Thirteen of these eggs are currently in the United States. They can be found in private collections such as the Matilda Geddings Gray Foundation and in museums in Washington, DC; Baltimore, Maryland; and Cleveland, Ohio. The largest collection resides at the Virginia Museum of Fine Arts in Richmond, Virginia, which displays five of the eggs in its permanent collection.

This Easter, along with enjoying your traditional Easter eggs, give yourself a real treat—go see some of the exquisite eggs created by Fabergé.