Food Trucks: A Taste for Travel 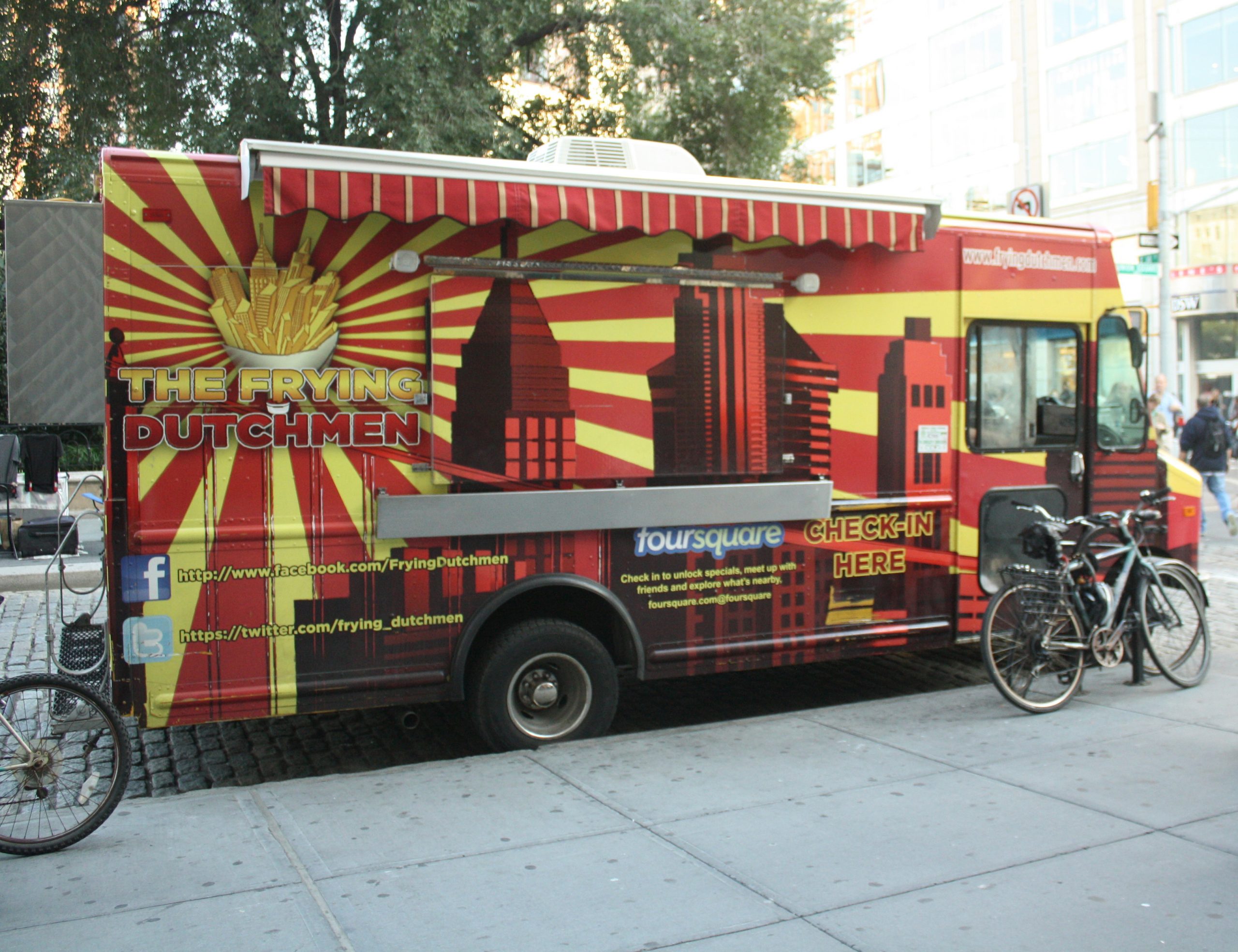 Horns honk and sirens wail. Men and women swiftly shuffle down the sidewalk. Without warning, the smells of pollution or police-horse droppings waft away, and the city now smells of sautéed vegetables, melted Gouda cheese, or grilled barbeque beef.

The aroma is like a homing beacon, demanding attention. Scanning the buildings for a café or restaurant is fruitless. However, a slight glance in another direction solves the mystery—the divine aroma is coming from a gourmet food truck.

Although the food truck concept dates as far back as the 1860s, the food offered on today’s 14-ton, moveable restaurant is nothing like the pork and beans of its chuck wagon predecessor. Gourmet food trucks have been steadily growing in popularity since 2010. During the lunch and dinner hours, there can be anywhere from 60 to 100 food trucks in Los Angeles, New York City, and Washington, DC—the top three food truck cities in the United States.

Whether you are traveling or working in the city, time is of the essence. But living life in the fast lane no longer requires the time-pressed individual to sacrifice taste.

Gourmet food trucks find a way to capture some of the richest flavors in new combinations that make your taste buds rise and shout for joy. Oh, and these dynamite delicacies are created in a kitchen that’s about the size of a taxicab. Impressed?

The most successful food trucks have found a niche market and have capitalized on it. The food available on four wheels is diverse, including dishes like grown-up grilled cheese, meat-driven Korean food, pulled pork-centered BBQ, super soups, and golden fries—yes, there is a food truck that sells just fries with condiments (Frying Dutchman).

“You get tired of the restaurants around you,” says Christine Sailer, as she waits for her Spicy Buffalo Chicken sandwich on 47th and Park Avenue. “The food trucks are convenient and bring variety to the area.”

But how do businesses that change locations, often multiple times a day, tell their fans where to find them? Two words: social media. In addition to their websites, food trucks rely on Twitter and Facebook to get the word out about where they’ll be setting up shop for a limited time.

“We like to strategize our lunch based on what food trucks are in the area,” says Amelia Meadows, a Manhattan resident, waiting for her smoked Gouda on wheat with BBQ pulled pork and onions. “I have an alert on my phone to remind me to check the food truck updates.”

Photo By Jordan Carroll. Get a cup of joe to go at NYC Love Street Coffee.

These social media outlets also allow businesses to communicate changes that come about due to bumps in the road—both literally and figuratively. Whether a truck experiences mechanical problems, is forced to relocate, is involved in a fender-bender, or simply runs out of food, social media keeps customers up-to-date. Kogi Grill, in Los Angeles, averages 10 tweets a day on its Twitter account, @kogibbq. One tweet even acted as a lifeline for a Kogi truck named Roja, when it had mechanical difficulties:

“**ROJA HATH FALLEN AND HE CAN’T GET UP** Can someone heLp us jumpstart? WiLL pay in FOOD! @4400 Riverside in Burbank.”
In addition to social media, food trucks use unique truck designs to establish brand recognition and attract customers. The Sweetery’s truck (Chopper) in NYC is reminiscent of poetry fridge magnets on overdrive. The turquoise truck, which offers baked goods, is covered with descriptive adjectives such as “heavenly,” “scrumptious,” and “delectable.” Some trucks have an animal theme, such as Korilla BBQ’s vivid tiger pattern—or Gorilla Cheese, NYC’s giant King Kong–like mascot. These scintillating exteriors are a key component to what makes food trucks hip.
“To eat off of street vendors is the ‘in’ thing to do—it’s the romanticization of urban dining,” says Eddie Song, co-founder of Korilla BBQ. “Many can’t afford to spend $70 at an eat-in restaurant, but with food trucks they can still eat a great meal for $15.”

Food trucks aren’t only a great deal for the customers. There are benefits for the owners as well. With a mobile restaurant, food truck owners avoid pricey overhead costs, like rent and utilities. Having a mobile business is also great for customer outreach. Food trucks can have a broader following because they go to people all over the city.

But operating a business out of a truck comes with its own set of challenges and is not for the faint of heart. On average, food trucks are 26 feet long, with a 14- by 8-foot kitchen area, totaling 70 to 85 square feet (about the size of a Toyota Corolla). With upwards of four people working in the kitchen at a time, personal space doesn’t exist on a food truck.

“Basically, you’re in a steel cage with someone one foot away from you all day,” says Song. “It’s really tight, so you better get along.”

Despite the cramped quarters that food truck workers face, they feel rewarded by providing others with delicious food.
“Even in the beginning, when we were pulling 20-hour days, I felt fulfilled because I was giving people satisfaction through our food,” Song says. “If I didn’t have that, I wouldn’t be here.”

It didn’t take long for Yosef Tiwary to love his work as a food trucker at Gorilla Cheese NYC. After only three months of working in the “steel cage” kitchen, he says with a smile, “I love serving the people of New York. They are the best.”

The relationship between food truck workers and customers truly is mutually beneficial. It’s clear that although the trucks move often, the gourmet food truck business is here to stay.

So stop walking and start eating the delicious delicacies of a gourmet food truck before it drives away. “It’s like the phantom toll booth,” declares Meadows. “You have to take advantage of them when they are here, because you don’t know when they’ll be back.”