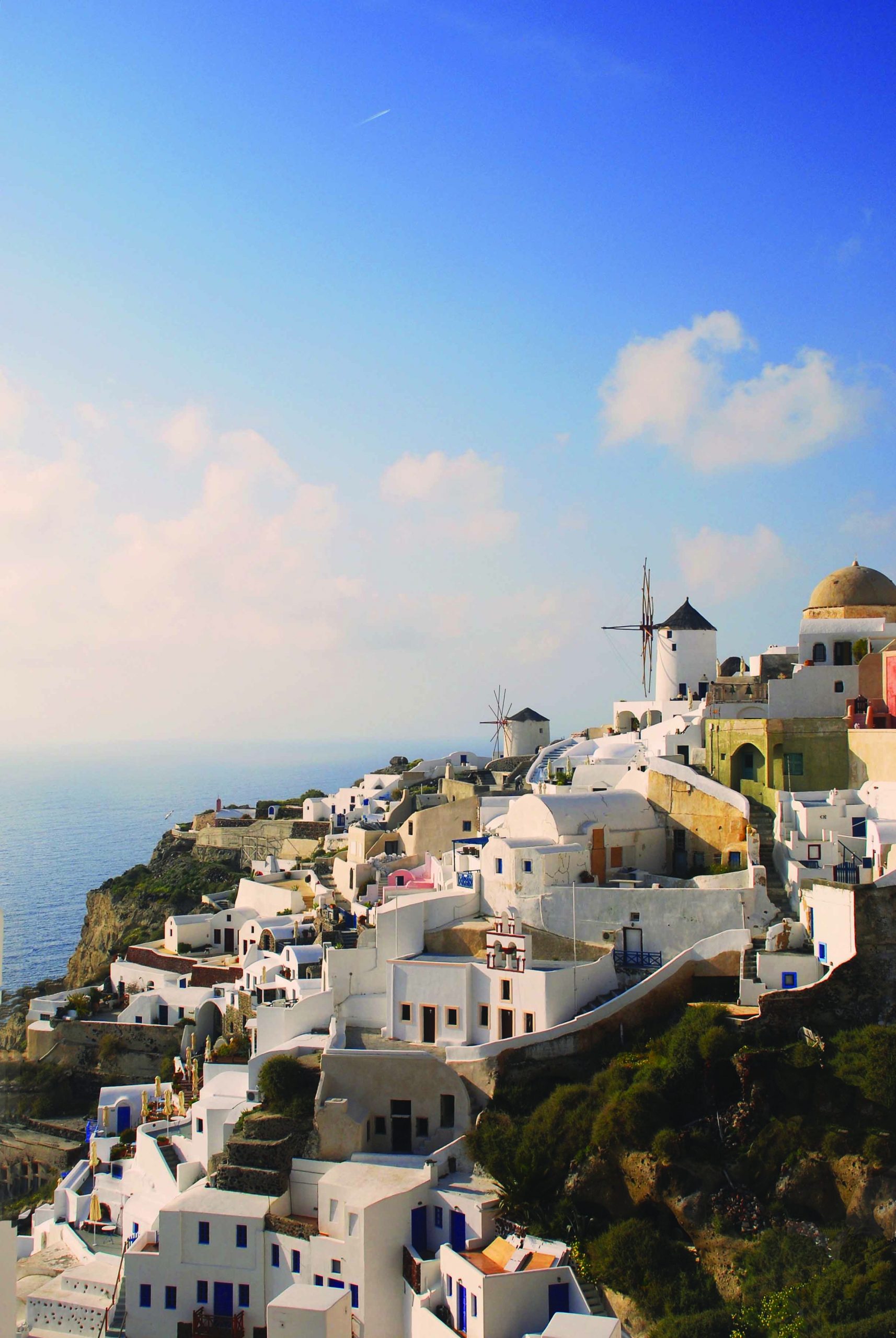 The village of Santorini lies perched on a steep hillside. Photography courtesy of Denise Jones

The deep blue crystal-clear water of the Aegean may be a sapphire itself, but it boasts other timeless gems—the islands of Mykonos and Santorini, which offer much more than a simple tourist vacation. Fall asleep to the sound of dancing grasses and braying donkeys, the lapping of water, and a distant wind chime—and fall in love with Greece.

Here the locals paint white between each cobblestone on the main roads—roads traveled only by humans, donkeys, and bicycles—so even just walking down the street feels unique. The interweaving of houses, restaurants, and shops creates a charming maze of white buildings, accented with shutters, doors, and balconies of yellow, blue, red, and green. A cook in a family-owned restaurant serves fried goat cheese, while a maid in the hotel upstairs hangs sheets on the line and a local woman next door waters her flowers. Any hole-in-the-wall restaurant will satiate your deepest and most exotic food desires, and the baklava will never be topped elsewhere in the world. The fact that these things have been happening in the same place and in the same way for centuries is rejuvenating for the twenty-first century traveler accustomed to a fast-paced life.

Along the waterfront, colorful fishing boats cram against each other, some going out to sea, others coming back with a small catch to sell to a local restaurant. Old fishermen, dressed in black with smiles larger than their faces, greet travelers, promote restaurants, and make jokes in broken English. Tourist or not, all are friends and family to this hospitable community.

In Mykonos, centuries-old windmills dot the rocky landscape, along with red-domed family churches, bright bell towers, and shepherds and sheep. These charming churches not only maintain the Mediterranean village feel, but also are a breath of fresh air—a charming, homey alternative to Gothic Era cathedrals found elsewhere. Stone benches along the paths invite travelers to slow down and breathe in the timeless world.

Santorini was built on a jagged cliff of a dormant volcano that lost two-thirds of its mass to an ancient eruption. Consequently, many ruins are underwater—possibly even the legendary ruins of Atlantis, locals boast. The island is crescent-moon shaped, and one end of the island is visible from the other, along with red, black, and white sand beaches and cliffs between. The dramatic terrain is filled with wild flowers in the spring and the homey ambiance of timeless people and whitewashed buildings year-round—but with a more majestic spice.

Church bells ring over the crescent-moon-shaped island of Santorini.

No place in Greece embodies a greater feeling of rich yet simple wholeness than Mykonos and Santorini. The charming stillness of these two islands awaits.

Exchange rates can be a beast, but there are larger problems for the euro. Countries nearing bankruptcy have government bonds that are deemed almost worthless in their country. Other economically stable countries that are also on the euro have to step in and give the currency and bonds stability and worth. Because these countries share currency, if one country goes bankrupt, the euro would become weaker and could collapse. Economically strong countries face a dilemma: spend huge amounts of money bailing out other nations or lose large amounts of money when the euro loses value.