Brent Fluckiger is Living Life on the Edge . . . of a Canvas 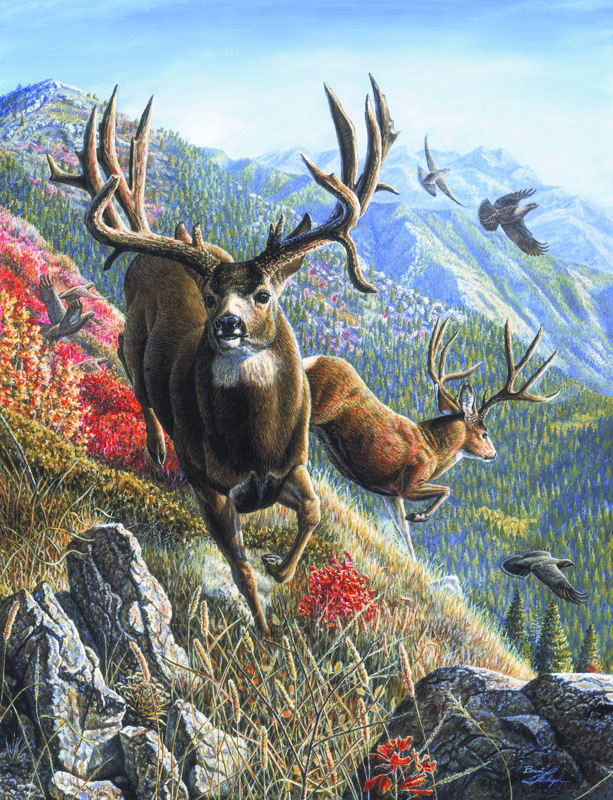 Nothing Here. The bird, an Asian Paradise Flycatcher, is meant to distract the viewer from the real threat. A large beetle is also hiding on the branches. Art by Brent Fluckiger

When people think of wildlife painters, they may imagine someone hunched over a canvas in a peaceful forest, quietly capturing the tranquil beauty of nature. While Brent Fluckiger has spent some time painting in the outdoors—and painting over mosquitoes that get stuck in his wet paint—the majority of his 36 years as a painter and taxidermist have been anything but peaceful. Fluckiger’s career has been filled with everything from near-death encounters with Kodiak bears to 1,000-foot cliffs to strong currents off the shore of Alaska, all in the pursuit of art. But his greatest challenge has been to do what he loves while still being able to provide for his family.We caught up with this active artist and were able to ask him a few questions about his life, his love, and the lessons learned from his nearly four decades of experience.

Why did you become a wildlife painter and taxidermist?

Because I don’t like steady paychecks, reliable income, decent income—you know, I like the adventure of going without. You should try it sometime [laughs]. In all reality, I did this because I have a natural gift: the ability to see what something looks like and repeat it.

What are some memorable adventures from your career?

I was hiking alone in the tundra about five miles outside of Cold Bay, Alaska. I was well over six hundred miles from Anchorage and just about as in the middle of nowhere as you can be, when I saw something brown along the foothills a few hundred yards above me. At first I thought they were cattle. There were three of them, but they were moving fast. Then it hit me: bears.

I watched them for some time. I got more and more concerned as they kept coming closer, and the closer they got, the faster they moved. I headed for the beach with the thought of going into the water. Not a workable idea—the water would immobilize me in minutes, and these bears don’t mind water at all. I thought of retracing my steps all the way back to my vehicle and the road, but more than an hour away, across the boggy tundra in hip waders? No.

They kept coming closer. They were now moving at a slow run and I could see their rubbery noses far more clearly than I wanted to.

At the last possible minute, the bears, who would stop and sniff the wind every few seconds, suddenly made a drastic right turn and started to run away from me. A couple minutes of watching them trot across the tundra, and they vanished into the foothills.

What advice do you have for aspiring artists?

What do you do if you have an obvious talent? Do you throw it away for security? What if you turn it over again and again and think your way through it hundreds of times, and all you come up with is, this will be hard, but I have to heed my heart and my soul?

Several times I have given up, and several times somebody came out of nowhere at the last minute and kept me going by buying some art. One afternoon I bumped into a complete stranger in a store. I told him what I did and showed him a couple photos. He followed me to my home to look at the paintings I had on hand, and bought $20,000 worth of art in 10 minutes.

​Looking back, I’m astounded at the opportunities that have fallen into my lap out of nowhere. Things have started to turn the corner in the last decade. I now rub shoulders with famous artists and clients, and the struggles to survive financially are fading away. You don’t do this stuff in a month, or a season, or a year. You do it in a lifetime. It changes who you are. You’d better have conviction.