An American in Florence 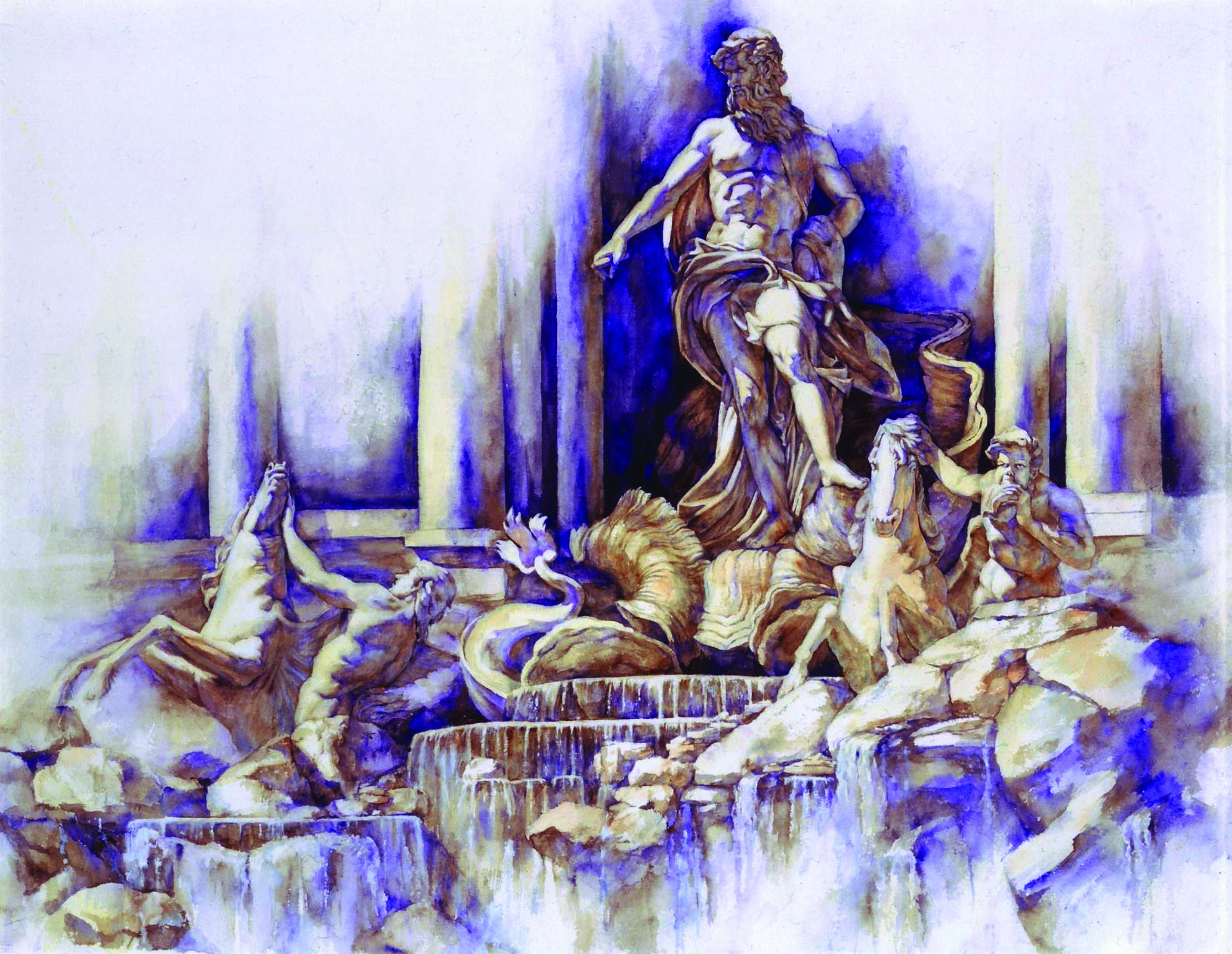 The Trevi, one of the most famous baroque fountains in Rome and home to the oldest Roman aqueduct. Art by Denise Jones

In order to get accepted as an undergraduate into the Accademia di Belle Arti in Florence, Italy, Denise Jones needed $12,000 in cash, fluent Italian, and an exceptional score on a grueling three-part exam. Like most college students, she was broke when she applied. Thanks to an $11,000 mural commission for the public library in Agoura Hills, California, she pulled the cash together in less than three months.

But she had only one hastily planned semester of Italian when she shipped over to Florence. “I got over there, and I couldn’t remember how to say ‘thank you,’” Denise says. “Gracias, gracias, gracias. It took me two weeks to figure out I was speaking Spanish, not Italian.” She never did master the grammatical passato remoto. But her Italian must have been passable because her entrance exam won her two years’ acceptance to one of the most prestigious art academies in Europe.

The Accademia di Belle Arti is the modern branch of the first drawing academy in Europe, the Accademia delle Arti del Disegno. Here Renaissance geniuses like Michelangelo Buonarotti and Sandro Botticelli created some of the most famous works in history.

The legacy of these art history colossi weighed heavily on Denise. “I’m always intimidated when I think about them; I don’t feel like I measure up,” she says. “But I also know it would have been such a waste of potential not to pursue my own talent for art.” Every morning she walked 40 minutes across Florence, hefting her portfolio, a packed meal, and a backpack full of art supplies.

European art instruction takes a student-motivated approach, which gave Denise time to paint in class and as she traveled. She made her own watercolors with a mortar and pestle, grinding together paint dust, gum arabic (sap from an acacia tree), and honey. The paint dusts in Europe cost exorbitant amounts of money because they contain highly specified ingredients. (For example, Indian yellow is made from dried urine from an elephant fed only on mango leaves.) Denise didn’t buy a blanket for the first six months she lived in Italy because paint supplies consumed her funds.

Although natural landscapes display the beauty of color, Denise prefers painting the human form because of its character, expressions, and convex overlaps. “Every part of the human body expresses an emotion,” she says. “Even down to the tip of a finger, you can express emotion by attitude and position.” For her paintings, she carefully selects angles that speak to her artistic instinct: “There are sacred proportions that coincide and communicate with us. You feel a composition more than you see it. I can tell when I have the right view for my painting because my insides sigh.”

What Denise feels, the Greeks measured. Greco-Roman artists, as well as the Renaissance giants, used the Golden Ratio (1.61803399) to craft idealized human figures in sculptures and paintings. Artists like Denise have been trained to recognize these ratios in the human body—the distance between pupils, the length of the lips, and the ratio of bone-lengths in the fingers, hands, and arms. Da Vinci’s famous Vitruvian Man shows how the human body produces the Golden Ratio when it’s divided at the navel.

Although form is an important part of choosing a painting, Denise also chooses to paint scenes based on their color and object-to-object interaction. “Painting is like listening to a conversation,” she says. “If I have a boat on water, the boat colors will reflect in the water and the water colors will reflect on the boat.” Recognizing these colors requires second sight. Whereas amateur artists paint black into their shadows, Denise gauges the shadows’ temperatures. She hasn’t seen black in years. “I used to think everyone could see the colors I saw,” she says. “Now I realize it’s a second language.”

Denise owes her colorful language to Impressionists like Claude Monet and Vincent van Gogh, who discovered optical mixing. Mixing pigments creates a boring grey-black color; mixing colors in light creates white. Optical mixing, however, places two colors in their original hue, minus blending pigments, side by side, and allows the mixing to occur in the retina of the eye. Colors then appear even more vibrant.

In addition to her second sight for color, Denise also speaks a different medium-language from most of her fellow artists. While many other artists choose oil or acrylic paints because of longevity, Denise chooses watercolor because of its magic. “You have to yell other mediums into the right place on your painting. Watercolor has a life of its own; I just nudge it to do what I want. Sometimes the paint itself creates more beautiful art than I could.”

As a watercolorist, Denise really is an anomaly. Many of her teachers in Italy were unfamiliar with her medium. Watercolor was used only in manuscript illumination throughout the Middle Ages until German Renaissance artist Albrecht Dürer developed it for canvas painting. Even then, artists continued to use watercolor mostly for sketches. Watercolor remained mostly dormant until Romantic landscapist Joseph Mallord William Turner (J. M. W. Turner) began using watercolor again in the nineteenth century. With a few notable exceptions like Paul Cézanne and Georgia O’Keeffe, watercolor has remained a lesser-used medium.

Thankfully, there are still many exceptional watercolorists to keep the medium alive and thriving. Denise has moved on from her undergraduate at the Accademia in Florence, and she now has a master’s degree from New York Academy of Art. She takes annual month-long research trips to Europe, carrying her paintbrush and camera. “I paint because I must,” she says. “It would be easier not to. I wouldn’t say art is fulfilling. Rather it’s a constant need—never quite satisfied and always craving more. But I still wouldn’t trade it for anything else.”