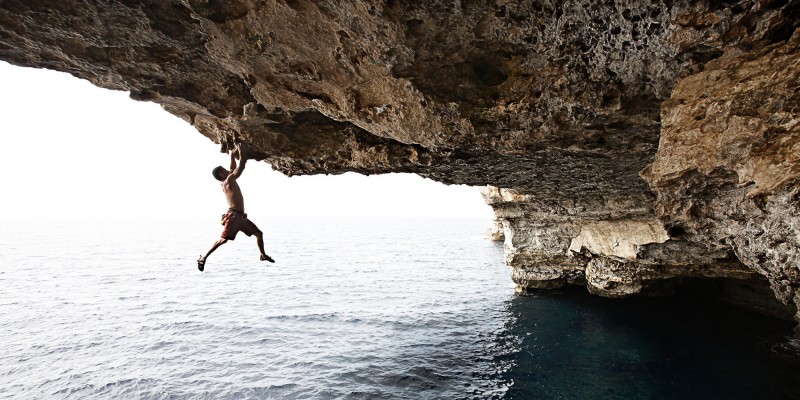 Miquel Riera, “the Godfather” of psicobloc, hangs out above the Mediterranean Sea. Photo by Rasmus Kaessman

Keep your arms in and your feet together as we dive into deep water soloing (DWS)—climbing’s most exotic trend. From the sea-sprayed cliffs of Mallorca to the taffy stacks of Thailand, learn how it all began and explore some of the world’s wildest landscapes for deep water soloing. We’ll show you where to go and what to say when you get there to make your next adventure come off smooth and safe.

Just relax,” you mutter breathlessly. “I’m only 10 feet up.” You pucker your lips, forcing air between them in noisy breaths. The sound of your breathing keeps you sane while the oxygen restores your ebbing grip. Focusing on your footwork and shaking out your forearms intermittently, you spider your way up the limestone stack. Looking down at the ocean as it laps expectantly beneath you—beautiful from a more removed vantage point—you push out another heavy breath and look for the next hold: “Relax, I’m only 30 feet up.”

Toni Lamprecht, one of climbing’s best, tackles a route off Mallorca. Photo by Rasmus Kaessman

The hold is rotten and, crumbling away from the cliff side, dumps you screaming to the sea below. The water’s fullness presses in around you, and tiny beads of air roll along your legs and back, pushing you to the surface. You emerge euphoric—the thrill of being alive amplifies the fall’s intensity—and start kicking toward the shore.

In Spain they call DWS psicobloc, which translates into “psycho bouldering”—an underhanded tribute to deep water soloing’s first practitioners. In this sport, climbers forgo ropes and harnesses, using the water beneath their seaside routes as protection. Don’t let the Spaniards fool you though: the deep water soloist is as sane as any thrill seeker—and typically just as safe.
DWS started in the late 1970s at Mallorca, Spain, where local climbers created a safer incarnation of freesoloing (which adheres to the same principles of DWS minus the water) by taking their passion for stone and sky to the nearby cliffs. The result was a sport that unified the visual splendor of coastal landscapes with the thrill of conquering them.

Since its inception at Mallorca, DWS has grown from an elite cadre of “insane” Spanish locals into a host of amateur climbers and debutante thrill seekers. It thrives at the most popular and beautiful coastal destinations—from the UK’s white cliffs to the limestone karsts of Southeast Asia. In spite of its fringe reputation, DWS is found virtually anywhere that water meets stone.
Any region suitable for DWS is bound to be exotic, but we’ve selected the spots that best combine the elements that make DWS memorable: unique cultural offerings, an incredible landscape, and the rush of climbing.

Ancient Romans first settled in Mallorca for its mild climate, which suited the olive harvests. Now the island’s balmy temperature and spectacular vistas have made tourism its most profitable industry. Mallorca’s reliance on the seasonal flows of tourism favors the autumn climber. When summer’s over, the weather is still great, the flights are cheap, and the beaches are bare for those seeking a discount on the resort island’s many delights.

Though landmarks like Es Pontas attract the world’s best climbers, Mallorca’s greatest lure is its blend of natural beauty and civilization, which enables visitors to live each day in crescendo. Toni Lamprecht, one of the world’s top climbers, summed up days like this in a 2009 interview. When asked why he was considering a permanent move to Mallorca, Toni succinctly replied, “When you sit on a beautiful beach with your friends after a psicobloc-climbing day and you look into the sunset you know why.”

Start your psicobloc-climbing day by lounging on shimmering sands, followed by a climb on the textured contrast of gleaming white limestone over an azure sea—here the colors make you feel like you’re climbing a piece of jewelry. Then cap your experience with a gourmet meal at one of the small island’s 2,400 restaurants. Since Mallorca is built for tourism, you’ll often have an intrigued audience during your expeditions—each fall will draw gasps and roars of applause from your spectators. The routes here favor more experienced climbers, but first-timers will find more than a day’s worth of doable routes in the region—thanks to 40 years of psicobloc exploration. In Mallorca, the synthesis of adventure and amenity is a memorable combo.

The boats in Tonsai provide both transportation and an audience. Photo by GerHard Knopp

If we honor Mallorca for its civility, then DWS in Thailand must be recognized for its catered minimalism. Essentially all DWS here starts at Tonsai Bay, where visitors find huts and climbing outfitters dotting the coast, rather than the towering hotels and souvenir shops of less-exotic locales. Tonsai was built around the climbing industry, so vacationing soloists will have their choice of local guiding agencies, rentable climbing gear, and unlimited deep water potential.

The beach is accessible only by boat, which is also how you’ll get to and from the DWS crags. The formations around Tonsai are climbable year-round and utterly unlike any other features in the world. Limestone taffies sag off the island stacks with Dr. Seuss-like geologic flair. Stalactites droop along the undercut cliffs like melted candles, their stony wax stretching to the Andaman Sea. Thailand’s limestone karsts are not just zany and mesmerizing; they offer the broadest range of climbs suited to any visitor’s ability. Beginners can enjoy the juggy routes of “The Playdium,” while more seasoned soloists can pull on the “Tidal Wave Wall.” Climbers fleeing civilization expect to forgo most luxuries, but Tonsai’s climb-centric attitude ensures that DWS pilgrims have more than they need.

Features like this natural bridge are just a few of the geologic wonders that await travelers.Photo By Philip Peynerdjiev

When they crave simplicity and solitude, climbers search out the towns of Kamen Bryag and Tyulenovo—tranquility’s one-two punch. Kamen Bryag’s biggest “hotel,” a tiny two-floor house, is called World’s End Villa, and Tyulenovo boasts a population of about 60 people. But between these two Bulgarian hamlets is a vast population of DWS routes. Situated on the Black Sea’s Rocky Coast, the region averages a pleasant 82 degrees.

Like the climate, the routes here are generally more moderate and cater to a less-experienced crowd. The landscape is still pristine, but falls are shorter, the holds are juggier, and climbers are less likely to land back first in the water, whale-style. Anywhere along this coast, visitors can camp for free in the numerous caves along the beach. And from atop the sheer-cut terrain, travelers can admire the Rocky Monasteries, an ancient host of Sun cult mausoleums and sacrificial stones. The world has yet to discover these isolated oddities, so pioneer the seaside cliffs and tour the seaside tombs before everyone else does.

For me, climbing is freedom. – Toni Lamprecht. Photo by Rasmus Kaessman

Enjoying an experience usually starts with understanding what’s going on. But if you’ve ever listened to a gaggle of climbers talking, it sounds like they’re speaking another language—because they are. Climbing jargon is basically a marriage between surfer slang and a geologist’s master’s thesis—which can be tough to follow. So take a look at the list below. Even though you may not know what you’re doing out there, at least you’ll sound like you do.

Beta: Advice on how to successfully complete a route.
Bouldering: The practice of climbing on large boulders. Typically protected by crash pads.
Choss: Loose or “rotten” rock.
Crimp: A hold that can be grasped only with the tips of the fingers.
Crux: The most difficult portion of a climb.
Dyno: A dynamic move. Both feet leave the rock face as the climber jumps to the target hold.
Gripped: Scared. Or over-gripping the rock.
Hueco: A hold consisting of a pocket in the rock.
Jug: A large, easily gripped hold.
Karst: Landscape shaped by dissolving layers of soluble bedrock, usually limestone.
Manky: Precariously placed gear or a fragile hold that can break at any moment.
Pumped: A buildup of lactic acid in the forearms that results in a weakened grip.
Rugosity: An area of rock with more texture than its surroundings.
Screamer: A long, loud fall.
Sloper: A sloping hold with little positive surface.
Stacks: A column of rock in the sea that is isolated from the coast by erosion.
Stalter: Using an intermediate hold to travel between two others with the same hand.

So now when you hear beta like this on your upcoming DWS adventure— “The crux by those huecos makes you gripped, but when you stalter through to the manky holds you’ll take a screamer”
— you can smugly respond, “Unless you dyno to the juggy rugosity above,” instead of just nodding your head.