Norway — The Land of the Midnight Sun 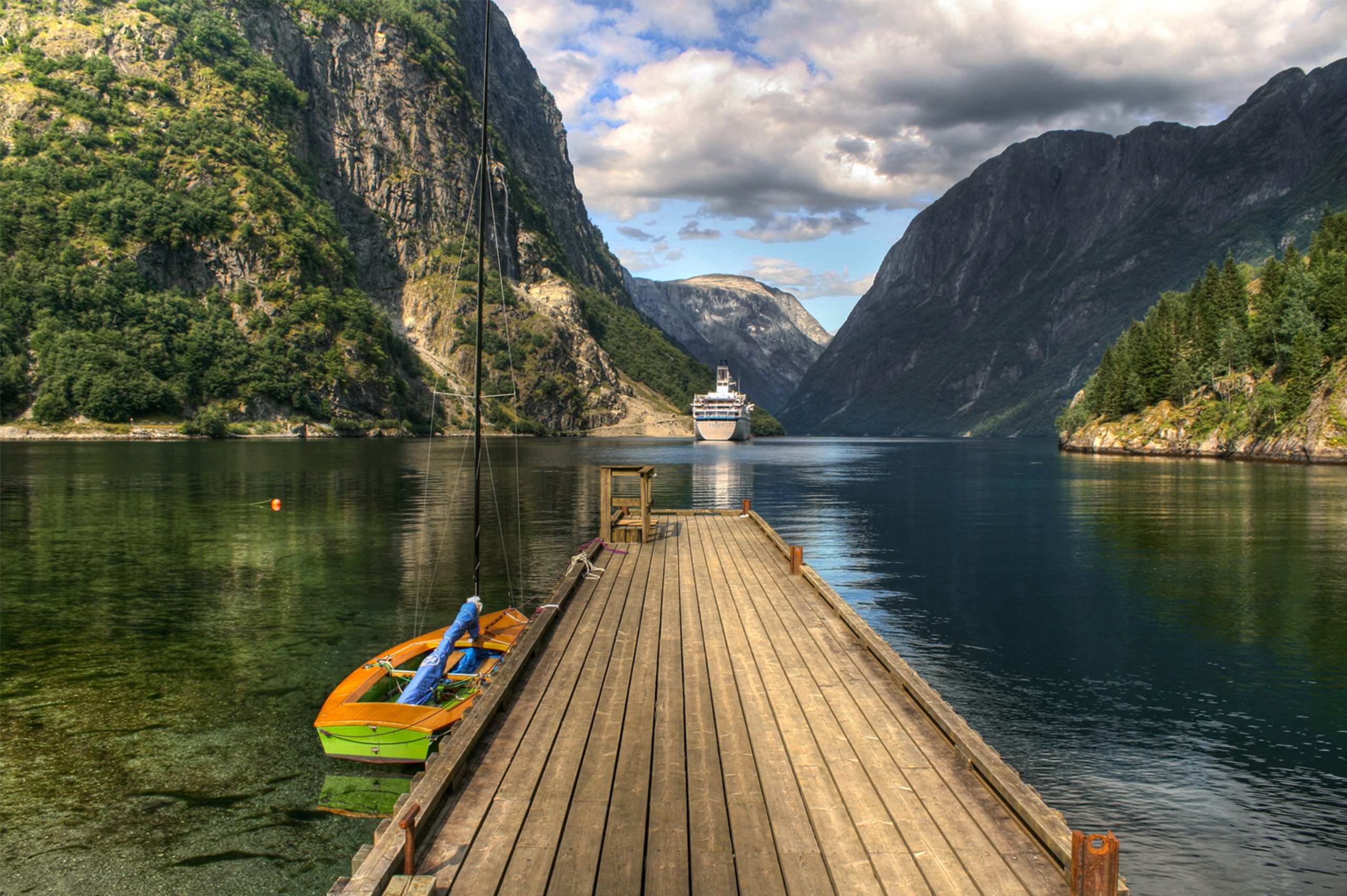 The Land of the Midnight Sun. Photo by Espen Faugstad

Hear the word Norway and the first thing you may think of is a long-bearded Viking sporting a horned helmet and rough-hewn sword, lording over a fjord from the top of a cliff with the northern lights dancing behind him. This Scandinavian country, with its deep-slicing coastal canyons and heaven-scraping mountains, certainly evokes an atmosphere of mystery and magic. From its rich cultural heritage to its stunning scenery, Norway invites visitors to experience natural and indigenous wonders.

One Norwegian says it best when she observes, “Norway is beautiful because nature is simply living its life. No one is pricking or poking at it to ‘make’ it beautiful.” Adds another native, “Norway’s soil is sweeter under our feet than any other dirt. The world cannot be bad when there is so much beauty and majesty.”

When planning your own pilgrimage to the land of the midnight sun, consider visiting the following three cities. As you experience Norway’s culture, partake in its nature, and feel the capture of both its natural and manmade specialties, this spectacular land will leave you with memories that you won’t soon forget.

The impressive façade of Nidarosdomen Cathedral evokes a feeling of reverence and awe. Photo by Romain Pawelec

Culture: Bergen is known as one of the most beautiful places in the world. Your first stop in the coastal city should be Bryggen. This medieval wharf is marked by a winding main street flanked by docks and shipping on one side and steep-roofed wooden buildings on the other. The cobblestoned maze of streets winding between the houses offers hours of meandering fun. Make sure your wandering eventually leads you to Bergen’s world-famous fish market located just down the street from Bryggen. Hopefully, seeing your lunch swimming around right before you eat it will tempt your stomach instead of turning it.

Outside of the main city area on a miniature cliff sits the Edvard Grieg Museum. Grieg is most famous for his musical score to Henrik Ibsen’s play Peer Gynt. The museum was once Grieg’s home, “Troldhaugen,” meaning “troll hill”—perhaps a self-deprecating reference to Grieg’s small stature. Don’t forget to see the authentic Hall of the Mountain King: a winding wooded path leads from the home down a small incline where Grieg’s tomb is carved into the hillside.

Nature: The most popular way to view nature on the west coast of Norway is “Norway in a Nutshell,” a breathtaking trip through some of Norway’s most impressive scenery. You can complete the entire trip in just one day, both starting and ending in Bergen, although longer versions of the tour are available. You’ll take two different train rides as well as a boat ride through Norway’s famous fjords (the Norwegian word for a coastal canyon) and seacoast.

One especially exciting train ride out of Bergen is on the Flåm Railway. The 20-kilometer track careens in and out of mountainsides and has a 5.5 percent gradient for 80 percent of the trip. One of the highlights of the ride is crawling up the side of the Sognefjord, Norway’s largest fjord and the second largest fjord in the world.

Capture: Before you leave Bergen, be sure to climb to the top of Fløyen, the mountain overlooking the city. The hike to the top is on well-groomed trails and takes around 45 minutes. Not only do you get an incredible view of the city center, but your perspective reaches out to surrounding communities and nature areas tucked into different corners of the fjord. Eldrid Antonesen, a native Bergenser, says of Fløyen, “When you stand on the top and look out at Bergen, you feel that now you can die because you have experienced the ultimate.”

Culture: Stop number one in this university town is Nidarosdomen, an enormous gothic cathedral whose construction began in the year 1070. This Lutheran church marks the grave of the city’s founder, Saint Olav. The formidable facade contains statues of 57 saints and other scriptural figures. (Look closely—Adam and Eve are darker than all the rest, underscoring Lutheran theology about the Fall.) The inside of the cathedral is equally stunning, with intricately designed stained glass and elaborate altars. From June 20 to August 20, a special evening mass is held for tourists.

A panoramic view of Trondheim exhibits the city’s charm. Photo courtesy of Markus

Nature: If you go up in the hill area that overlooks the city, you’ll find the picturesque Byåsen Lake surrounded by trees and a woodsy hiking and running trail. During the winter, people often use the lake area for cross-country skiing. During the summer, while the water isn’t hot tub temperature, it will definitely cool you off and is perfect for canoeing in the fall. Not far from the lake rests a good old-fashioned golf course.

Capture: We’ve all heard the old saying about traveling to hell and back. While visiting Trondheim, you can literally experience this journey. Just 20 minutes north of the city rests the small town of Hell, Norway. Only about 500 people can claim that they live in Hell. But if you stop at the train station there, the conductor will gladly stamp your passport, certifying your daring trip to heaven’s antithesis. The town is filled with vintage homes and is right along the fjord’s edge, offering visitors beautiful sunsets and fresh air.

The midnight sun breaks over the Lofoten Islands. Photo by Sigve Indregard

Tromsø
Culture: Tromsø, the largest city north of Trondheim, gives you the opportunity to experience arctic Norway at its finest. Polaria, the arctic aquarium, features the bearded seal, known for its gentle yet intelligent demeanor. You can also view a panoramic film showcasing the beauties of the surrounding area—although you might consider just getting out of the theater and experiencing it for yourself.

The Arctic Cathedral in Tromsø juts into the steel-gray sky. Photo courtesy of Bobfantastic

You should also stop by the Arctic Cathedral and enjoy one of the midnight sun concerts. The triangular construction of the building mimics the surrounding craggy peaks, while the interior features a unique glass mosaic.

Nature: While visiting Tromsø, you are only a 45-minute plane ride away from what is arguably the most beautiful area in Norway, the Lofoten Islands. “This is where Norwegian culture fully expresses itself,” explains one Norwegian resident. Nearly all of the breathtaking photography of Norway comes from this archipelago.

Near the island of Moskenes (which is part of the Lofoten group), you can take a white-water trip of sorts over the infamous Moskstrømmen, a giant whirlpool that flares up twice a day with the corresponding tides. This natural wonder is unique in that it occurs in the open ocean rather than in a channel. Other spectacular nature scenes in Lofoten are almost always accompanied by traditional seaside village architecture. And even as you feel your soul connecting with Vikings of the past, you can get ready to rip and curl with some great surfing near the coastal town of Unstad.

While Norway has gained notoriety with its slew of black metal bands since the 1990s, it’s the nation’s enduring folk scene that echoes the ambiance of the midnight sun. May we suggest— “Ola Tveiten,” by Lillebjørn Nilsen “Sjøfararsong,” by Odd Nordstoga “Heiemo Og Nykkjen,” by Kirsten Bråten Berg

Tromsø offers many creative ways to experience these natural phenomena. Anyone who tees off at midnight on Tromsø’s Golf Course gains instant bragging rights, no matter how far the drive flies. Two other sporting options are the Midnight Sun Marathon in June and the Polar Night Half-Marathon in January. (Both races also sponsor 10Ks and children’s races.) The Midnight Sun Marathon begins at 8:30 p.m., but it’s fairly easy to trick your body into thinking it’s midday with the sun shining in full force. The Polar Night Marathon boasted a temperature of -5 degrees Celsius this year, but a brisk enough pace and the chance of glimpsing the Northern Lights while running should keep anyone warm and distracted enough to finish.