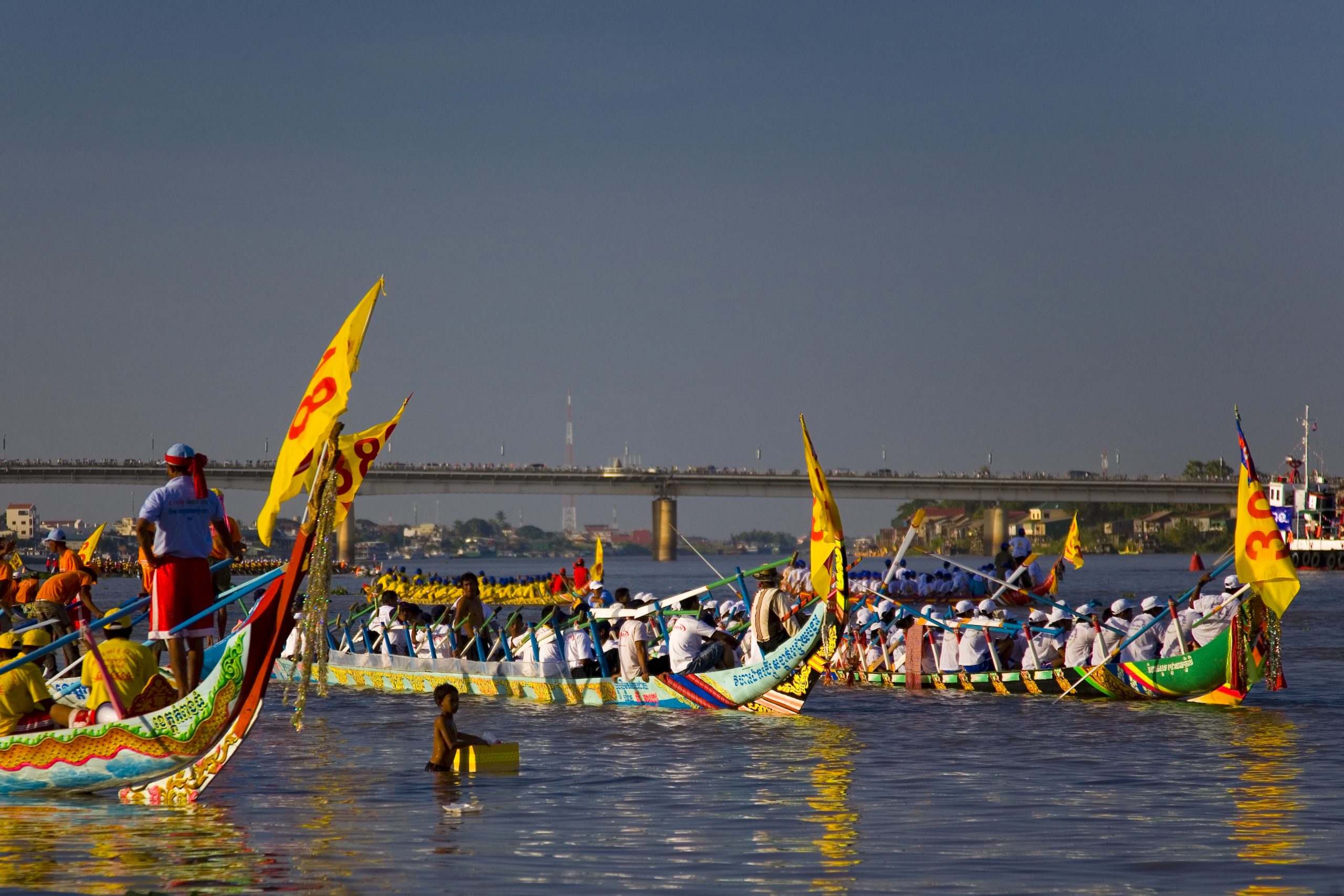 In many ways, it seems travelers come to Cambodia to see what is dead—the land is literally dotted with temple ruins and landmines. Siem Reap is most famous for its ancient temple ruins from the twelfth-century Khmer empire, including the iconic Angkor Wat. Thousands of people travel to Cambodia every year to see the intricate carvings of dancing Apsaras (nymphs), Khmer kings, and scenes from the Ramayana on ancient temple walls—scenes of power, wealth, and riches that have mystically disappeared from the land, leaving only ruins as their last testament.

Many visitors also take time to visit the historical sites of the infamous Khmer Rouge regime. Killing fields, marked by pillars of human skulls; the Toul Sleng Genocide Museum in Phnom Pehn; and schools for child victims of landmines remind visitors of the destruction and crimes against humanity that once took place here.

However, there is more to Cambodia than just its temples and brutal history. Though Cambodia still wears its battle scars, both ancient and modern, there are many reasons Cambodia is still thriving today. Its joy and survival as a nation are best demonstrated by its largest celebration every year—the Cambodian Water Festival, where both past and present are celebrated.

Bon Om Tuk
Some call the Khmer Water Festival the greatest celebration in Southeast Asia. In 2010, Bon Om Tuk, as it is called in the Khmer language, attracted over three million people from all over Cambodia and the world to join in the merriment. Even Buddhist monks, gracing the crowds in their saffron-colored robes, come to watch the boat races from a safe distance.

Each October or November (depending on the arrival of the full moon) Phnom Penh and Siem Reap both host extraordinary boat races, carnivals, and ceremonies, marking the reversal of the Tonle Sap River from upstream to downstream. This natural phenomenon takes place as the current shifts at the end of the rainy season, and all the water that once flowed upstream into the swelling Tonle Sap Lake changes direction to flow back into the Mekong River. This annual flooding of the Mekong River provides vast quantities of freshwater fish, fertility to the land, and livelihood for many Cambodians. Thus, the water festival is a celebration of thanksgiving for the life and sustenance that the river provides.

The traditon of boat racing in Cambodia dates back to the twelfth century, when King Jayvarman VII exercised his naval forces on the water.

On the arrival of the full moon, thousands gather to the banks of the Tonle Sap and Mekong rivers for the annual boat races. Over 400 long, canoe-like boats, representing different Cambodian provinces and peoples, race before the Phnom Penh Royal Palace down a kilometer-long course for sport and prizes. Even government officials sponsor boats in the races in order to create unity with their people. Each boat is maneuvered by a team of skilled oarsmen, usually about 30 to 40 men or women. In the evening, boats brightly decorated with banners and neon lights drift in procession down the river while streams of fireworks light the sky.

This boating tradition dates back to the ancient Khmer kingdoms. On the walls of the Bayon temple are carvings of ancient Khmer naval forces headed to battle. Because of the importance of water in ancient battle, the water festival is also thought to commemorate the success of King Jayvarman VII and his naval forces in the twelfth century. The racing and procession of the boats thus represents the ancient practice of exercising the military on the water to prepare them for the defense of the country. Water festivities were also held during King Jayvarman VII’s reign to keep the river divinities happy and bring bountiful harvests to the land.

Other Ceremonies
Three other ceremonies are also celebrated along with the boat races: Loy Pratip, Sampreas Preah Khe, and Auk Ambok. The first of these, Loy Pratip, is the lighting of the illuminated boats that brightly decorate the waterways. Various government institutions sponsor each of these colorful boats in the parade. It’s a spectacular sight to see the lighted boats floating down the river amid fireworks under a full moon.

At night, the celebrations are illuminated by magnificent fireworks and lantern boats.

Sampreas Preah Khe is the “salutation of the moon” ceremony. During this event, Cambodians give their thanks to the full moon, which—according to tradition—will bring them great harvest and prosperity.

Auk Ambok takes place at midnight, when all gather at temples to eat ambok, a holiday rice dish consisting of rice fried in husks, served with bananas and coconut. Although ambok is the special food for this specific event, it is also sold throughout the entire three-day water festival. A special ceremony held within the temple is the lighting of 24 candles, representing the 24 provinces of Cambodia. As each of the candles burns, the wax melts and drips onto banana leaves. Some believe that the shapes of the wax on the leaves will forecast the level of rainfall in each province, predicting the success of each city’s harvest.

Planning Your Trip
To experience the real excitement and splendor of the Cambodian Water Festival, Phnom Penh is the place to be. It is in this city that the most spectacular events take place for the water and moon festivals. However, savvy travelers must plan ahead if they want the best view of the races. There are many hotels along the Tonle Sap and Mekong riversides where travelers can watch the races from their own balcony. The Foreign Correspondents Club (FCC) has been praised for having the best view of the races and fireworks. But because it has very few rooms, you must make your reservations early.

If you cannot get a hotel with a river view, there are many restaurants with good viewing areas—and there is also a viewing stand for foreigners that Cambodia’s Ministry of Tourism has provided right next to the main grandstand. Even if you can’t find a good view, the excitement and merriment in the streets of the city will provide vast entertainment.

Though Phnom Penh is where most of the excitement lies, for the traveler who is more concerned about safety than spectacle, Siem Reap may be a more favorable choice. Because of the large crowds that Phnom Penh attracts to the festival, the city can become somewhat hazardous. Last year, a great tragedy occurred when many people were killed by a stampede on a narrow bridge during the festival. Many wondered if the 2011’s water festival would be cancelled due to this misfortune; however, not even catastrophe can halt Cambodian tradition. Instead, developers are building more bridges to disperse foot traffic and to prevent future tragedies.

Siem Reap has begun to organize its own boat races for the water festival on a smaller scale. It is also the site of the original boat races of King Jayvarman VII, and depictions of these ancient maritime battles and competitions can be found on the temple walls of the Bayon and Banteay Chmar. Besides Siem Reap’s safety and historical advantages, who wouldn’t like to see the boat races with the majestic backdrop of Angkor Wat? Though the celebrations in Phnom Penh are certainly bigger, Siem Reap still has plenty of boats, fireworks, and celebrations to offer.

Celebrating the Past and Future
Although Cambodia as a nation is still recuperating from its tough past, it is home to a people who value its grand holidays. The Cambodian Water Festival is a celebration of life, thanksgiving, and victory for the Khmers. This three-day event is a must-see for the world traveler. If you are looking for food, culture, entertainment, and festivities—Bon Om Tuk will not disappoint. Full of color and life, the Cambodian Water Festival is a grand spectacle for even the most adventurous traveler.