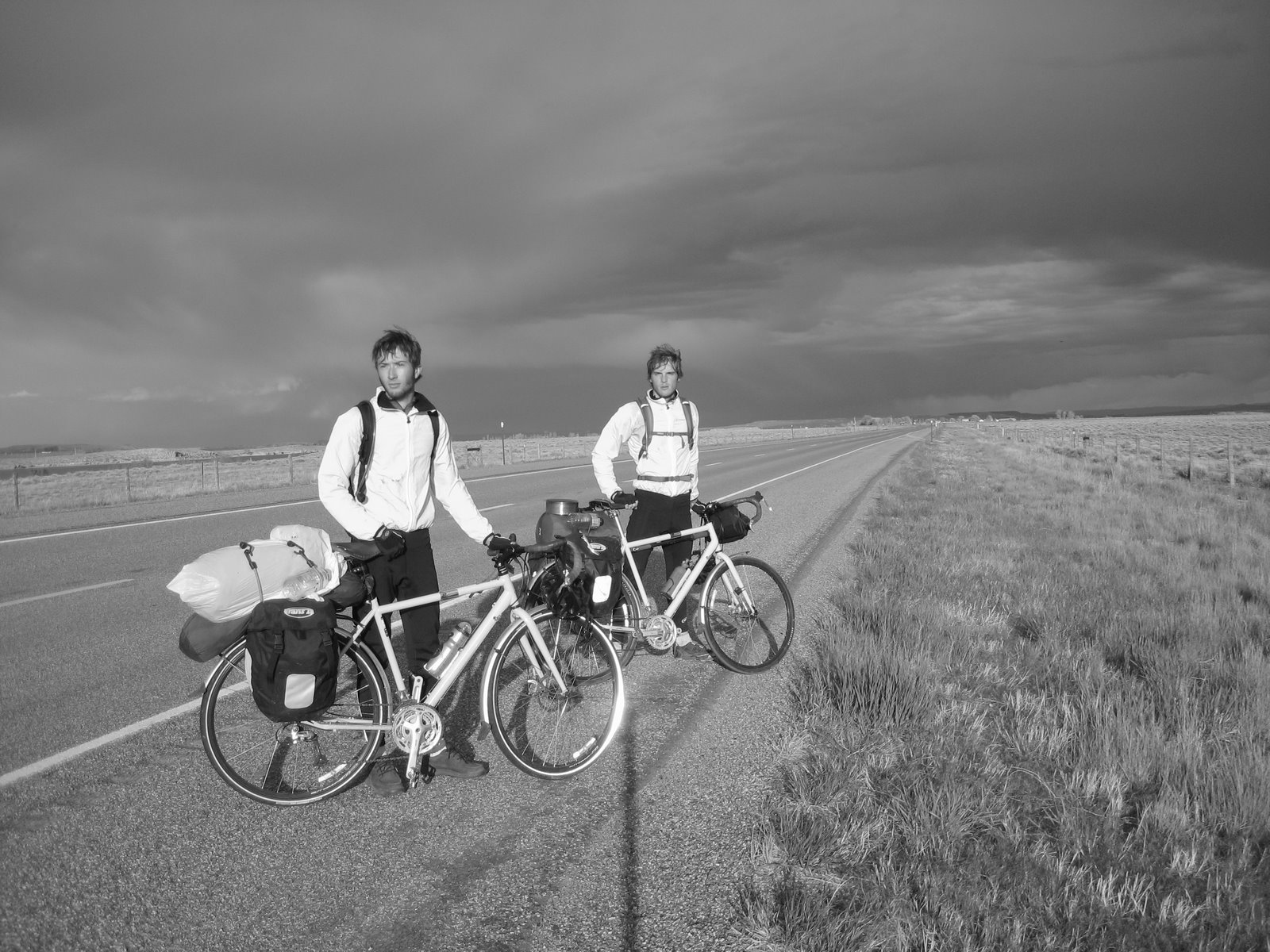 After just two days, their arms were sore, their legs had cramped, and they still had 3,000 miles left to go. They slept on the cold, hard ground and ventured into rainstorms. But Eric Brewer and Matthew Case couldn’t abandon their friendship motto of  “living life legendary.” “We felt like this trip went right along with that motto,” Matthew told me. As both bikers recounted their experience on the bike trip, I gleaned their excitement in telling their story—even though it had been two years since their trip.

Matthew and Eric had been best friends for years, and for much of that time they joked about taking a coast-to-coast bike trip. They started seriously considering the idea right before entering college. “My dad, Scott Brewer, did a similar bike ride when he was 21, and we thought it was cool,” Eric told me. A few years later, their joke became a reality.

Tasks before the Trip

In preparing for such an extensive journey, the two divided the tasks between themselves—Eric planned the route, and Matthew gathered the gear. Because they were also enrolled in university classes, it took several months to fully prepare. “We spent a lot of our free time preparing for the trip,” Matthew told me. But even those months of planning didn’t completely prepare them for it. They had no way of knowing all the adventures that would come—from the people they would encounter, to the physical and mental hardships that would come along the way, and even the small miracles that would happen when everything else seemed to go wrong.

May 8, 2008, marked the day they planned to leave, but they were faced with a serious problem—Eric didn’t have his bike. Miraculously, a large package arrived that very morning, and the bike inside was assembled just in time for them to walk to the Greyhound bus that would take them from Utah to Oregon so they could start on the coast.

Eric smiles in Illinois after passing over the then-flooded Mississippi River.

Starting on the coast of Florence, Oregon, they rode their bikes for several miles until they hit their first obstacle—the Cascade Mountains. With an elevation increase of over 4,000 feet, they were certainly in for a surprise. “Those hills were killer,” Eric recounted on their blog. “It seemed as though they would never end.” He admitted to me that neither he nor Matthew “had trained very much and weren’t in the groove of biking either.”

It was especially grueling in the terrible weather con-ditions that followed. “On our way up, we ran into a bunch of snow,” Eric blogged. But when I asked if they’d ever considered giving up, Eric was quick to respond: “We always knew we could do it and finish it. We were pretty dead set on doing it.”

SURPRISE! Nebraska that is.

After making it past the steep mountains, they found themselves faced with another problem—lack of food. While battling steep hills, headwinds, and bad weather, they found themselves in a constant state of hunger. “We would need to eat about every twenty miles,” Matthew told me. “We estimated that we were burning about 7,000 calories a day that need to be replenished. We’d eat whatever we could get our hands on.”

Matthew told me one of his favorite eating experiences: “One time we went to CiCi’s Pizza, which is a pizza buffet. We went there and ate a bunch, and then we felt that ‘after-lunch tiredness.’ We both fell asleep at the table. And then we woke up, ate again, and left.”

Eric and Matthew slept in their tent the vast majority of the trip, like this secluded spot outside of Brothers, Oregon.

These weren’t their only encounters with odd eating habits. About a third of the way through the trip, they figured out some creative ways of getting all their calories, like devouring entire half-gallons of milk with cheap cereals, or downing as many McDonald’s double cheeseburgers (nicknamed Double Smackers) as they could. Even on their more relaxing days, they were almost always hungry. During the trip, Matthew recorded, “We’ve been extremely hungry, even though we haven’t done anything for the past two days.” Eric recorded, “We just sat for a long time and ate. Yesterday we ate a lot, and we ate a lot today.”

Unlucky, but Not Luckless

“Nothing could stop our momentum, not nails, and not road rash from wrecks,” said Matthew.

On June 1, almost a month into their trip, Matthew and Eric ran into a bit of bad luck—both had flat tires, and neither had the necessary supplies to fix them. Fortunately, the two were at a gas station and were quickly offered a ride. Unfortunately, they would spend the next hour fearing for their safety. “We accepted and soon realized that this would be a car ride to remember,” Eric blogged that night. “The three other men in the car, including the driver, were all drinking beer.” Luckily, they “made it to Casper alive” and got their flat tires fixed.

“We took everything with laughter, even using a Band-Aid to reinforce a patch on Eric’s tire.”

A week later, they were in Nebraska—and with that came the thunderstorms. “The first night it rained,” Matthew blogged. “And as we rode the second day, it rained like I have never seen in my life! Imagine racing down a road at 30 mph, completely soaked, with water dripping off your face and barely being able to see in front of you because the rain is falling so thick, and the only thing keeping you from getting hypothermia is the fact that you continue riding your bike!” But they were still several hours outside the nearest town. “We knew we had to pick between two choices: make it to Hemingford, or die a very cold, wet death on the side of the road. We chose life.”

Once they arrived in Hemingford, they met a kind couple who owned a local bed and breakfast. “They actually let us stay with them free of charge,” Matthew shared on his and Eric’s blog. “We feel so richly blessed by their kindness and charity, and we only wish we could do something in return to show them how thankful we are.” But they had to continue on their bike trip if they were going to make it to Carolina Beach.

The next day they headed out on the road facing beautiful weather and with good tailwinds at their backs. Unfortunately, this wasn’t a sign of what was to come next. “We hadn’t gone more than 16 miles when I looked down at my front wheel and felt that something was wrong,” blogged Matthew. “I reached for my brake to check it out when all of a sudden my entire front wheel fell off my bike, shattering my front fender and sending me flying over the front handlebars. It all happened so terribly fast, but I remember Eric (who was riding close behind me) crashing into my suddenly stationary bike and then sliding belly first on the asphalt.” Amazingly, Eric had no injuries, and Matthew came away with only a few scrapes, a messed-up jersey, and a banged-up bike. Good fortune struck again when a young man in a truck pulled over and offered them a ride to Alliance, Nebraska.

Eric and Matthew stayed one night with an Amish family in Illinois, sharing great food and stories and learning how much they had in common with these kind and giving people.

Are We There Yet?

Matthew and Eric pressed forward, moving from Nebraska to Iowa. Though Iowa is filled with rolling hills, they rode most of the way through without any major difficulties. Within a few days, they reached Illinois. To keep on schedule, they were biking between 50 and 75 miles a day. Illinois turned out to be a breeze, which was fortunate as they made a few stops at historical sites along the way.

Soon they were in Indiana, Matthew’s boyhood home. After they crossed the  Mississippi River, they left the small towns of the West and entered the large cities of the East. Though the cities were larger, the states were smaller, so they passed through more states in less time. Within a week they barreled through Kentucky and Tennessee and made it into North Carolina—their last state.

The bittersweet end of a life-changing journey to Carolina Beach, North Carolina.

On July 10, 2008, more than two months after leaving the Pacific coast in Florence, Oregon, Eric and Matthew reached the Atlantic Ocean’s Carolina Beach, North Carolina, welcomed by a crowd of family members.

Was It Worth It?

“Yes, a thousand times,” Matthew
said. “It was one of the best experiences of my entire life, and I think it will remain there.”

Biking 129 miles over five mountain passes for a combined climb of 15,000 feet is a daring feat for any cyclist. When done in one day it is called the Death Ride. This tour of the California Alps is possibly the greatest challenge a bicyclist could ever face. In 2010, the event brought 3,500 riders ready to face that challenge.