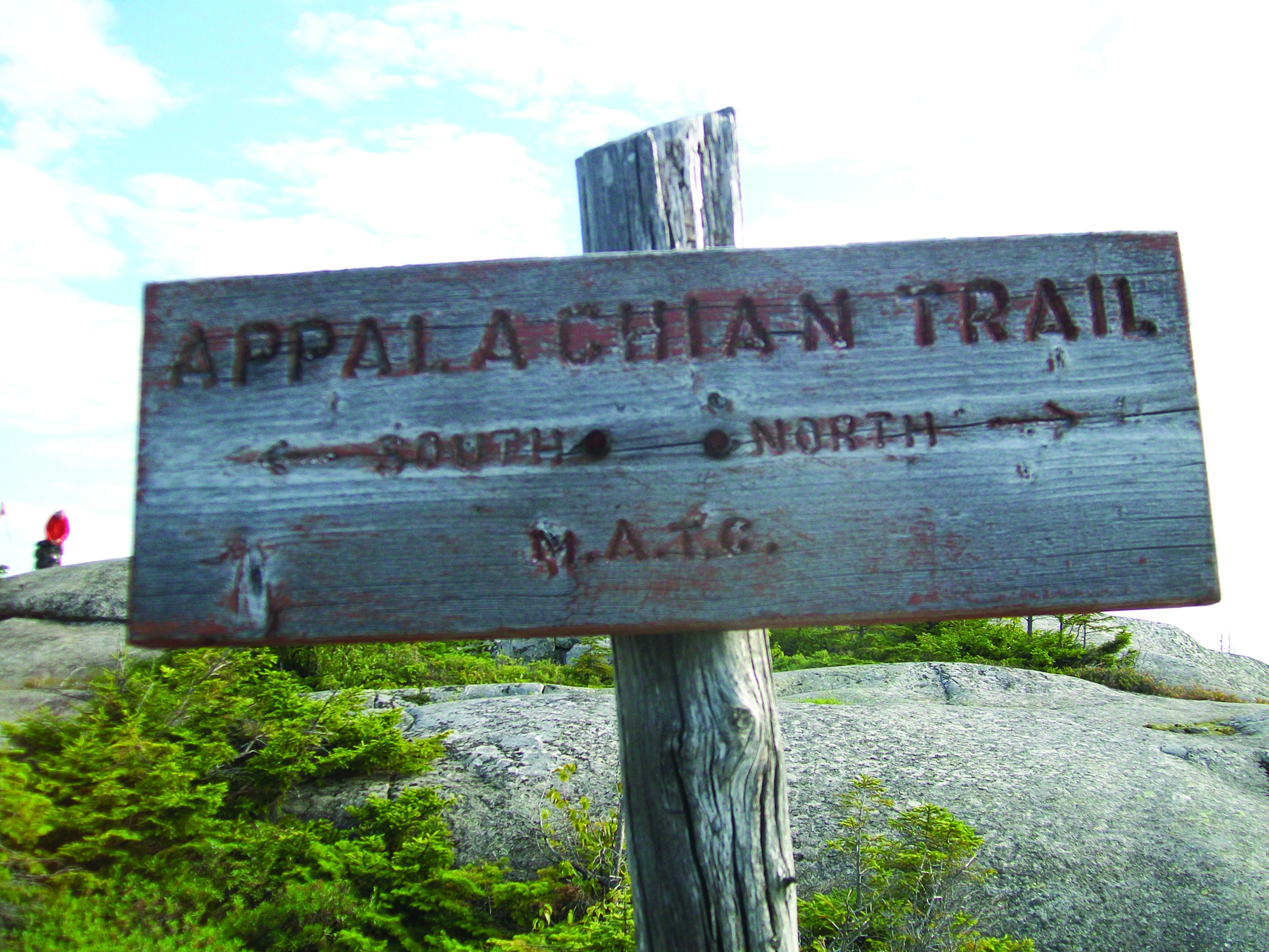 Calvin Lawrence takes in the scenery atop “Charlie’s Bunion” in Tennessee.

Calvin Lawrence has hitchhiked into town, fallen and rolled 25 feet down a rocky slope, traipsed through cow pastures, ridden 36 hours on a bus, and hiked more than 1,600 miles—all in six months. An avid hiker and camper, Lawrence has immersed himself in the lifestyle of the Appalachian Trail. “I like the freedom of having no responsibilities,” he says. “Hiking the trail is like taking a break from life while still enjoying life-changing experiences.” As a thru-hiker—someone who hikes long distances—Calvin has had some life-changing experiences. He hiked most of the trail on his first hike in 2009 and has a second hike planned for this summer. His goal this time is to hike the entire trail—and also to have another fun adventure.

Calvin shared with Stowaway some of his insights about hiking the Appalachian Trail.

As an introduction to our readers, tell us a little about yourself. Where are you from, and do you do a lot of hiking there?

A term I’ve heard used recently is “hiker trash,” and I guess that applies to me. It basically means that I live to hike. When I’m not on a trail, I’m saving money for my next adventure. My plans for the future don’t extend any farther than the end of a map. I’m from Fort Wayne, Indiana. The area’s suited for farming, but it’s  severely lacking where hiking is concerned. I find the flat terrain monotonous.

Why did you choose to hike the Appalachian Trail?

Most people I talked with didn’t have a simple answer for this. It’s usually something like “I’ve always wanted to do it” or they give you some philosophical quote about “seizing the day.” I chose to do it because I needed an adventure after high school, and I figured walking 2,000 miles would keep me entertained for a while.

How did you start your hike?

My parents drove me to Georgia. We spent the night in a lodge, and I started hiking the next day. The whole way there I was mentally going over my gear to make sure I didn’t forget anything. When I reached the trail I was so excited I just threw on my pack and started walking. I didn’t even say good-bye.

What were your feelings as you began, and how did those feelings change?

I remember thinking “this isn’t so hard. I’ll be in Maine by next week.” After a few weeks it really hit me that the trail was real and the average six-month completion time I’d heard about was real too.

Trees along the Appalachian Trail are marked with this unique symbol to ensure that hikers stay on course.

What is the trail route?

The trail runs through 14 states from Georgia to Maine. Most people who thru-hike will go in one direction, either north or south. After covering the first 460 miles I knew I wouldn’t be able to finish the next 1,700‑plus before winter hit, so I decided to take a bus up north and start hiking south.

Okay. You say most people hike in one direction, but do the rest switch directions like you did?

I’ve heard that “flip-flopping” like what I did has become more common in recent years. People have time restraints and want to reach certain parts of the trail or, like me, they’re trying to beat the weather.

Since weather is such a big issue for hikers, when is the best time to do a thru-hike?

On average a thru-hike takes five to six months. This means that you will be walking through at least two seasons. Most people who hike north choose to start sometime in March and plan to finish by September. People hiking south typically begin in June and aim to finish by December.

How is trail life different from normal life?

Everything takes more time. Making a meal isn’t as simple as going to the kitchen. Sometimes you have to walk half a mile out of your way to get two cups of water. Even small towns seem huge when your only transportation is your feet. Weather has a bigger impact on your life when you’re outside for a week straight.

Describe your typical day on the trail.

I wake up at maybe eight or nine o’ clock—I was one of the later wakers—then eat a quick breakfast like a Pop-Tart or granola bar and start packing up. Then I’d start hiking. Somewhere in there I check my guidebook to see what kind of stuff I’ll be hitting that day and find out where I’m going to be. Then basically just walk, take a break if I feel like it, and just try to reach my goal for that day.

What kind of goal would that be?

Just try to get to the next shelter, or the next town, wherever I’m trying to get to.

What do you carry with you?

I carried everything I needed to live. Since weight is a big concern, my pack was whittled down to the basics: food, water, and things to keep me warm and dry. I also carried
a few luxury items for entertainment, such as a novel and
my MP3 player. I had my cell phone and a first aid kit
for emergencies.

Did you ever have any emergencies?

What were those injuries from?

I was on a large smooth rock that was tilted about 30 degrees, and I tripped. I rolled about 25 feet and scraped my knee a bit. No big deal, I just put on a bandage and kept walking. The burns were of the typical campfire variety.

The forest thickens on this portion of the trail in the Hundred-Mile Wilderness, Maine.

What’s the hardest part about hiking for so long? How did you deal with it?

The hardest part is the mental game that you play to keep yourself going. Hiking every day for six months becomes
like a job. You have to constantly remind yourself that you are there by choice, and although you may not be enjoying it at the moment, it will get better. One of the sayings that I heard often was “your worst day on the trail is better than your best day at work.” I completely agree with that.

What kind of people did you meet?

The trail is like a magnet for people at transitional stages in life. The two largest groups I saw were recent graduates and retirees. I met people from all across America, as well as from Europe and Australia. Some people were veteran hikers and some were out for the first time.

Did you have a lot of people at home following your progress?

I did my best to call home every few weeks—and when I did, my mom always said everybody was asking about me. My family bought a large wall map of the trail so they could track my progress, and many of my friends were excited to read my updates on Facebook.

I know thru-hikers get “trail names” on their hikes. What’s yours and how did you get it?

My trail name is “Torch.” It was given to me after I used a flaming stick to chase a family of mice out of a shelter.

How did you feel when you left the trail?

When I was forced off the trail by weather, I felt like I had failed myself and everybody at home who had been following my progress. Within a few days, I came to terms with it, realizing that I was lucky to have accomplished as much
as I had.

To finish, tell me one crazy story from your hike.

Okay, I’ll tell you the donut story. One guy I was hiking with, he had been homeless for a while, so he had some experience living on the streets. We were in a town and there was a Dunkin’ Donuts, and we decided to check the Dumpster. We found a garbage bag full of donuts and decided to take it back to the hostel we were staying at. There was a group of probably 10 to 15 hikers. Hikers are notorious for eating huge amounts of food, especially junk food, so we decided to make it a challenge and see if we could work together to eat this 50-pound bag of donuts.

Was it really 50 pounds?

I could barely lift it. We had to use a tricycle we found at the hostel to wheel it back to the hostel.

Did you guys finish your challenge?

Nope, there were still donuts left three days later when we left. Everyone got sick of donuts after about the first hour.