The World in a Fruit Basket 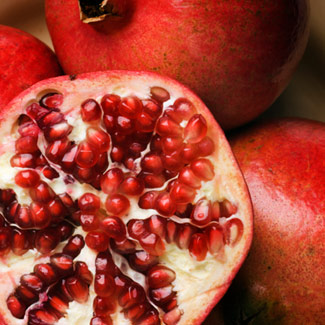 I’m not exactly an expert on anything—I’m not a world-renowned traveler, a famous writer, or a gourmet chef. But I do know what it means to be a broke student with wanderlust. I’ve always had big dreams of traveling and photographing the world, but lately I’ve learned to satisfy my thirst for new cultures by getting a taste of other cultures—literally—through the fruits they eat. As it turns out, you really can fit the world in a grocery cart. Here is some of what I’ve learned.

Pomegranates have been around for a very, very long time; they were embroidered on the robes of priests in the Bible, were used as decoration in the Elizabethan Era, and are currently prized for the syrup (made from pomegranate juice) used in Indian cuisine. To pick a good pomegranate you need to know your seasons. The United States cultivates its own crop, but these fruits aren’t available until about January. Outside of the States, the fruits can be ready for export as early as September. When picking a pomegranate, choose a fruit that feels firm and isn’t too dented. To open up the fruit, slice off the ends and then quarter the rest, just like you would with an orange.

Do a quick internet search, and you’ll soon find that there are almost as many varieties of mangos as there are people. Mangos are one of the most popular tropical fruits found in your grocery store and are used in everything from traditional Thai desserts to spicy Mexican salsa. To tell if a mango is ripe, feel the end opposite the stem—if it has just a little give to it, then it’s ripe. The easiest way to cut a mango is to stand the whole fruit on end. Then cut through the fruit on either side of the stem, leaving about an inch in the middle; this is where the seed is. Dice the remaining fruit (while it is still in the skin); then turn the fruit inside out by pressing up on the outside of the skin. The fruit can now be easily sliced off.

Açaí is one of the newest rages—you can find the juice in most health food stores. The original fruit looks something like a blueberry and grows on palm trees in Central and South America. While it is currently being touted as a super-antioxidant (antioxidants help prevent or repair damage done to the body), it can also give you a little taste of Brazil, where it is enjoyed with granola and other fruits. Unfortunately, the whole fruit is nigh impossible to export, so you can get only the pulp (frozen or freeze-dried) in the United States. To have the best açaí experience, look for an unfiltered juice; the pulp is good for you and will give you a better idea of the true taste of açaí. Double-check the ingredient label and pass up any juices that use lots of fillers.

Figs and dates play huge roles in Middle Eastern cultures, especially around the time of Ramadan, a ritual fast observed by followers of Islam. The morning meal, called Suhoor, occurs before sunrise and may include dates and yogurt. Observers then fast until sunset, when the Iftar, or the evening meal, is eaten to break the fast. Figs and dates are both major parts of this meal. While some markets are beginning to provide these fruits as they ripen, they are most easily found in dried form. Try a bowl of plain yogurt topped with dates or figs and a little honey to get a taste of these fruits.