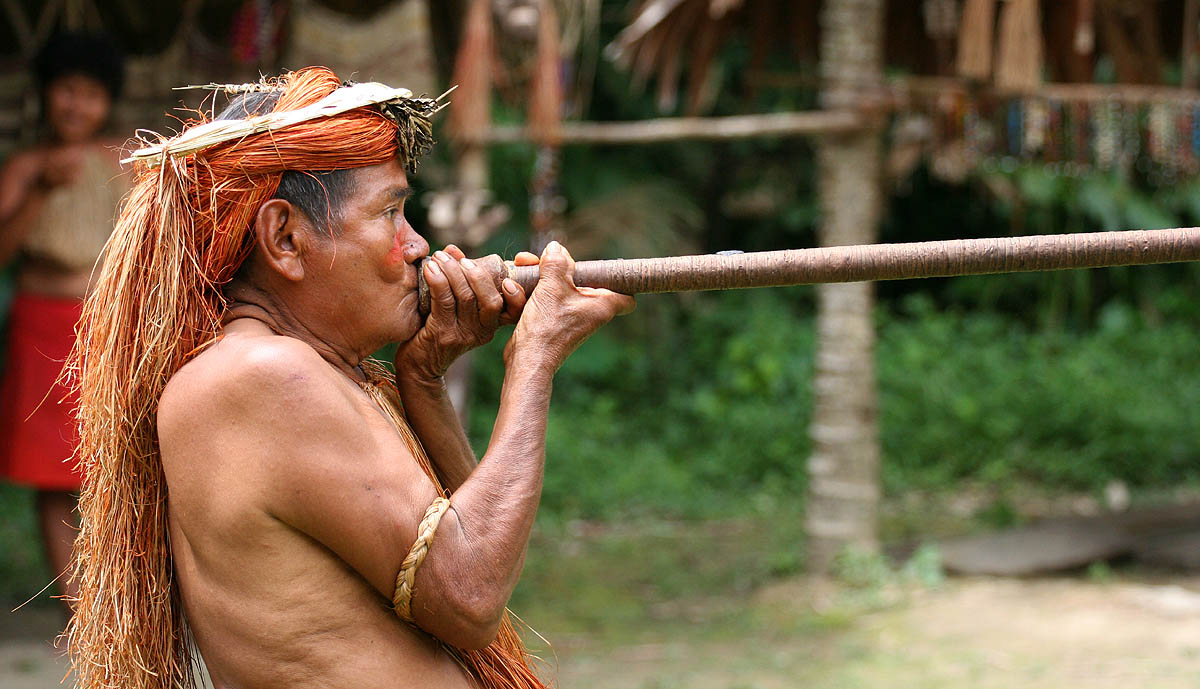 From culture to conquistas, rock-climbing to reggaeton, llamas to piranhas, Peru has something for everyone. Due to its diversity, accessibility, and, above all, affordability, many are familiar with the attractions this country has to offer.

But what about the unknown, the awe-inspiring, the mysterious, and the wonderful? Peru has that too. Welcome to your lesson on South America’s best-kept secrets.

Few visitors to Machu Picchu know about the hike up Huayna Picchu, the mountain behind the city. Photo courtesty of escapedtoperu.com.

The city of Machu Picchu, which literally sits on top of a mountain, was built by the Incas in AD 1400, abandoned during the Spanish conquest a century later, and rediscovered in 1911 by American historian Hiram Bingham when locals showed him the folklore city in the clouds. Recently the city has had an influx of millions of tourists a year, coming to see its grandeur.

But don’t become one in the crowd. Climbing Huayna Picchu, the peak behind the ancient city, is the most exclusive and exhilarating hike for visitors itching for a new view of this New World Wonder.  The number of hikers is regulated, so show up as early as 4 a.m. at the Machu Picchu ticket gates to be one of the first 400 people in line. The summit provides amazing vistas, particularly at sunrise. For many, this hike up Huayna is the highlight of their visit to Machu Picchu. You can even receive a special passport stamp for visiting.

Large figures created in the desert of Peru were made by extraterrestrials, or so some think.

The Nazca Lines, found in south central Peru, are like the inexplicable Midwest crop circles, inspiring the questions: who made them and why? The area of these geometric shapes equates to 310 square miles. For centuries they were largely forgotten until airplane pilots began to notice the strange caricatures etched into the ground. There are nearly 800 lines and 300 figures, 70 of which depict plants and animals.

See a curvaceous monkey spanning nearly 300 feet, a condor with a 430-foot wingspan, and an enormous hummingbird, spider, and humanesque figure called “the astronaut” for its bulbous-like head. Some experts hypothesize that these figures are part of an elaborate astronomical calendar created with rope by the Nazca culture. Others argue that the lines are walkways for a fertility cult, a running track for giants, or landing sites for extraterrestrials. Take your pick. However they were formed, they are worth seeing for yourself. Form your own opinion as you visit the observation tower or book a flight. But remember, walking on the Nazca Lines is forbidden.

Peru has various degrees of jungle scattered throughout the highlands and lowlands, but the best area is at its heart: Iquitos. This sassy, savvy, and at times manic metropolis is the largest city in the world that is unreachable by road. You have to either fly in by plane or come in by boat. But it’s worth it.

Buy a cheap day- or week-long jungle excursion tour while in the city instead of booking it online, which could cost five times as much. These tours take you on a speedboat into the depths of the Amazon River Basin to a remote bungalow site on the shore, where your potential activities are many. You can take midnight hikes through mud and mosquitoes to see freshly caught tarantulas and crocodiles. Or you can fish for piranha, watch for rare pink-bellied dolphins, and visit the native tribes in the forest. Shooting a native dart gun or joining in drumbeat dances is always fun.

Some native cultures of Peru live on floating islands.

Lake Titicaca is the highest lake in the world, South America’s largest lake, and the world’s largest lake above 6,561 feet. But it’s more than statistics that makes this lake unique. It’s the crisp, clear air, the luminescent sun dancing on the water, and the inhabitants of the reed islands living as they have for centuries. The lake, which borders Peru and Bolivia, is most readily accessed from the port in Puno, Peru. Boats leave the port for the reed islands multiple times a day.

The Islas Flotantes (Floating Islands) of the Uros people are the most popular places to visit. While they are surprisingly commercialized, there is still nothing like them. Everything is built from buoyant totora reeds that are found on the lake shores—boats, homes, and crafts are all woven with these reeds and a touch of Uro culture. Floor reeds are replenished daily, leaving the ground spongy. 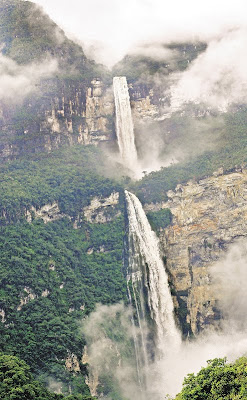 The Gocta Waterfall is the third largest in the world, yet it was only discovered five years ago. Photo courtesy of blogsperu.com.

The third largest waterfall in the world at 2,530 feet, the Gocta was discovered only five years ago. Of course the locals knew about the towering two-tiered waterfall, but it wasn’t until 2006 when German engineer Stefan Zienmandorff stumbled across the falls that it was brought to the attention of the Peruvian government. Incredibly, five years later the site is still virtually undiscovered by tourists. Peruvians, some Europeans, and a Wall Street Journal reporter have been among the few visitors to make the five-hour hike to see the falls.

According to local legend, the waterfall is home to a beautiful blonde mermaid, who keeps a golden bowl guarded by a giant serpent. Hike through the northern virgin jungle; enjoy the scenery rich with toucans, hummingbirds, and monkeys; and end with a refreshing dip in the waterfall’s pool. No siren sightings yet.

El Misti is a thrilling hike.

One of Peru’s most mysterious active volcanoes sits nonchalantly at the edge of the country’s second largest city, Arequipa. At 19,101 feet, El Misti is the lone guardian towering over the white-rock city. Because its last major explosion was in 1985, you might approach the giant with stories of Pompeii and Vesuvius in your mind. Nevertheless, many hikers, climbers, explorers, and city folk have enjoyed exploring this wonder—and you can too. El Misti offers several permit-free hiking and rock climbing routes. The volcano takes two to three days to climb. You should do the hike with an accredited tour guide in Arequipa to avoid robberies. (As you are selecting a guide, ask to see the little black book that identifies trained guides.)

The volcano base is only ten miles from the city center, so getting there and back is no problem. Getting up and down is the hard part.

Andean condors are one of the rarest endangered birds of prey but they can still be seen in the wild in Peru.

For years a controversy raged over whether or not this canyon, found 100 miles outside of Arequipa in southern Peru, was the deepest canyon in the world. (It’s twice as deep as the Grand Canyon at 10,469 feet.) Colca remains a must-see as it is home to pre-Incan terraces still used today and outcropped nests of the rare wild Andean condor.

The endangered birds can be seen at the Cruz del Condor lookout spot. For $2, you can watch the condors glide effortlessly on the canyon thermals, at times swooping over watchers’ heads. The condors are best seen in the early morning and late afternoon when they are hunting.

Few places offer the diversity in scenery like Peru does. From ancient cities to waterfalls, volcanoes to canyons, floating islands and more, Peru will leave you awestruck and inspired at Mother Nature’s handiwork. Even if you can go to just one of these locations, experience what Peru has to offer—the new, the old, and the wonders many travelers haven’t discovered yet.